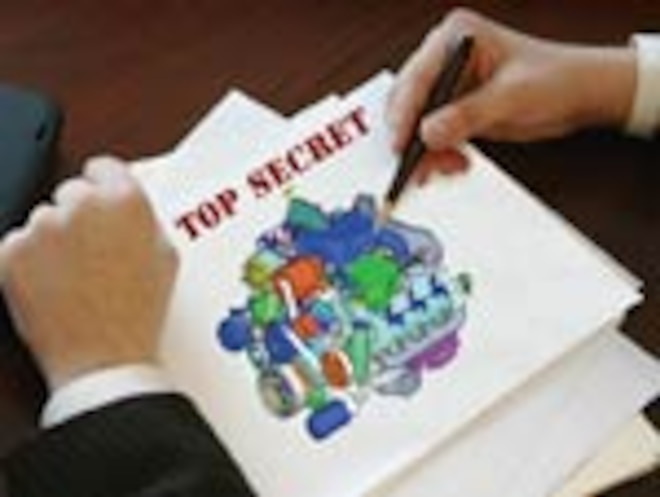 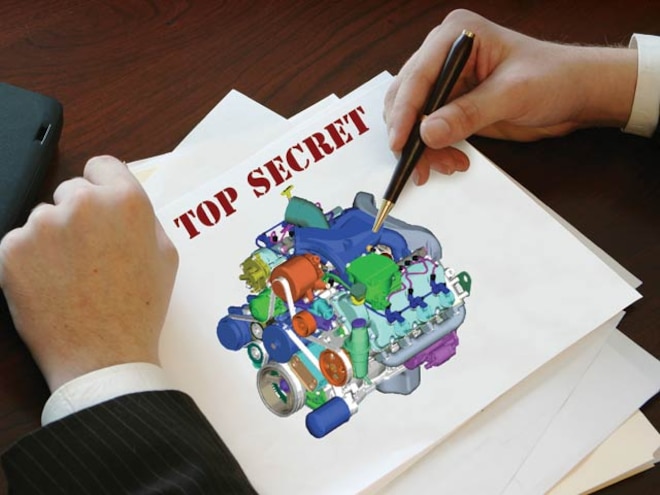 View Photo Gallery | 19 Photos
Photo 2/19   |   new Cummins V6 And V8 lead Photo
New V-6 and V-8 Cummins engines are on the way. At the end of July, Cummins Inc. announced that it will "develop and manufacture a family of high-performance, light-duty diesel engines." This follows nine years of work with the Department of Energy, where the new V-6 and V-8 powerplants were tested in a Dodge Durango and a Ram 1500. So what happened? View Photo Gallery | 19 Photos
Photo 3/19   |   Comparison of Phase 2 V-6 versus Phase 3 V-8
What happened was this: The new Cummins V-engines made great power, produced superior fuel mileage, were fairly quiet, and met the government's strict '07 emissions guidelines that require the exhaust to be cleaner than the air in Los Angeles. The results were so good that one phrase gets repeated over and over in DOE/Cummins documents: "There is a path to market for the light truck diesel." We think that's absolutely correct, and here's what we know about these engines that should be available by the '09 model year. 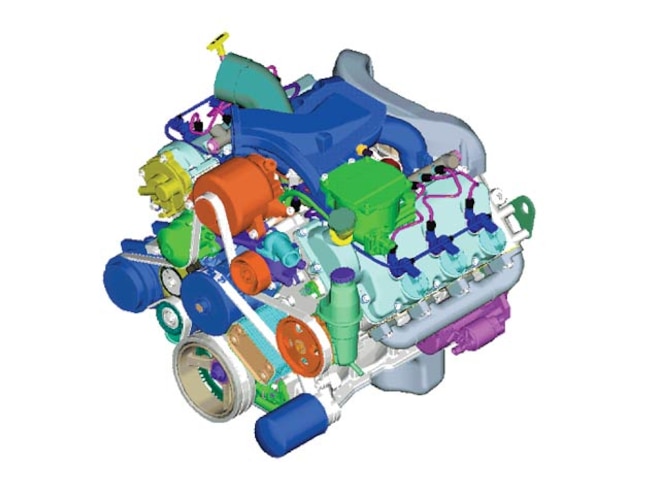 View Photo Gallery | 19 Photos
Photo 6/19   |   The performance curve for the 5.6L V-8 shows about 325 hp and 500 lb-ft of torque. The horsepower peaks at 4,000 rpm, and the torque is realized just under 2,000 rpm and starts to drop off soon afterward. The torque curve will probably be flatter with the final version of the V-8.
Miles Per Gallon
In a test of a Durango SUV with the 4.7L gasoline V-8, engineers measured a combined city/highway rating of 15.3 mpg. The diesel V-6 achieved 22.1 mpg in the same test, a 44 percent improvement. The diesel V-8 in the Ram 1500 did even better with a 49 percent improvement. It scored a combined city/highway rating of 21.7 mpg, compared to a Hemi that was rated at 14.6 mpg. In highway driving simulations, the diesel Durango made 25 mpg and the Ram 1/2-ton sipped just 24.6 mpg of diesel.
Common Rail Fueling with Piezo Injectors
Super-fast-acting piezo injectors are part of the reason the new V-engines are so efficient. By using crystals that change shape in .02 milliseconds when charged with electricity, the injectors are able to actuate much quicker than those driven by solenoids. This improves the accuracy of (up to seven) injections during the power stroke and the exhaust stroke when the particulate filter needs to be heated to clear out trapped particles. The downsides to using piezo injectors are the added cost, the need to use ultra-low sulfur diesel fuel, and slightly raised nitrogen oxide emissions.

View Photo Gallery | 19 Photos
Photo 7/19   |   Prime-Path System with Four-Way Catalyst System
Emissions
The battle against nitrogen oxides and particle emissions is the biggest hurdle for diesel engine builders who must deal with the stringent '07 federal guidelines that allow no more than 0.07 grams of nitrogen oxides per mile and 0.01 gram/mile of particulate matter-aka, soot. In addition to the requirement of ultra-low sulphur diesel, a closed crankcase filled with low-ash oil, and the fueling tricks mentioned earlier, the engines will use a particle trap, catalytic converter, and EGR system.

View Photo Gallery | 19 Photos
Photo 8/19   |   The variable geometry turbo is mounted in the center of the V. Air enters the green section, gets compressed in the turbo, goes through the intercooler, and joins with the EGR gases before flowing into the intake.
EGR (Exhaust Gas Recirculation)
The V-engines have cast pathways that cool and route exhaust fumes that are fed to the intake. The gases are used to cool the combustion process and reduce nitrogen oxides by introducing carbon monoxide and water vapor (and everything else in exhaust) back into the cylinders. Gases not recycled are sent to the turbo located in the valley of the engine V.
Variable Geometry Turbo
The turbo is a Cummins-built unit that uses an exhaust turbine that slides along an axis to vary the volume inside that half of the compressor. This technology maximizes spool-up at low rpm then opens the chamber when large amounts of exhaust are pumping out of the engine. The downpipe after the turbo includes a built-in catalytic converter that is the start of the post-engine emissions controls.
Catalytic Converter and DPF (Diesel Particulate Filter)
That catalytic converter is a passive oxidation catalyst that's packaged close to the engine to provide a quick warm-up time and allow the engines to be easily packaged in SUVs and 1/2-ton pickups. The downpipe after the catalytic converter leads to a DPF with a ceramic honeycomb four-way catalyst that captures soot until it's rendered EPA-friendly. Sensors placed before and after the DPF measure flow and alert the engine when blockages are creating significant backpressure. When this is detected, the engine electronics will calibrate injections to raise the exhaust gas temperatures (sometimes injecting fuel during the exhaust stroke), which will burn off and catalyze particles inside the insulated chamber. Cost is a big concern with DPFs, but all light-duty diesels will have them after January 1, 2007, and the DOE/Cummins tests proved the units will last for at least 150,000 miles and still be effective.

View Photo Gallery | 19 Photos
Photo 9/19   |   V-8 Cylinder Head
The Heads
The high-temperature aluminum cylinder heads include a single overhead camshaft to operate four valves per cylinder. The cams are chain-driven and use hydraulic lash adjustment. Some of the photos in the DOE/Cummins documents appear to show injectors mounted inside the valve covers that would help keep the engines quiet. All the parts of the heads are designed so they can be assembled before they are attached to the block. As mentioned earlier, the EGR system is cast into the heads to minimize the size of the engines and reduce the chances of exhaust leaks. Exhaust gases sent to the manifolds are routed through exhaust passages that are built into the heads which take gases up to the crossover manifold that leads to the turbo.

View Photo Gallery | 19 Photos
Photo 10/19   |   The block uses parent bored cylinders and a four-bolt main caps. The V-6 includes a balance shaft that is mounted in the center of the V under the injection pump.
The Block
The cast-iron blocks are designed to be strong and incorporate accessories common with current gasoline engines to reduce the costs of the diesel option in SUV and 1/2-ton applications. The alternator, water pump, oil pump, an aluminum stacked plate oil cooler, A/C compressor, and the vacuum pump are mounted either to the block, the heads, or the front engine cover. The oil filter is found near the bottom of the block at the front of the engine next to the pump and close to the oil pan.
Low-Ash Oil
Like all '07 emissions-compliant diesel engines with a DPF, the Cummins V-6 and V-8 will need to use CJ-4 low-ash oil. This prevents the DPF from becoming clogged, its more resistant to heat, and produces less sludge and soot than conventional diesel blends.
ULSD (Ultra-Low Sulphur Diesel)
Anything over 15ppm sulphur content will ruin the new Cummins V-engines. It's a fact of life for any truck using piezo injectors and a DPF, but ULSD will be your only choice at public pumps by the time trucks with these engines hit the streets. In fact, you may already be using ULSD-check the pump next time you fill up.
The Bottom Line
The 4.2L V-6 and 5.6L V-8 engines that Cummins developed in cooperation with the Department of Energy look like a home run. They are strong, yet efficient, and they are very clean. Costs and noise have been taken into consideration and are likely to be the two biggest challenges to the success of these engines in the SUV and 1/2-ton marketplace. Who knows what fuel prices will be when these engines are available (hopefully, by 2010), so the superior fuel mileage may be enough to convert the spark-pluggers.
We can't predict what people will think in a few years, but we can't wait to see diesel engines in SUVs and 1/2-ton trucks. Just like the authors of the DOE/Cummins reports, we believe: "There is a path to market for the light truck diesel."
The "Old" Inline-Six?
We're sure there are a few people out there who are wary of these new V-engines and the effect they may have on the future of the venerable and beloved Cummins inline engine. Don't worry, the ISB will be A-OK, it will just displace 6.7L instead of 5.9L, will run on only ULSD, and will come with a DPF.