Race Around The World On Biodiesel 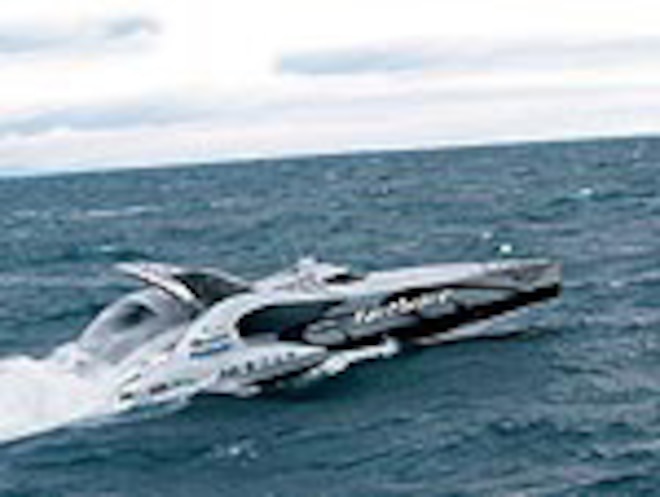 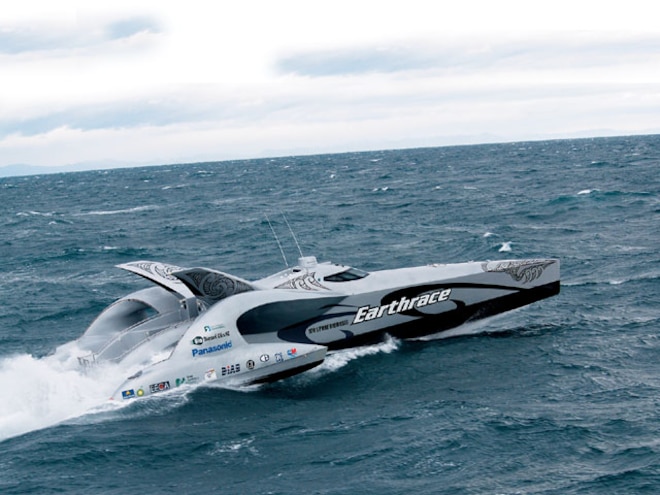 View Photo Gallery | 14 Photos
Photo 2/14   |   globe Trotter Biodiesel Trimaran right Side View
The goal is as radical as its 78-foot, wave-piercing trimaran hull: break the speed record for circling the globe in a powerboat; add one more challenge-run solely on biodiesel. That's the dream of New Zealander Peter Bethune, founder and CEO of Earthrace, an organization and boat of the same name that's dedicated to promoting the use of renewable fuels. So Earthrace is engaged in a challenge to not only break a speed record, but to also help save the planet from pollution and excessive consumption of crude oil.
Environmental issues aside, there's no denying that circumnavigating the globe represents the pinnacle of powerboat challenges. Covering some 24,000 nautical miles, it's also the world's longest race. The current record of 75 days was set by a British boat, Cable & Wireless Adventurer, in 1998. 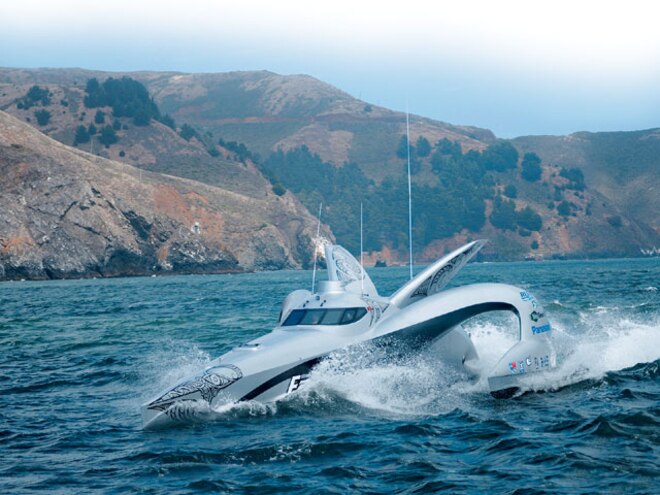 View Photo Gallery | 14 Photos
Photo 3/14   |   The wave-piercing hull is actually designed to cut through the waves instead of jumping over them.
How Bethune and his four-man crew plan to attack this record is as much a story about technology as it is the human desire to excel at something that's never been done before. The Earthrace boat aims to smash the previous record, completing the voyage in less than 65 days, which will mark the first time in history that an official Union Internationale Motonautique, or UIM Powerboat record will be attempted using renewable fuel.
In keeping with these ambitious goals, the Earthrace is one of the most unusual-looking vessels in the world. It's also one of the greenest, a showcase of environmentally friendly technologies such as low-emission engines, non-toxic anti-fouling bottom paint, and a fuel-efficient hull design. It is also happens to be one of the wildest-looking boats ever conceived.
Why such a radical shape? It's actually functional, even though it appears to be more suited for supersonic flight than ocean passages. Its wave-piercing hull form is a key element in setting the record for circumnavigating the globe, allowing the boat to run continuously at high speeds in both flat and rough sea conditions. The twin 8.3L 540hp and 1,273 lb-ft of torque Cummins Mercruiser QSC-540 straight-six turbocharged engines can propel Earthrace as fast as 45 knots (more than 50 mph).
With a fuel capacity of 2,500 gallons, the range of the Earthrace is more than 3,000 miles between fill-ups. The sources for biodiesel are as varied as the locations the boat will visit in its voyage. According to Bethune, the fuel for the boat can be made with salvaged french-fry grease, refined soybean oil, or even hard fat from livestock. Reportedly, the boat refueled in Hawaii on biodiesel made from "the drippings of cruiser liners' deep fryers."
As for the exotic hull design, a wave-piercer has a very fine bow (the pointy end) with minimal reserve buoyancy (in contrast to that large frontal volume of a freighter) in order to minimize vertical motion over ocean swells. When encountering a wave, the narrow hull spears through the water rather than riding over the top. So those fins sticking above the cabin aren't merely for show but actually have air intakes that remain above the waves, even if the rest of the boat is underwater. Indeed, Bethune says he's taken as much as 14 feet of water over the top in heavy seas.
Another important aspect of Earthrace is the use of advanced composites, namely carbon fiber and Kevlar, throughout the layup of the hull. Due to the construction material, the interior is mostly basic black. The accommodations are utilitarian, with one toilet, a few bunk beds, a small galley, and a cockpit that looks like it was lifted from a stealth fighter jet.
Getting to the engine room requires some contortions down a narrow passageway and then crawling around to get at all the filters and other mechanical equipment. This is no cruise ship, so don't ask about cocktail hour-at least not until Earthrace beats the world record.