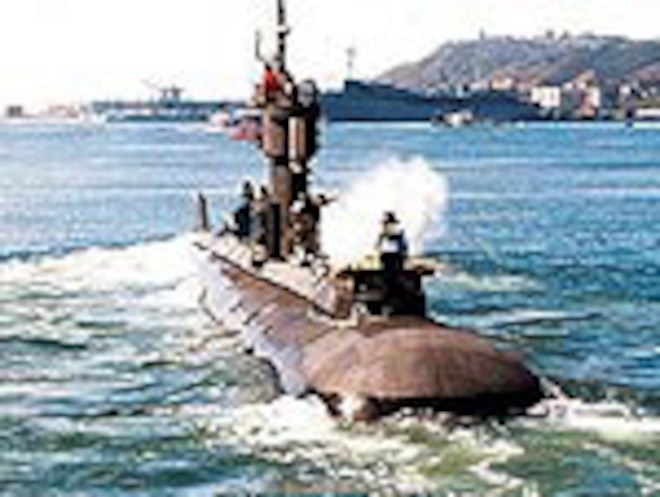 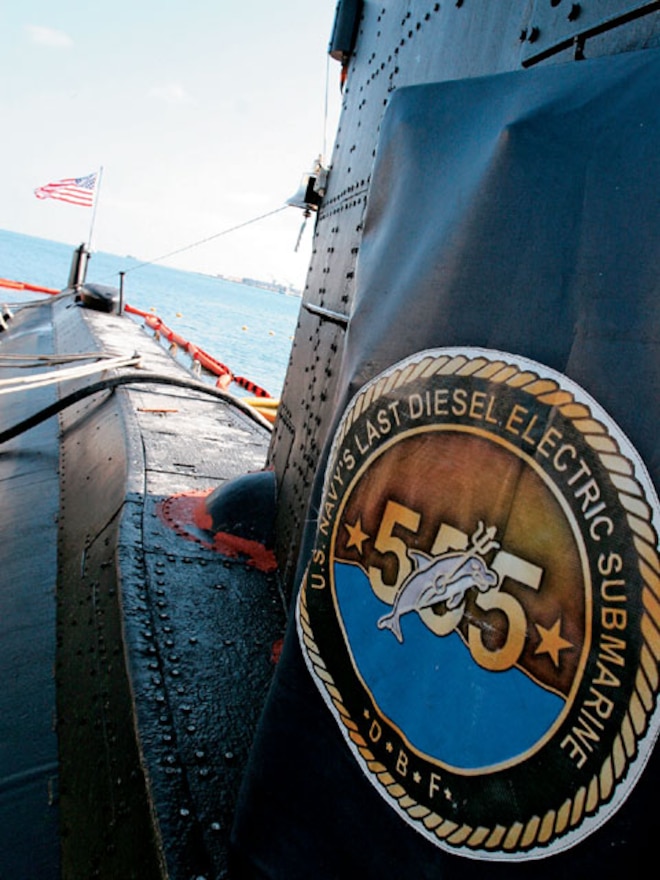 View Photo Gallery | 17 Photos
Photo 2/17   |   uss Dolphin Diesel Submarine on Deck
It's the end of an era. The USS Dolphin (AGSS-555) is the last diesel-electric submarine in the U.S. Navy fleet, and it has completed its final underway, during which it made the 1,560th and final dive to a depth of more than 3,000 feet below the surface. Before it was decommissioned, Diesel Power was honored with an invitation to tour the record-setting submarine-and when the Navy asks if you want to go aboard a submarine, there is only one right answer: Yes!
Setting Records
On August 17, 1968, the USS Dolphin (AGSS 555) was commissioned, and it began making history not long after it hit the water. Since the "pressure hull" is a constant-diameter cylinder capped with hemispherical heads (yep, it's a Hemi), it's able to withstand pressures that would crush other submarines. That's why the boat was able to dive deeper than any other submarine and set the still-standing record just months after it was launched. Less than a year later, it was fitted with external torpedo tubes and set another record when it fired one from the deepest depth ever.
Research Milestones
In addition to diving more than a half-mile below the surface of the ocean, the USS Dolphin has spent the last 37 years as a test bed for scientific experiments and technological developments. It was built to be modified inside and out so various types of equipment could be installed for evaluation at sea. The testing led to the development of things such as non-acoustic anti-submarine warfare, submarine-to-aircraft communications, and even a deep-water study of the possible "Fifth Force of Nature." See the sidebar for a list with even more of the Dolphin's accomplishments.
24 Cylinders of Diesel Power
While those achievements are incredible, we bet you are just as interested in the dual 12-cylinder diesel engines that provide power for the submarine. The two-stroke General Motors/Detroit Diesel V71-series engines are each fitted with two superchargers (one for each six cylinders) to pump the output to 425 hp for each engine. These diesels provide the twist to charge the giant 126-cell batteries used to power dual 825hp electric propulsion motors.
As an unexpected bonus during our tour of the boat, the crew (they call themselves "bubbleheads") decided to run the engines for the very last time to clear out the fuel left in the tanks and the fuel lines. The sailors made bets (for bubblehead pride, not money) about how long the engines would run until they starved for fuel. Both engines were started and brought up to about 1,600 rpm, and then we all waited. The number two engine was the first to stop, and about a half-hour later, the number one engine began to surge-and-bog when the fuel delivery became erratic. To find out what happened next, you can watch video clips on our Web site: www.dieselpowermag.com.
The USS Dolphin Family
The USS Dolphin may be small when compared to the giant nuclear subs that populate the U.S. Navy fleet, but it has something the others just don't: a small, tight-nit family. When we visited, there was a crew of just 51 people assigned to the boat. While having such a small staff sometimes resulted in the sub being treated like the black sheep of the fleet, it also created an exclusive club, the USS Dolphin family.
Every sailor serving on the Dolphin had to achieve a higher level of qualification, and everyone was challenged to qualify in areas outside their ratings and tested with demanding at-sea watch routines. This is a great source of pride and created family bonds so strong that retired Chief Warrant Officer Bill Sutter's wife, Patricia, requested that her ashes be dispersed from the sub at sea. That happened 30 years ago, but she also requested her most prized necklace and bracelet be returned to her resting place at sea during the sub's final underway mission before the decommissioning. The Dolphin's crew fulfilled this request during the sub's final trip out to sea that ended on September 9, 2006.
A pair of General Motors/Detroit Diesel 12V71 engines provide the twist needed to charge the giant batteries in the USS Dolphin. Each of the 425hp two-stroke V-12 engines has two Roots-style, twin-screw superchargers (one per six cylinders), and use sea water to exchange heat with the radiators. The intakes suck in air from the surface and use throttles to control engine loads and speeds. The exhaust is highly insulated and was cool to the touch even after the engines were running for nearly an hour. The red warning plate on the valve covers warn "Do not remove engine crankcase covers or any access covers until at least 30 minutes have elapsed after shutdown when it is known or suspected that there has been a crankcase explosion, fire or an overheated part in the crankcase."
The End?
So why is this unique and historical submarine being put to rest? The short answer is that Navy bean-counters decided the $18 million per year cost of operation was too much for the budget. This came as a surprise to most people (including the crew) because the submarine had just received $50 million worth of repairs and upgrades before completing sea trials during the summer of 2005. The USS Dolphin was decommissioned on September 22, 2006, and is awaiting disposal.

View Photo Gallery | 17 Photos
Photo 11/17   |   Air supply lines are mounted throughout the sub and are designed to be found in the dark during an emergency. Grip tape on the floor alerts bubbleheads when an air nozzle is overhead, and each station has glow sticks and glow-in-the-dark tape. Each member of the crew is tested on their ability to suit up and move from the front of the ship to the rear using only the emergency air.
We can only hope it will be saved from this fate and be turned into a museum to honor decades of work and achievements that have benefited the greatest Navy on the planet. If anyone at the Smithsonian is reading this, Please get a hold of the USS Dolphin. Cutting it down the middle and letting folks explore every nook and cranny is an experience they would cherish for years. We will never forget our time on the Dolphin, and we want our children (and their children) to get a chance to experience this incredible piece of military technology.
History
Ordered: August 10, 1960
Laid down: November 9, 1962
Launched: June 8, 1968
Commissioned: August 17, 1968
Decommissioned: September 22, 2006
Struck: December 8, 2006 (scheduled)
Fate: Decommissioned, awaiting disposal
Specifications
Displacement: 805 tons light, 861 tons full, 56 tons dead
Length: 152 feet overall
Beam: 20 feet
Draft: 16 feet
Propulsion: Two 425hp GM/Detroit Diesel V71 two-stroke, supercharged diesel 12-cylinder engines; two 126-cell main storage batteries; two 825hp electric propulsion motors
Speed: 10 knots (11.5 mph) surfaced, 7.5 knots (8.6 mph) submerged (10 knot sprint, 3-4 knots sustained)
Depth: 1,500 feet operating, 3,000-plus feet during testing
Endurance: 15 days
Armaments: .45-caliber pistol, M14 rifle and shotgun for port defense, one countermeasure cannon (external mounted torpedo tubes were used for deepest test firing of a torpedo)
Payload: 12 tons on external mounting padsCrew: 51
USS Dolphin Achievements
* World's deepest diving submarine
* Launched torpedo from the deepest depth that one has ever been fired
* Development of a highly accurate target management system
* Evaluation of a possible "Fifth Force of Nature"
* First successful submarine-to-aircraft optical communications
* First successful submarine-to-aircraft two-way laser communication
* First submarine launch of a mobile submarine simulator (MOSS) decoy system
* Development of an Extreme Low Frequency (ELF) antenna for Ohio-class submarines
* Evaluation of various non-acoustic anti-submarine warfare (ASW) techniques
* Evaluation of various low probability of interception active sonar systems
* First successful submarine test of BQS-15 sonar system
* Development of highly accurate (4-inch) towed body position monitoring system
* Development of a new Obstacle Avoidance Sonar system
* Development of a Laser Imaging system of photographic clarity
* Tested a new sonar system that will be fitted into the submarine fleet
Videos from the USS Dolphin
Go to www.dieselpowermag.com for more exclusive photos and to watch video clips, including the final run of the diesel engines and more.
Thank You!
Special thanks to Commanding Officer Andrew C. Wilde for inviting us aboard his ship, Executive Officer LCDR John Vlattas, Duty Officer LTJG/SS Rabin, MMC/SS Scott O'Hara for giving us a four-hour tour (a four-hour tour), all the past and present crew of the USS Dolphin, and Lt. Alli Myrick for all her work organizing our amazing trip.