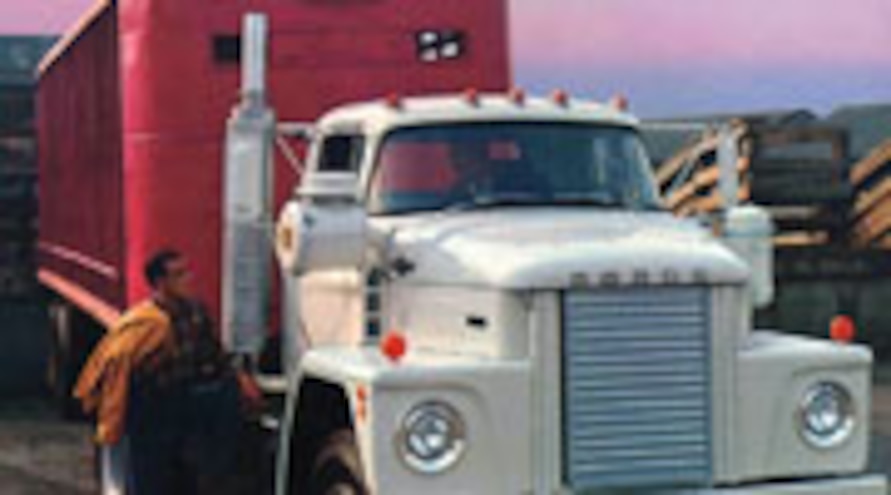 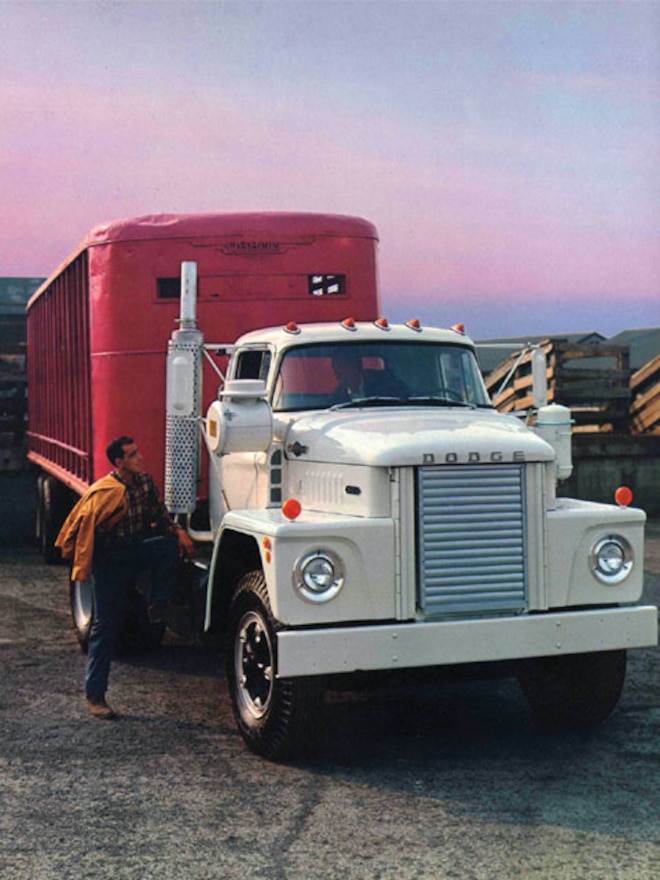 View Photo Gallery | 5 Photos
Photo 2/5   |   1916 To 1975 Dodge Diesel Engines front View
In the early years of Detroit's fledgling automotive industry, commercial vehicle platforms were custom-made affairs and utilized production automotive components. All the initial branded trucks were based on passenger-car chassis. Later, these platforms were modified to safely withstand 1,000-pound payloads.
The First Dodge Truck
The Dodge Bros. brand followed the trend of utilizing automotive sourced components. What was different, however, was its respected inline-four-cylinder engine. When Walter P. Chrysler purchased Dodge in 1928, this mill continued on in its commercial vehicles as well as those produced by the Graham Bros. from 1921-1928. The 1/2-ton trucks were the market mainstay at the time, but models were produced in versions up to the 3-ton range. The famous four-cylinder engine remained the powerplant in all these platforms until the Dodge inline-six was introduced.
Dodge's Big Break
July 15, 1916, was a subtle company milestone for Dodge. That was the day Gen. John J. "Blackjack" Pershing submitted an order for 150 Dodge five-passenger touring cars for the U.S. Army. His intent was to use these motorized platforms in combat conditions. In Pershing's view, horses and mules had been acceptable for the last three major U.S. wars, but in the new century, his Cavalry forces had to move quicker, with more range and more personnel.
The Dodge brand was first tested against the renegade Mexican forces raiding the U.S. border. The Dodge platforms could carry five people instead of one, so it didn't take long for American commanders to seize the advantage.
Gen. Pershing and his aide, Lt. George S. Patton, quickly revolutionized mechanized history. Patton had used three Dodge touring cars to engage in a running gun battle with the horse-mounted forces of Poncho Villa. Patton's small force engaged in the first mechanized charge in military history, winning both the battle and an immediate promotion to first lieutenant.
Military Spec
When World War I was declared on April 6, 1917, the Dodge Bros. were in an exceptional position with the U.S. Army. Now a major government supplier, Dodge produced light-commercial platforms, which were used as ambulances and light-duty trucks. These trucks became the famous Dodge 1/2-ton civilian Screenside Business Cars when the war ended.
By 1920, consumer demand for the Dodge Bros. brand (16,198 commercial vehicles sold) outstripped the company's facilities. A year later, Dodge and Graham signed an exclusive agreement allowing Graham to supply Dodge with 1 1/2-ton platforms. By 1927, all Dodge's truck output went with the Graham label.
Chrysler Buys Dodge
One year later, in a highly lauded move, Walter P. Chrysler purchased all the assets of the Dodge Bros. The new purchase provided Chrysler with the assets and the ability to enter the rapidly profitable truck market. In addition, roughly 8,000 dealers were added to Chrysler's fold. Not unnoticed was the famous Dodge quality, which generated a 19 percent sales gain in the next 12-month period.
The '30s were a period of growth and rapid change. Dodge introduced a larger, L-head, eight-cylinder engine displacing 366 ci (6.0L) for 1932. This new engine utilized a 12-volt electrical system. In 1933, an all-new Dodge truck debuted. The line was now a Chrysler exclusive, with all the Graham-branded carryovers discontinued. 1934 saw another whopping sales increase of 75 percent. This year was also noted for the new 1 1/2-ton cargo/personnel 4x4, developed again for the U.S. Army. This unit was unique because it marked the first time an operator could shift from two-wheel drive to four-wheel drive with a cab-mounted interior lever. Dodge instantly became the preferred builder of light-duty, four-wheel-drive trucks for the military. 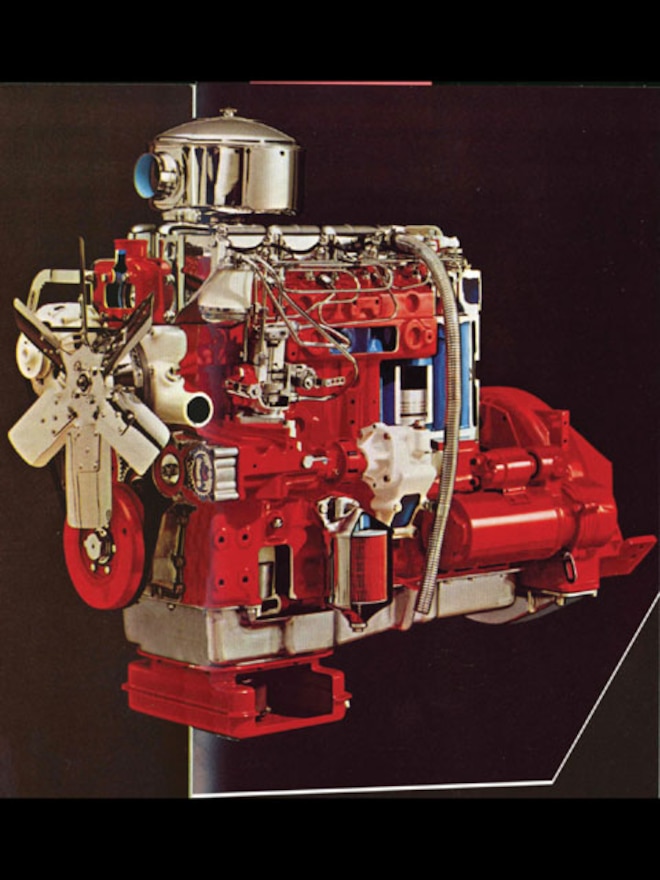 View Photo Gallery | 5 Photos
Photo 3/5   |   In 1963, Dodge offered this 354ci, six-cylinder, Perkins diesel rated at 131 hp and 284 lb-ft of torque in its medium-duty trucks up to 36,000 pounds.
Dodge's Diesel Debuts
In 1939, Chrysler celebrated its 10th anniversary of purchasing Dodge by building a 658,000-square-foot truck assembly plant in Warren, Michigan. Its output included 28 different truck models and offered a complete range of choices for light- to heavy-duty truck platforms for the first time. The real news was the corporation's introduction of an in-house-designed and branded Dodge diesel engine.
The totally new Dodge diesel was an inline-six-cylinder, four-cycle engine that produced 96 hp at 2,600 rpm and 225 lb-ft of torque at 1,000 rpm. The new mill displaced 331 ci and featured a compression ratio of 14.5:1. Its block incorporated nickel-moly alloy and featured full-length water jackets, valve-seat inserts, overhead valves, and a chaindriven camshaft. A 24-volt electrical system was also included.
A coast-to-coast demonstration of the new engine was conducted with a run from New York to Los Angeles to San Francisco and back. The event took 187 hours and consumed 627.7 gallons of fuel. The 6,378-mile run showed off the diesel's superior fuel savings, which accounted for an operating cost of less than one penny per mile.
In 1940, the company produced its first cabover series truck and began production of the DeSoto, Plymouth, and Fargo truck nameplates (the DeSoto and Fargo platforms were exported). 1940 also saw the introduction of Dodge's "Job-Rated" advertising slogan for the first time.
World War II
The war in Europe was building, and Dodge answered with its heavy-duty, 3-ton, two-wheel-drive VK62B. The company also sold civilian 1 1/2-tons, and these units were equipped with four-wheel drive. The first Command Reconnaissance, or Command Cars for short, were developed off civilian truck platforms as well, utilizing standard front sheetmetal. Sales of diesel engines almost doubled to 134 from the 75 sold in 1939. An additional 6-volt auxiliary generator debuted in 1941 on the diesel engines. The unit furnished power for lighting, instruments, and horns. Sealed beam headlights were also added. Diesel sales increased to 195 units in 1941.
By February 1942, all civilian automotive production had halted. The government did allow production of small numbers of medium- and heavy-duty truck platforms that were important to the home front. Less than 11 percent of Dodge's truck output went to civilians. In any case, the company's first in-house diesel effort dried up.
Diesels Return
In 1960, diesel popularity had risen to the point where one in four heavy-duty truck platforms sold was diesel-powered. Dodge announced a unique series of cab designs for the new big-truck era on October 4, 1959. The division's Servi-Swing front fenders, combined with a 90-degree hood-access feature, allowed for easy service. Cummins was the diesel-engine provider for these new trucks, and Dodge offered four inline-six-cylinder engines with ratings from 175 hp and 405 lb-ft of torque to 220 hp and 605 lb-ft of torque. Two transmissions were also available: a five-speed, all-synchro Spicer 6452-A and a 10-speed Fuller R96 Road Ranger. Chrysler established a separate assembly area for these heavy-duty platforms. The new facility had the capacity to produce five trucks per hour.

View Photo Gallery | 5 Photos
Photo 4/5   |   Dodge was using Cummins engines long before the 5.9L B-Series engine showed up in the '89 pickup. This '60s vintage NH-220 Cummins displaced 743 ci (12.2L) and cranked out 220 hp and 605 lb-ft of torque. Keep in mind, these engines were naturally aspirated, which helps explains why the current 6.7L Cummins puts out more power and it's only half the size.
Heavy-duty truck platforms had a 35 percent increase in sales in 1962. In the middle of that year, management decided to forgo the annual model change to allow continuous engineering improvement. In addition, to enter the short-haul delivery field, Dodge introduced a smaller Perkins diesel for the medium-duty truck line. Eight diesel mills were offered in 1962-six Cummins and two Perkins. Heavy-duty Spicer 6452-A five-speeds were standard, with a second Spicer five-speed, a Fuller 10-speed, and a Fuller 12-speed unit as options.
Dodge felt it needed a new heavy-duty cabover tractor for the interstate to cover the high end of its big truck line. The LNT series, introduced in 1964, featured diesel power along with single or tandem axles, three cab designations, and interior and exterior trim levels. A short BBC cab, a BBC sleeper, and an extended 79-inch BBC sleeper were offered. The CN and CNT conventionals were discontinued.
Three new Cummins diesels were offered for the L-series tilt cab trucks for 1965. The standard 785ci (12.9L) VBE-235 V-8 engine produced 235 hp and 568 lb-ft of torque. An optional 785 developed 265 hp and 600 lb-ft of torque. There was also a 195hp, 450-lb-ft, 588ci (9.6L), V6E-196, V-6 engine. This smaller unit was used in the 65,000-70,000 gross combined weight rating trucks. Just like in 1964, all Dodge tilt cabs were supplied with easy service access hoods and quick disconnects.
Big-Rig Business Was Booming
The year 1966 saw the launch of Chrysler's Warren Assembly Plant #2. This new 100,000-square-foot facility was used for LCF and LN 1000 diesel heavy-duty trucks. Twelve trucks per shift were capable of being produced. Additionally, Caterpillar and Detroit Diesel powerplants were added to the Cummins brand for a broader power range. Dodge diesel truck sales increased by 43 percent.
Dodge continued to push its heavy-duty line in 1969. The L-series tilt cabs continued to offer six- and eight-cylinder diesel mills. The Cummins turbocharged six-cylinder NTC-280 and 335 engines were offered as options. Then Detroit Diesel added its 8V-71N in two horsepower ratings: 260 and 318. Dodge's CNT conventionals offered the largest Cummins engine, the 335hp NTC-335.
The Enthusiast Big Rig is Born
Luxury custom interior packages were offered in 1970 on the LN-series. Two-tone paint combined with matching interior colors set the theme along with custom seat trim, padded doors and headliners, carpet, and chrome trim. In 1973, Dodge added the 950 long-nose conventional. Designed from the wheels up, the new series could be outfitted with diesel mills approaching 500 hp. Dubbed the Bighorn, a mere 261 trucks were produced from 1973 to 1975. Standard and custom-trim packages were offered.

View Photo Gallery | 5 Photos
Photo 5/5   |   A '64 Dodge 500 diesel-powered dump truck on the work site.
The Energy Crisis Takes Its Toll
The fuel crisis hit in 1974, and the automotive market dropped 27 percent, though truck sales at Chrysler improved by 1 percent. Dodge ended its LCF-series by cutting the C600 and C1000 along with the CT900. The CNT900 heavy-duty became its largest LCF, and the LT-series remained.
The energy crisis was in full swing by 1975. Combined with new government fuel economy and safety standards, inflation coined the term "sticker shock." In the heavy-truck market, production dropped by 43 percent. The new government safety standards for heavy-duty platforms combined with Chrysler's increased demand for light-duty trucks meant the end of the line for the medium-duty trucks as well. Sadly, these events marked the end of Chrysler's heavy-duty line.