From Legendary Two-Strokes To The World's First Modern Diesel 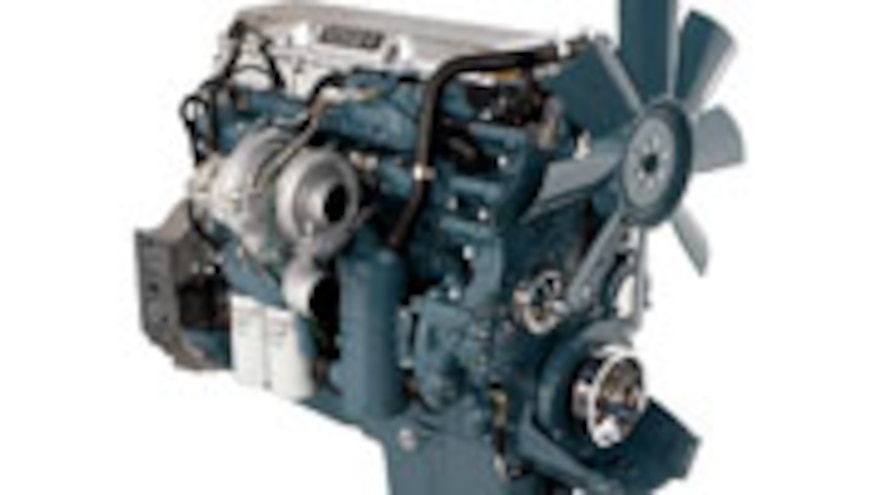 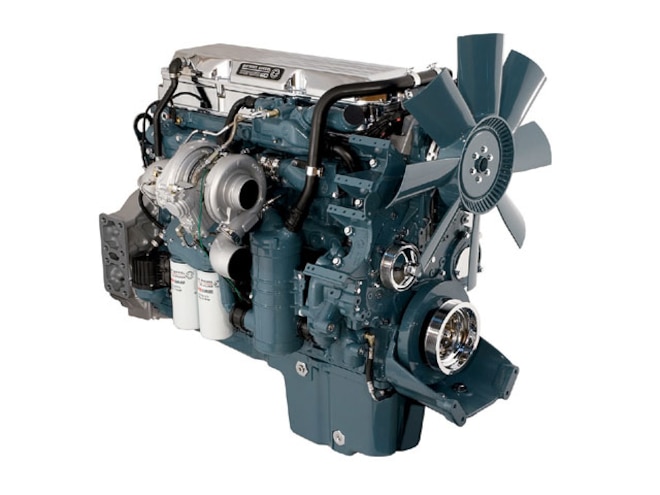 View Photo Gallery | 5 Photos
Photo 2/5   |   detroit Diesel Series 60 Engine engine Front View
General Motors went on to pioneer the development of practical, high-output and lightweight, two- and four-cycle diesel powerplants, but it was Alexander Winton (famous for losing an auto race to Henry Ford in 1901) who began the diesel industry in North America.
Charles F. Kettering, GM's head of engineering from 1920 to 1947, always had an interest in the novel diesel powerplant. The fact that he was also a member of the Detroit yachting community led him to investigate the Winton diesel marine engine design. After purchasing and installing a Winton diesel mill for his own pleasure, Kettering demonstrated the engine's capabilities to his boss at GM, Alfred P. Sloan who was Chairman of the Board. Sloan, always looking to the future, purchased the Winton Co.
Alexander Winton and his organization had made great strides in the American two-stroke diesel field, and he knew that GM had the engineering know-how and a massive financial base to realize the untapped potential of his unique power source. Timing is everything, and the stock market crash of 1929 slowed the negotiations and the final purchase. Winton's moderately sized, Cleveland-based company was made into a GM division by 1930.
Another major client of Winton's, Electro-Motive Engineering, had been working on his development of a two-stroke diesel mill for railroad locomotives, and in a unique turn of events, the General took another risk and purchased both organizations during what analysts would define as uncertain market conditions.
General Motors immediately began a marketing blitz demonstrating the economical and powerful benefits of utilizing these ultramodern mills. The famous diesel-powered Zephyr passenger streamliners and the '33 World's Fair GM exhibit demonstrated the radical mill's functionality. At the fair, Winton diesels powered a GM automotive assembly-line recreation exhibit. The public was enthralled, but some insiders felt a lot of engineering was needed to make these functional machines profitable. Critics aside, the Zephyr streamliner proved that a diesel engine had the ability to cut the running time to West Coast cities by more than 20 hours. Though other firms continued to experiment, GM was the only major player fully engaged in diesel production until after World War II. In short, GM had the market cornered. As a result, the success of its locomotive business allowed Sloan and Kettering to fully establish Detroit Diesel in 1937. 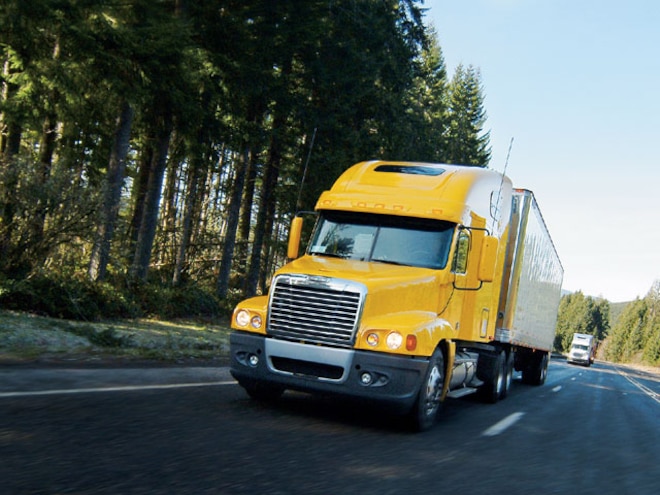 View Photo Gallery | 5 Photos
Photo 3/5   |   yellow Truck front View
Detroit Diesel rapidly began to research, develop, and market its diesel mills in three distinct areas: marine, industrial, and railroad use. With a measured decline in the railroad market after World War II, Detroit Diesel's position remained strong. Division engineers had set in motion future mills for the new truck, marine, and industrial businesses. Obviously, competitors had entered this field, most notably Cummins. During the '60s, the trucking industry seemed to be a black hole for diesels to fill.
The General felt fine-tuning was necessary and combined Detroit Diesel and Allison operations in 1970. Allison was jointly acquired at the same time as Winton Engine and was considered a twin in 1929. It had specialized in the development of aircraft powerplants, delivering 70,000-plus units during World War II. GM decided the future for both of these specialized entities was the marketing and sale of products as power providers for automotive platforms.
1980 found the Detroit Diesel Allison division trailing Cummins in the market it had created. Though Detroit Diesel hung on to a 30 percent market share, its sales continued to drop, and by 1987, its share had dwindled to less than 5 percent.
Obviously, the rapid acceptance of imported diesel engine brands was a factor. In addition, Cummins continued to gain market share. Quality-control issues at Detroit Diesel sent the brand into a negative tailspin. The end user suffered, and suddenly, major customers were lost. Observers felt the General shared a majority of the blame by ignoring the division with cost cutting and lack of modernization. During this timeframe, the General spent $50 billion on facility upgrades and modernization programs. Detroit Diesel received a paltry $100 million. Buyers for the diesel engine group were sought in 1987.

View Photo Gallery | 5 Photos
Photo 4/5   |   penske Factory inside Factory Working
The Penske Era
Roger Penske, the noted auto business investor, became interested after being approached by the struggling unit. In 1988, he added Detroit Diesel to his expanding portfolio by purchasing 60 percent of the outstanding stock. As part of the deal, GM retained 40 percent interest in the company.
Penske immediately changed Detroit's corporate goals, consolidating manufacturing operations while retaining key decision-makers. His goal was to cut Detroit's operating budget by at least $70 million.
Penske's first two years of ownership demonstrated that his new independent management had more than doubled the company's market share. In 1993, Penske management had improved Detroit Diesel's share by 26 percent and saw revenue increase by 60 percent. All was not rosy, however, as research costs reduced these profits to a paltry 1 percent. Further, the next two selling years were considered write-offs. 1992 was better, with income increasing by $20 million. Two major contributors added to the success of these Penske years: the company's Series 60 diesel engine and joint ventures.
The Series 60 Engine
Detroit's electronically controlled Series 60 diesel engine was introduced during the first quarter of 1987. What was unique about this mill was that it was the brand's first ever clean-sheet design. This meant Detroit had applied the latest technology in every aspect of the series' design, engineering, component production, manufacturing, and unit testing. Aside from the increased fuel economy, the new mills featured computerized engine control and monitoring features. In addition, longevity played an important part, with the new series recommending initial overhaul at 500,000 miles, with 500,000-mile rebuilds following. Upon the success and acceptance of the new engine, Detroit immediately extended the recommendation to 750,000-mile periods. The market responded to the new series, providing sales of $82 million by 1993.

View Photo Gallery | 5 Photos
Photo 5/5   |   penske Factory parts
Joint Ventures
Joint ventures seemed to be the latest corporate strategy for Detroit Diesel in the early '90s. The new business plan was to decrease competition for dwindling market share in the American homeland and increase foreign sales. Forging new agreements and understanding with foreign manufacturers, it was thought, would open global markets. The government, with its recent North American Free Trade Agreement (NAFTA) and General Agreement on Tariffs and Trade (GATT), would sweeten the development of long-term growth to offset traditional North American automotive business cycles.
To get the ball rolling, Detroit had previously entered into an agreement in 1988 with Perkins Engine in the UK for access to smaller diesel engines to broaden the company's lower-end choices in the 5-2,500hp range. Broader distribution of Detroit's own line was also planned. On Detroit's product side, it entered into an agreement with Mercedes-Benz in 1991 to jointly develop electronic fuel-delivery systems. A short 24 months later, both companies signed the Diesel Project Development funding agreement, which allowed MB to invest $20 million for an 11 percent stake in Detroit. The same year found agreements with Volvo's Penta engine division for select marine products sold within specific global markets. RABA PLC from Hungary then formed an alliance with Detroit to open the former eastern bloc countries to its diesel products.
Emissions: Round One
In the late '90s, the industry faced increased emissions standards. Though Detroit Diesel had scooped the competition with its high-tech Series 60 engine, the company faced tougher standards again in 1997. Detroit had hoped its increased research-and-development budgets would continue to give it an edge in both fuel efficiency and emissions controls. By this time, its fuel-research group had started utilizing alcohol, ethanol, methanol, and natural-gas engines. Despite all efforts including the increased income, the research, and the broader markets, Detroit Diesel continued to maintain an excessive debt load. The company countered by offering and completing a public offering of five million shares of common stock in the fall of 1993. Detroit's debt load was reduced by a cool $99 million as a result. However, the continued emissions issue combined with multiple joint ventures and increased research costs initially continued to position the company for an uncertain future.
In 2000, DaimlerChrysler AG purchased Detroit Diesel, merging it into its MTU Friedrichshafen and Mercedes-Benz Industrial engine businesses. The resulting Daimler-Chrysler Powersystems division brought together more than 34,000 employees and combined revenues of approximately $7 billion. Detroit Diesel now supplies its on-road engines to the company's Freightliner subsidiary on an exclusive basis.