The Best Midsize SUV You Can Buy 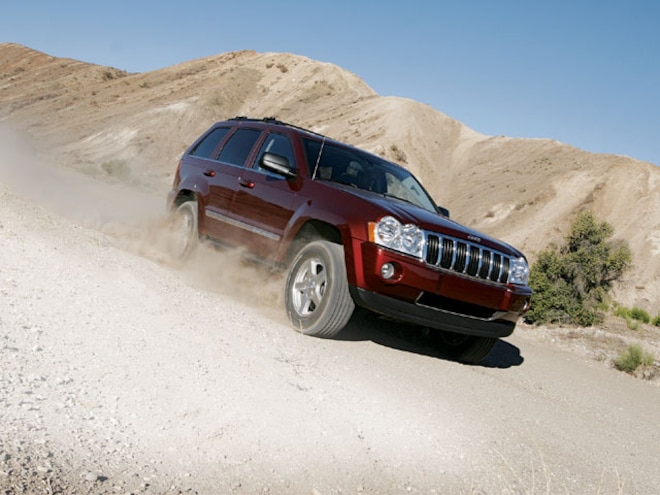 View Photo Gallery | 22 Photos
Photo 2/22   |   2007 Jeep Grand Cherokee 3.0l Crd right Side
The Ford Explorer may get the credit for being the first popular midsize SUV, but the Grand Cherokee has proved to be the real 4x4 king of that class since its debut in 1993. While the Explorer has become a bloated, independent-rear-suspension, kid-hauling parody of itself, this Jeep is still a real 4x4. Sure, it may have lost some hard-core fans when the front axle softened with the '05 redesign, but the capability of the Quadra-Drive II system, the comfortable ride, and the superb new diesel drivetrain make this one of the best 4x4 trucks to drive on- or off-road. 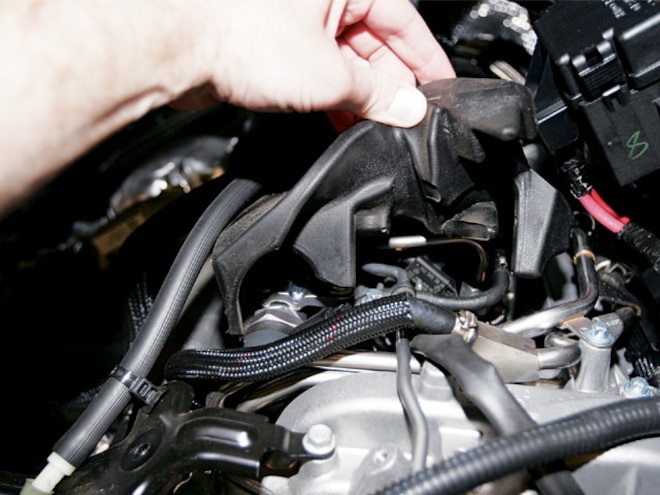 View Photo Gallery | 22 Photos
Photo 3/22   |   Ever heard of a valve-cover cover? Dense rubber (similar to the material used to make those stress-relieving squeeze balls) is molded to fit around the common rails, fuel lines, and injectors to muffle noise created by fuel injections and the DOHC valvetrain.
The 3.0L CRD V-6 EngineA 3.0L V-6 is being used to power a 4,750-pound SUV? That may sound crazy, but this Mercedes-Benz diesel mill can easily put out 198 hp and 371 lb-ft of torque to all four wheels. The engine is all aluminum alloy-except for cast-in, gray, iron cylinder liners-and uses the latest high-pressure, common-rail fueling system by Bosch along with fast piezo-actuated injectors. Up to 24,000 psi of fuel pressure is combined with the intercooled output of a variable-geometry Garrett GT2056V turbo that kicks in hard at just below 2,000 rpm. A 3-inch downpipe sends exhaust through an oxidation catalyst, a NOX-reducing catalyst, and a diesel particulate filter (just like in the new fullsize trucks), allowing it to be sold in 45 states.
W5J400 Five-Speed AutomaticPower from the turbodiesel is handled by the W5J400 five-speed automatic with manual shift mode that's built in Germany. It's not easy handling more than 370 lb-ft of torque, but this automatic does it in style, shifting smoothly during light-duty driving, and banging the gears when you mash the throttle pedal. Flicking the shift knob to the right or left engages manual shifting, with the gear selection displayed inside the tachometer dial. There's no point in trying to outshift the transmission during hard acceleration (you're bound to shift too early or hit the rev limiter), but the manual mode is terrific for driving on steep mountain roads. Downshifts provide superb gear braking (it feels like the turbo is also helping), and by keeping the engine around 2,000 rpm, you can guarantee instant, neck-snapping acceleration at any speed. 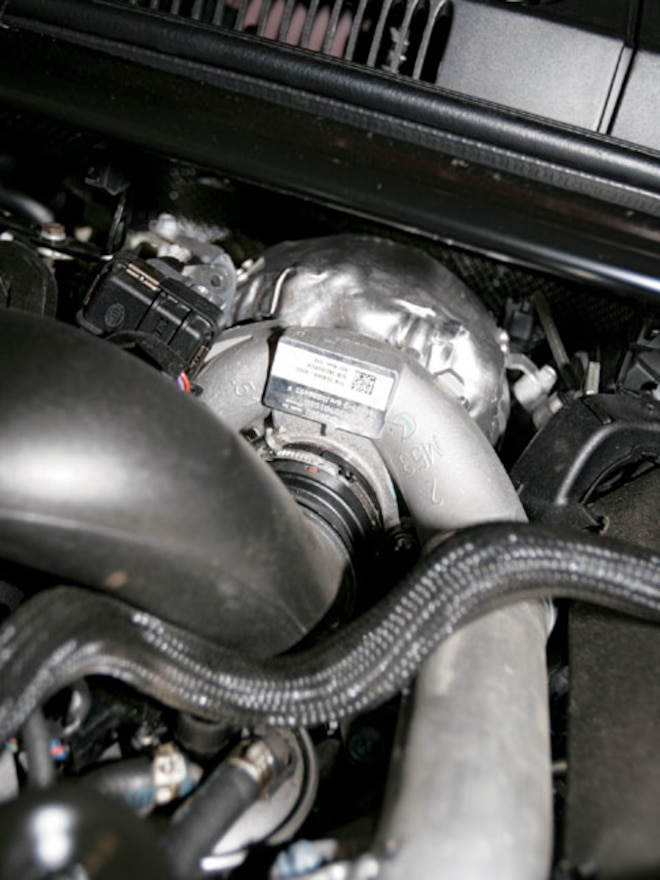 View Photo Gallery | 22 Photos
Photo 4/22   |   A variable-geometry Garrett GT2056V turbo suffers from some lag when the engine is spinning at less than 1,800 rpm. Wait until the 3.0L is turning 2,000 rpm, then floor it, and the boost hits like an NFL linebacker from the time it kicks in all the way up to the 4,500-rpm redline.
Performance TestsBuilding boost up to that magical rpm while holding the brakes provided our best quarter-mile times during testing at Los Angeles County Raceway. The front tires squealed as they broke traction before the differentials locked up and put all the power to the ground for a fastest elapsed time of 16.182 seconds at more than 81 mph (15.939 seconds at 82 mph-altitude corrected). The all-wheel-drive experts at Yimi Sport Tuning confirmed that 198 hp and 371 lb-ft of torque is consistently sent to all four wheels. Noise testing revealed the Grand Cherokee is a bit louder than the newest fullsize diesel trucks, but fans of the Jeep Liberty diesel will notice this engine is much quieter than its 2.8L Italian cousin. Fuel-economy tests showed this engine with less than 4,000 miles of use was capable of nearly 18 mpg in combined driving conditions, including dragstrip racing and Low range off-roading.
Off-Road Diesel PowerThe Jeep felt at home when the all-terrain tires hit the dirt, but this luxury rig was definitely not built for jumping. Low-hanging bumpers are easy to snag on obstacles and greatly reduce the approach and departure angles, so rockcrawling is out of the question. That's OK because a stock Grand Cherokee is built for getting to your campsite, not for blazing trails into uncharted territories. The Quadra-Drive II system is standard with 4WD diesel models and can send power to all four wheels at any speed. A simple grab of the 4WD Low lever next to the shifter provides quick and easy access to the 2.72:1 Low range gearing, which works perfectly with the low-rpm torque of the 3.0L CRD engine.

View Photo Gallery | 22 Photos
Photo 8/22   |   A CP3 injection pump like those found on the fullsize '03-and-later Cummins and Duramax common-rail diesel engines is used to pump 24,000 psi of fuel into the superfast piezo-actuated injectors.
Is It Worth $42,730?While you can purchase a fullsize 31/44-ton truck for about the same price as the base two-wheel-drive diesel Grand Cherokee (MSRP $38,925), that pickup would be a regular cab work truck with vinyl floors and manual window cranks. Every diesel Grand Cherokee comes loaded with a long list of standard features such as leather seats, power windows, climate control, standard side airbags, antilock brakes, traction control, electronic stability programming, and emergency braking assistance. Put that impressive partial list of features in a package that can actually fit in your garage, and you have the new '07 Grand Cherokee 3.0L CRD diesel-the best midsize SUV you can buy today (in 45 states, that is).
Specifications'07 Jeep Grand Cherokee (WK) 3.0L CRD 4x4Construction: Steel unibodyAssembly plants: Detroit, Michigan, and Graz, AustriaBase diesel MSRP: $38,925 (Overland 2WD)As tested MSRP: $42,730 (Limited 4WD)

View Photo Gallery | 22 Photos
Photo 12/22   |   Believe it or not, the Grand Cherokee has no frame. The steel unibody uses these framelike sections (seen here in a Jeep display) to connect and reinforce the suspension setups. The strong steel body connects the front and rear and is bolstered with steel channels and folded sections that add rigidity to the unibody chassis.
SuspensionFront: Short/long independent (SLA) upper and lowerA-arms with coilover shock absorbers, and stabilizer barRear: Live axle, coil springs with track bars, shock absorbers, and stabilizer bar
BrakesFront: Size and type: 12.9 x 1.2-inch vented discsRear: Size and type: 12.6 x 0.55-inch discs
WheelsSize: 17 x 7.5-inch
TiresSize: P245/65R17Manufacturer: Goodyear Fortera All-Season
Towing Capacity2WD: 7,400 pounds4WD: 7,200 pounds
Driving ImpressionsTo get some opinions on how the diesel Grand Cherokee performs in the real world of grocery grabbing and trail riding, we put a Jeep fanatic and a daddy behind the wheel of the 3.0L CRD. Here's what they had to say:Mr. Jeep*The low-end torque is unbelievable. It launches hard from a dead stop. I love it. The diesel
Grand may make a nice tow rig because it's rated to pull up to 7,400 pounds.

View Photo Gallery | 22 Photos
Photo 13/22   |   The '08 model year will include some small changes to the Grand Cherokee exterior. The indentation in the middle of the front bumper will disappear to make more room behind the plastic for cooling equipment. The foglamps will also change. They're being moved lower and mounted in a separate part of the fascia that can be totally removed for better off-road clearance. The headlamps will also be updated with available auto-leveling, high-intensity discharge (HID) bulbs.
*Easily shifted transfer case. Put the tranny in Neutral, lift the lever for Low range, and go. Just as easy to shift out of Low. No annoying clicking, buzzing, beeping, or fussy shifting like some other electronically shifted T-cases.
*Low range combined with diesel power feels like crawler gearing. Lots of slow control.
*Quadra-Drive II is like having lockers front and rear. The only thing stopping you is ground clearance. I love that system.
*The electronic stability program (ESP) is way rad. Fun to chase down sports cars on wet, slippery surfaces. They won't shake you unless they're in a Formula 1 car. Not to mention, it's safer.
*Vibration feel in the throttle pedal. I noticed it in a lifted diesel Grand, too. Kind of annoying.
*Verdict: The 3.0L diesel is the engine option to have, it's fun to drive, and I guess the novelty of having something different appeals to me. Plus, in 2009, the emissions will become 50-state legal (Bluetec models).-John CappaEditor of Jp Magazine
Performance TestsAll-Wheel-Drive DynoPower: 198 hp at 2,800 rpmTorque: 371 lb-ft at 2,500 rpm

View Photo Gallery | 22 Photos
Photo 14/22   |   The Jeep Grand Cherokee we tested was equipped with the full-time Quadra-Drive II four-wheel-drive system. To get all-wheel-drive dyno numbers, we enlisted the help of the Subaru/Mitubishi masters at Yimi Sport Tuning. Everyone was shocked when the Jeep produced 198 hp and 371 lb-ft of torque at the wheels (manufacturer ratings are 215 hp and 376 lb-ft of torque at the crankshaft).
Dragstrip*Los Angeles County Raceway is at an elevation of 2,710 feet above sea level, so these dragstrip times can be corrected for altitude by multiplying e.t.'s by 0.970 and multiplying the mph by 1.023 to reveal how fast this Jeep would theoretically run at sea level.
Noise TestingInterior at idle: 74 dB45-mph cruise: 85 dBWide-open throttle: 91 dB75-mph cruise: 90 dB
Fuel EconomyAlthough we never reached the 24-mpg highway rating found on the window sticker (or even the 20-mpg city rating) during our tests, the Grand Cherokee 3.0L CRD never dipped below 17 mpg-quite good for a powerful midsize SUV, especially when compared with the EPA ratings of the non-SRT gasoline V-8 options (15 mpg combined city/highway) or the seriously underpowered gasser V-6 (17 mpg city/highway).

View Photo Gallery | 22 Photos
Photo 16/22   |   2007 Jeep Grand Cherokee 3.0l Crd cargo Full
Holy Cow! Loading groceries or, heaven forbid, trying to fit some home-improvement items or tools into the small trunk of my '00 Taurus is a bloody pain in the rear. Not to mention installing a child's seat in the back for a family outing. So when I was offered the Grand Cherokee to drive around for a long weekend, I squeaked out a yes, grabbed the keys, and hustled home. The Jeep did not disappoint. While it was not huge, the Grand Cherokee was pretty spacious and had a good amount of room in the rear for most of the items I needed it to carry. All the amenities were easy to access. Thank God for rear A/C. The brake and accelerator pedal control was pretty sweet as well and made adjusting the pedals to my stubby legs one-touch simple. I've heard about the turbo lag, and if it weren't for an alert truck driver, my first experience with it would have been ugly. Either it was the stink of panic in the air or the fact that I was sitting motionless in the middle of L.A. rush-hour traffic, but this guy must have known I was in a little bind and gave me the space and time I needed to get out of trouble. After the first encounter with this particular issue, believe me, you are quickly educated on what not to do.
The final judgment was rendered by my 6-year-old daughter, who, when not seeing her new Jeep in the driveway, looked at me like I just kicked her dollhouse, and said "Where is the nice red car, Daddy?" I had to explain that we only had the vehicle for a few days. We both had a good cry and crawled back into the Taurus.-Mark SnyderDiesel Power Art Director