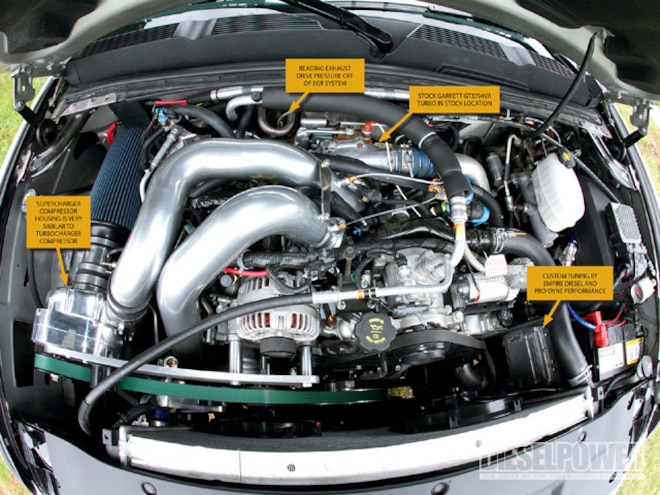 We caught a glimpse of this super turbocharged Duramax at the TS Performance event in Bowling Green, Kentucky. Ross Pierce, the owner of this ’08 LMM Duramax, had Empire Diesel install the F-1C centrifugal ProCharger to assist the stock Garrett variable geometry turbo. The F-1C has a maximum speed of 74,000 rpm, flows 1,750 cfm, and produces a maximum of 12 pounds of boost in this application. Together, the turbo and supercharger make a total of 50 to 60 pounds of boost. Empire Diesel is almost ready to offer these kits to the public. The claimed benefits of having both a supercharger and a turbocharger include more throttle response, increased power, 31?2-mpg increase, and a 300-degree drop in exhaust gas temperatures. Plus, you will have everyone within a quarter of a mile wondering what’s making that cool whine under your hood.
View Photo Gallery | 2 Photos
Photo 2/2   |   super Turbocharged Duramax Diesel Engine overhead View
First-Of-Its-Kind Duramax
•Twin 14-inch electric fans
•Spearco intercooler
•Stock Garrett AVNT GT3794VA turbo
•Aftermarket coolant reservoir
•The second battery was relocated to the bed
•The F-1C centrifugal ProCharger spins 5.4 times faster than engine speed thanks to the gear-driven overdrive
•Eleven-inch crank pulley
•Eight-ribbed serpentine supercharger belt