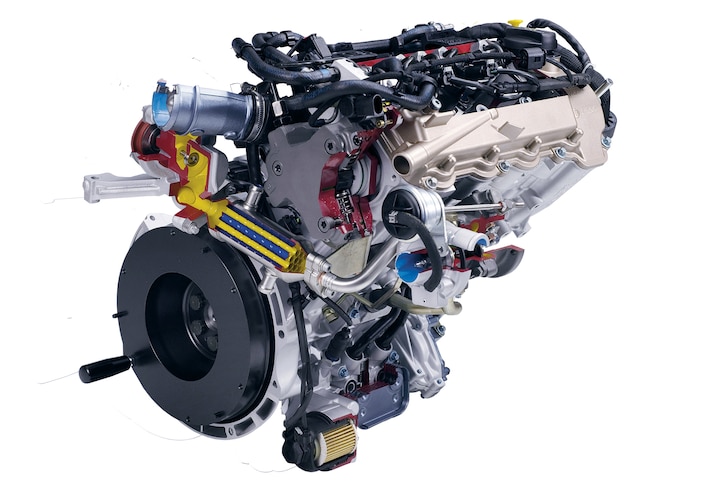 You're looking at the world's smallest direct-injection diesel currently in production. Built by Mercedes, this 799cc three-cylinder oilburner weighs just 190 pounds and powers the $16,750 smart fortwo car from 0 to 62 mph in 16.8 seconds while still providing up to 69 mpg.
View Photo Gallery | 2 Photos
Photo 2/2   |   799cc CDI Three Cylinder Diesel Engine side Angle
For some perspective, this 0.8L CDI diesel produces 67.6 hp per liter—that's like a 6.7L Cummins making 453 hp. European aftermarket companies such as BRABUS are working to increase the engine's standard 54 hp and 96 lb-ft of torque. Diesel Power would like to see what nitrous and a twin CP3 kit could do for this technologically advanced diesel.
* The three-cylinder, 0.8L engine features a 2.58-inch bore and a 3.11-inch stroke and makes 54 hp and 96 lb-ft of torque
* The Bedplate, block, and cylinder head are all made of cast aluminum
* The Cylinder head uses two valves per cylinder
* The turbocharger has a 1.2-inch-diameter compressor wheel, which spins to an incredible 280,000 RPM!
* An electropneumatically actuated valve mixes up to 60 percent of the exhaust gas (EGR) with the intake signal
* The EGR cooler uses a floating core
* The Bosch EDG15C common-rail injection system delivers fuel at up to 23,200 PSI