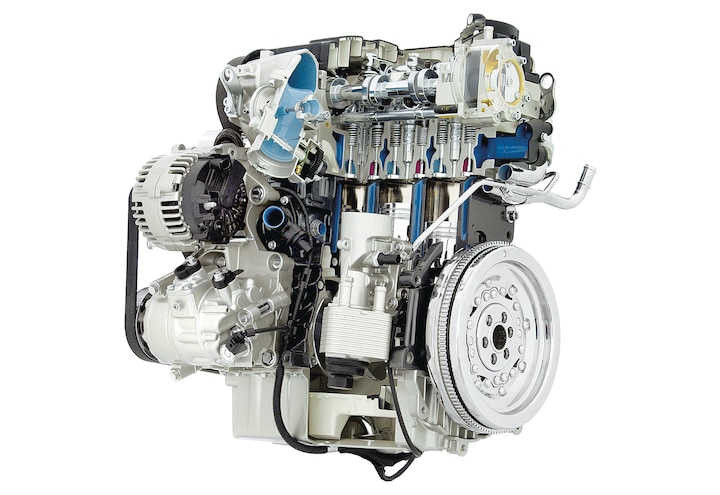 Volkswagen's 2.0L TDI four-cylinder, inline, turbocharged, direct-injected, common-rail diesel engine could be just the catalyst for the dieselization of America. The engine makes 140 hp and 236 lb-ft of torque and is capable of delivering an EPA-certified 30 mpg in the city, and 41 mpg on the highway when powering the '09-and-newer Jetta. According to Bosch (the manufacturer of the engine's fuel system), when driven properly, the engine can achieve as much as 60 mpg!
View Photo Gallery | 2 Photos
Photo 2/2   |   2 0L TDI Four Cylinder Diesel Engine side Angle
Technological Marvel
In order to sell a diesel in the United States, Volkswagen had to pass the toughest emissions standard in the world—Tier 2 Bin 5. To reach this goal, a BorgWarner turbocharger was selected because of its nano-coated compressor wheel and housing, which allows the turbo to survive the high temperatures and exhaust acidity that comes with low-pressure exhaust gas recirculation (EGR). Low-pressure EGR and high-pressure EGR (used on current vehicles) keeps cylinder temperatures down and therefore limits NOx production. Traditional EGR setups never run exhaust gas through the turbo, but this new setup does. It takes clean air from after the diesel particulate filter (DPF), cools it, and then routes it upstream of the compressor.
The other piece of the puzzle Volkswagen needed to break into the inefficient, gasoline-dominated U.S. market was individual cylinder pressure sensors. These came courtesy of Beru and double as a glow plug. Here's Beru's explanation, "Through an exact recording of the cylinder pressure, especially in the new downsized engines, higher peak pressures can be implemented and thereby standard combustion procedures brought closer to their limits. Consequence: higher engine performance and greater efficiency."
Biodiesel Compatible
Volkswagen's warranty covers B5 (5 percent biodiesel) and is in the process of testing for B20. The new engine's advanced fueling strategies, which lower emissions, tend to complicate the use of biofuels compared to older VW TDI engines that burn it with no problems. According to Volkswagen, "EPA research has concluded that if diesels were to power 1/3 of all light-duty vehicles in the United States, the shift would save approximately 1.4 million barrels of oil a day—equal to the daily shipments from Saudi Arabia to the United States."