Mixing and matching parts for performance 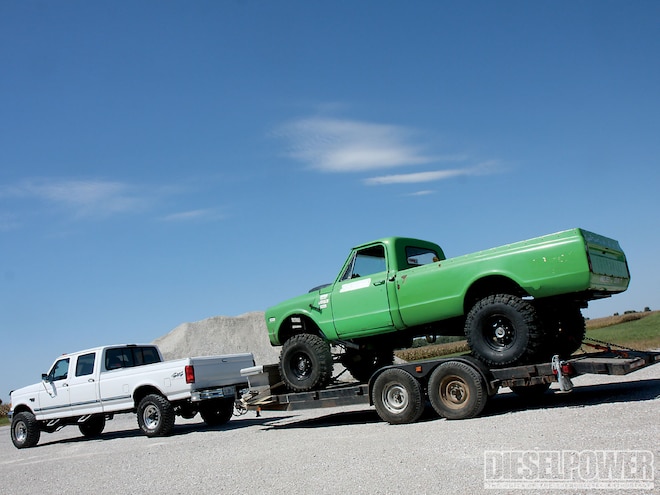 When I finally hooked my '97 F-350 up to 9,000 pounds worth of toy hauler last summer, I knew I'd accomplished my goal. The older Fords are by no means Super Dutys, but with some simple, affordable upgrades, they can handle just about any job the new trucks can. With good tuning, Stage 1 injectors, an intercooler, aftermarket turbo, Adrenaline high-pressure oil pump, and a tow-ready transmission, the exhaust gas temperature never exceeded 1,150 degrees when towing, and I was confident the E4OD automatic would hold up. Possibly the best part of this first mission was that the groundwork had been laid for me to take the truck to the next level (in the form of the Adrenaline, an electric fuel pump, turbo, and intercooler), which obviously includes making more horsepower.
View Photo Gallery | 2 Photos
Photo 2/2   |   1012dp Hybrid Power Stroke Injectors 1997 Ford F350 Side Shot With Trailer
In recent years, the use of what are commonly referred to as hybrid injectors has been all the rage in the 7.3L aftermarket. Coupled with custom tuning (which I'm proud to say is plentiful in this segment), hybrid injectors offer the best of both worlds to diesel owners: good towing manners and great performance potential.
One extremely popular version of this injector is the 238/80 hybrid. This injector gets its name from being able to flow a maximum of 238 cc of fuel per 1,000 shots and utilizes a nozzle that provides 80 percent more flow than the factory nozzle. The internals of this injector are typically based on the AB code injector (used in California model '97 and all early '99 7.3L Power Strokes). However, a 238/80 hybrid uses a larger-diameter plunger and barrel (7.1 mm vs. 6 mm) within the injector body, which is taken from a higher-flowing, BD code injector (commonly used in I530E International engines). The advantage-and the reason hybrids are so popular-is that by retaining the stock 16mm intensifier piston from the original AB code injectors, it requires no more oil than an equivalent AB unit to fire, yet it can flow almost as much fuel as the BD code injectors when taken to full stroke. Essentially, hybrid injectors allow you to get by with a single high-pressure oil pump, while providing the fuel capacity of a BD code injector. And although different variations of hybrid injectors exist, this combination of fuel volume and nozzle make the 238/80 hybrid a great multipurpose, street performance injector.
As tuning has gotten better and better, the hybrid has found a home in not only trucks built for competition, but also in daily drivers, hot street trucks, and tow rigs. The reason being, the 238/80 injectors can be tuned to allow a truck to make 250 hp to 550 hp, depending on supporting modifications (bigger turbo, fuel system, etc.) or driver preference. In my case, a set of hybrids can be detuned to work perfectly with my current setup by holding them back from their full potential. This holding of the reins will keep my street-sized turbo alive, my stock head bolts intact, and allow me to still make at least 425 hp at the wheels. By that same token, the perfect tow tune can be created in which power comes on smooth and progressively, the transmission's shift points are firm and crisp, and exhaust gas temp never exceeds 1,100 degrees.
One more benefit of going with a 238/80 hybrid is that it offers a guy like me room to grow more horsepower. Instead of going with a Stage 2 injector-which is typically capable of supporting 400 hp-I chose the hybrids, since they'll get me past that point right off the bat and can support 550 hp should I ever decide to add more airflow, head studs, valvesprings, and run more aggressive tuning. Of course, upgrading the transmission to handle 500 hp would be in store as well, because the hybrid injectors allow so much room for growth.
By way of hybrid injectors and good custom tuning, the aftermarket has truly opened my eyes to the fact that you can have it all. You can have much more fuel on tap without sacrificing idle manners or drivability, you can have a lot better performance, and you can have tremendously improved towing capability.
Mike McGlothlin
michael.mcglothlin@sorc.com