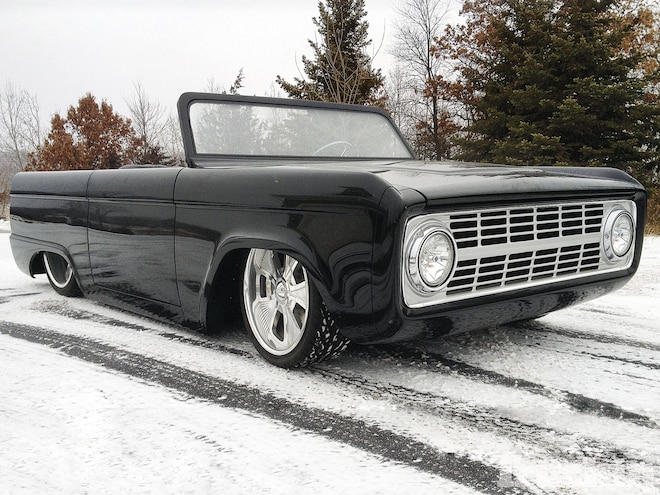 Got something to tell us? This is your spot. Tell us you like a feature, want to see more tech stories of your particular truck, or tell us we got a new truck test right or wrong. We've dedicated this one page to anything and everything you have to say. Think of it as our Facebook wall, only it goes to print instead of being forgotten in 5 seconds. Speaking of which, we'll be selecting some of the best posts on our Facebook wall and printing them here, so be sure to friend us at www.facebook.com/truckinmag. We can be reached at max.matthewson@sorc.com.
Much Appreciated
I was very delighted to see my truck in the May 2012 issue of Truckin magazine. I was actually alerted by a friend when he saw it first. Your article is awesome and very accurate. We've made a few changes to the lightning by adding water and methanol injection from Snow Performance. My horsepower now is 1,032 and 887 on the rollers.

Thank you again. It was so nice to see that my truck did make it in Truckin magazine

Ed, we're glad you enjoyed the article. It took a little while, but it was worth the wait.
View Photo Gallery | 7 Photos
Photo 2/7   |   whatd You Say Issue 9 2004 Ford F150 Lightning
Far From the Norm
I'm about done with a radically different shop truck build. It's a '63 Ford aluminum Aero step-van that we put a '93 S-10 chassis underneath. We are currently finishing the body drop and back half. Coy gave us some 20x15s so we had to step it up a notch. If the truck is something you might be interested in featuring, I would love to get together and talk some more.
Scott Dees • Scotts Speed and Custom

Scott, after we picked our jaws up from the floor, we all said a resounding yes. Send us some more photos man, that thing is awesome.
View Photo Gallery | 7 Photos
Photo 3/7   |   whatd You Say Issue 9 1963 Ford Aero Step Van
New vs. Old Logo
I like the new Truckin format with all the new articles such as Tool and New Truck Reviews, but I like the older Truckin' logo better than the new one.

Did you mean this groovy logo? Thanks for the feedback, we appreciate the support.
View Photo Gallery | 7 Photos
Photo 4/7   |   whatd You Say Issue 9 older Truckin Magazine Logo
Best Custom Truck Line of the Week
When our buddy Ryan at Bed Rug asked us if our F-150 had the optional tailgate step, he said, "Hey man, does that Ford have the stripper pole in the bed?"

Absolutely classic Ryan!
Bad@$$ Bronco
When we sent Jeffrey Kari an email to check in on his five-year Bronco build, we were the ones who got a huge surprise. Jeffrey wrote: "Dan, I made the Minneapolis show and on set-up day I had a very good response to it. Many people wondered what I started with because they had never seen a Bronco so low to the ground. My favorite comment so far was ‘Goes to show you can make anything look cool.'"

Holy cow Jeffrey, your Bronco sure has come a long ways since you emailed us photos of the frame nearly five years ago. We can't wait to see it in person so we can do a full feature shoot on your badass Bronco.
View Photo Gallery | 7 Photos
Photo 5/7   |   whatd You Say Issue 9 ford Bronco Pickup
We receive funny questions all the time, but this one was worthy of print. On our Facebook page, we were asked, "What is your most embarrassing moment behind the wheel of your truck?" Here are our answers:
Dan Ward - I was leaving a local car show in my S-10 project that was on the cover in 2005 when I felt the need to show off. I tried to grab second gear to bark the tires, but with the engine high in the rpm range all I heard was the gears grinding. I was and still am a knucklehead.
Max Matthewson - So I was driving Project New Guy around, just cruising the 15 when I saw a buddy of mine. Trying to be Mr. Cool, I laid the back end out and threw sparks all over the freeway. I continued home thinking nothing of it. Coming out the next morning to find a giant pool of gas under my truck was surprising to say the least. Apparently, during the act of dragging my truck, I ripped a hole in my gas tank. Needless to say, that isn't my proudest moment….
Rob Munoz - Anytime I drove the old Lightning project with the airbrushed barbwire.
View Photo Gallery | 7 Photos
Photo 6/7   |   whatd You Say Issue 9 ford Lightning
Harley Camilleri - After trying to show a Mustang driver what was up after he cut me off, I decided to lay down some rubber and get the backend sideways. I looked just like Ken Block until my rearview mirror was filled with red and blue police lights, and I was forced to pull over in front of a hair salon filled with hot chicks. A cop had watched me drift through the turn, but thankfully he let me off. The girls, however, weren't so kind.
Jeff Dahlin - I spent the evening in an Autozone parking lot trying to diagnose a battery or starter problem that I finally realized was caused by a failing starter solenoid. The guys at Autozone offered to let me borrow a screwdriver to change it out, but then realized someone was already using the one they loaned to customers. So I sat on my fender and slowly got the screws out using the edge of a dime, and then put the new one in place using the same method. I finally got the Bronco to start and drove out of the parking lot…only to have my hood fly up and BANG! it hit the windshield and roofline. I had forgotten to secure the hood properly. Cracked windshield, dents in the roofline, hood hinges hyper-extended and bent. I pulled over and had to actually hit the hinges with a hammer to get them to fold back into place and close.

- OF
By Jacob Jackson
23 Articles