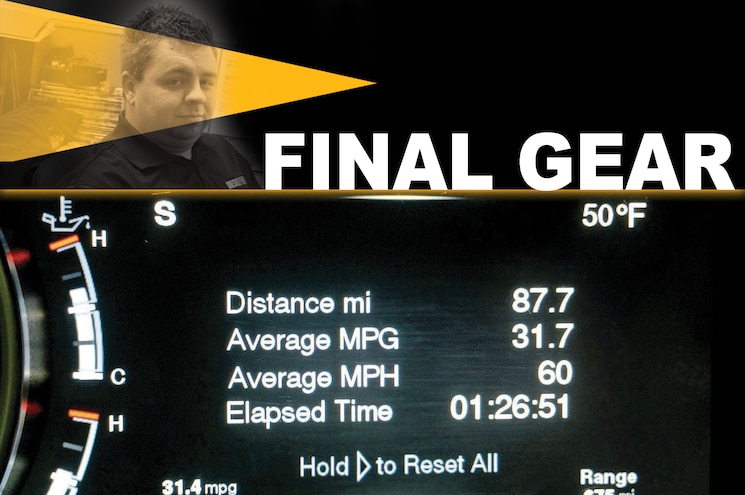 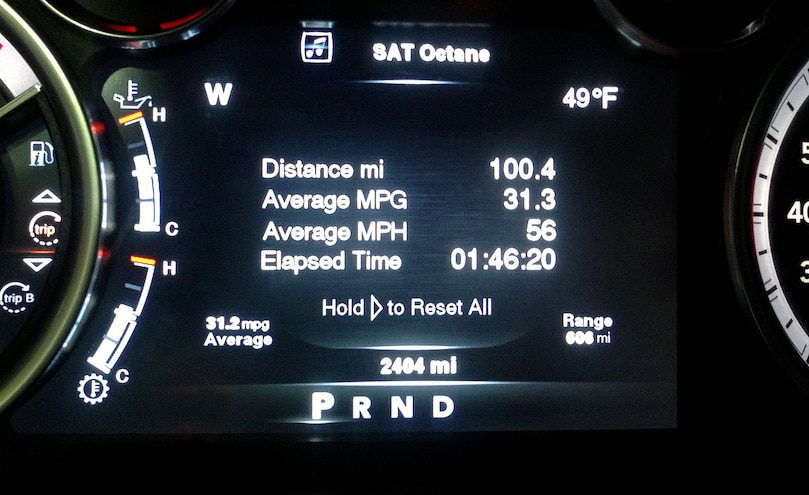 View Photo Gallery | 3 Photos
Photo 2/3   |   The first leg of our test took us south from Los Angeles on the 405 and 5 freeways. We sat in a bit of traffic at the start, which brought our average miles-per-hour down, but when we hit our turn-around point 100.4 miles later the truck was indicating an impressive 31.3mpg. Topping off with 3.202 gallons of fuel, we calculated out that the Ram had accomplished an honest 31.36mpg.
There are certain numbers that seem to evoke more emotion than others. Numbers like 10 percent off, 21 years old, and 30,000 pounds of towing capacity. Since well before I started the ’14 Ram 1500 EcoDiesel road test (Sibling Rivalry, March 2014) everybody that heard of it asked me the same questions, “Are you going to try for 30 mpg?” and then after “Did you get 30 mpg?”
At first glance, it’s kind of an odd question. Never before has a full-size pickup gotten anywhere near that kind of fuel economy. At any other time this question would have just been laughed off, and the person asking it thought of as crazy. But with the introduction of the 3.0L VM Motori EcoDiesel engine by Ram and Jeep, the time has come that this once crazy notion of a 30-mpg-capable truck has become a reality.
On the first time out with the Ram 1500 EcoDiesel, Editor-in-Chief Holman and I set up a drive route that combined a good amount of open highway with some decent elevation change and a touch of city driving. At the end of the 500-mile loop we averaged what we thought was an impressive 28.47mpg. As it turns out, this statistic was spot-on with the hot-off-the-press EPA figures: 20mpg city/28mpg highway/23mpg combined and 19mpg city/27mpg highway/22mpg combined for the 4x4.
One of the biggest complaints about not achieving the magical 30mpg number centered from the fact that I don’t believe in the practice of hypermiling. In real life, people don’t drive that way, so to gather the most realistic fuel economy possible, neither did I. We could easily have fudged the numbers by finding a totally downhill route and coasting most of the way, or by driving at an unreasonably slow speed, but that would just do our faithful readers a disservice by giving out incorrect, and not repeatable, information.
To try and quiet the critics, I once again got behind the wheel of an EcoDiesel-powered Ram and set out with the intent of breaking the 30mpg barrier. This time, equipped with a similar crew cab four-wheel-drive truck, I conned my wife into going for a late night drive. After traffic died down a little in the Los Angeles area we hit the road, this time setting the cruise control right at the 65 mph speed limit. After completing 188.1 miles round trip we did the math and found that the truck had in fact broken the barrier by logging a hand-calculated average of 31mpg.
So there you have it, the Ram 1500 EcoDiesel is capable of an honest 30mpg, if you try for it. I have also heard from sources that if you hypermile the truck they can crack 35, and now I completely believe it. 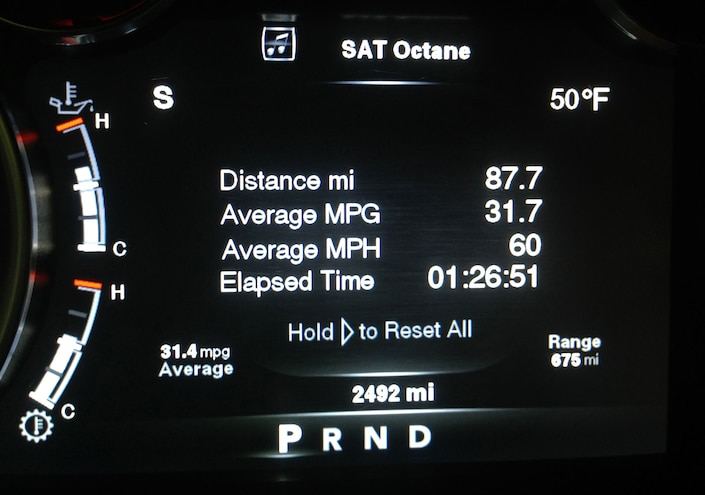