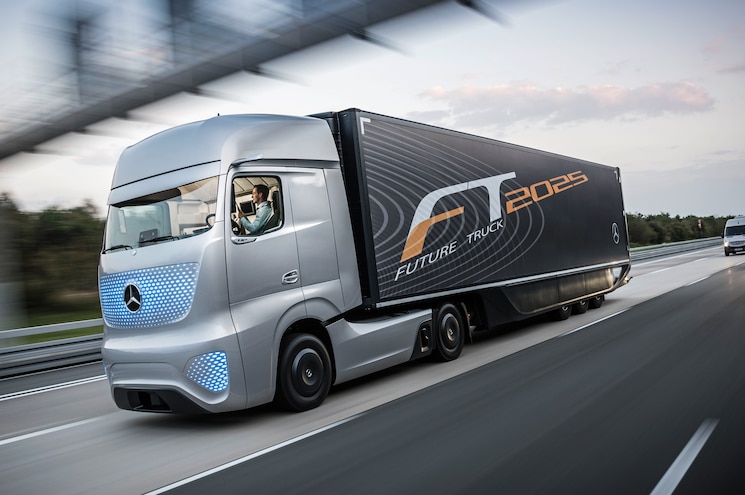 Much like the company's luxury cars, Mercedes-Benz commercial vehicles push the technological envelope with each new debut. For proof of this, one needs to look no further than the company's latest concept, simply named Future Truck 2025, a space-age take on the modern cab-over semi.
The Future Truck 2025, which will be formally revealed at the 2014 International Motor Show for Commercial Vehicles (IAA), cashes in on the current push toward autonomy. Mercedes predicts that in ten years, trucks could be driving autonomously on the highway, and the Future Truck shows that the company is working hard to be at the forefront of this technology. 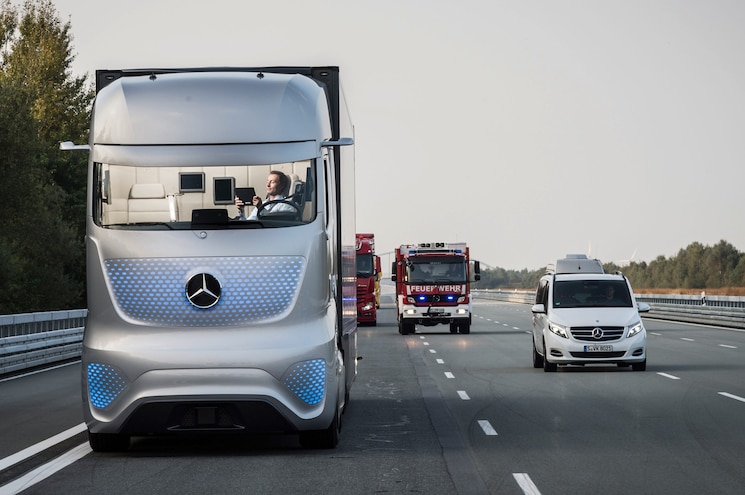 View Photo Gallery | 53 Photos
Photo 2/53   |   Mercedes Benz Future Truck 2025 Front View In Motion 02
The concept uses a new system called Highway Pilot to enable full, independent autonomy on the highway, relying on long- and short-range radar sensors that can scan the road over 800 feet ahead of the truck and a stereo camera that provides a 300-plus-foot view of the road. The final pieces of the Highway Pilot puzzle are radar sensors installed on either side of the truck, which can scan a 170-degree swath of the road surface on the left and right. The systems, working in tandem, can detect lane changes, "see" pedestrians and other vehicles, read road signs, identify road surfaces, and slow for traffic ahead.
Mercedes says that these autonomous advances have many benefits, like reduced fuel consumption and increased safety. Additionally, the company claims that autonomous trucks will attract more people to the trucking industry, solving the driver shortage that currently makes logistics a bit more complicated than it was in the past. The Highway Pilot system might even make shipping times more reliable and predictable, which is music to the ears of anyone who's spent weeks impatiently checking the mailbox for a service manual or car parts.
As you can see, the Future Truck 2025 conforms to Mercedes's current Sensual Purity design language, with gently curved surfaces that the company says suggest efficiency and emotion. When the truck is switched off, only the Mercedes emblem stands out of the front end, which looks like it's made of one piece of sheetmetal. But when the engine starts, trick LED lighting illuminates nearly the whole front end in soft, white light, which turns blue and pulsates when the truck begins driving autonomously. These LEDs look ineffective as anything but jewelry in the photos, but the company claims that they are intended to operate as headlights and turn indicators. 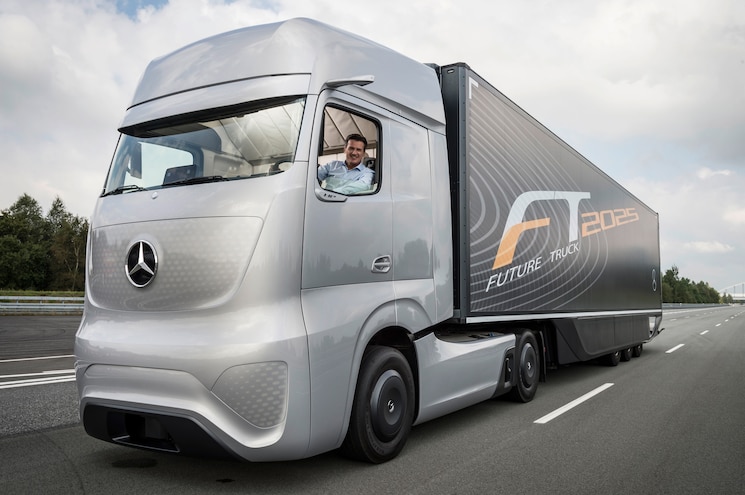 View Photo Gallery | 53 Photos
Photo 9/53   |   Mercedes Benz Future Truck 2025 Front Three Quarters View
The interior of the Future Truck 2025 is unlike anything currently available to truck drivers. Beautiful wood paneling curves up from the floor around the face of the dashboard, giving the interior a very cohesive look, and a tablet computer helps turn the space into a mobile office when the truck is driving autonomously. Indeed, the interior of the truck looks more like the modern workspace of a German architect than the cockpit of a work vehicle. There's even a digital picture frame on the cab's rear panel, helping the truck feel homey and comfortable.
There are still many legal and technological obstacles to widespread autonomous driving, but if Mercedes can back up its safety and efficiency claims, then there's probably no reason to argue against autonomous trucking and shipping. If it ever becomes a reality, the Future Truck 2025 concept shows that Mercedes is ready.
Source: Daimler Trucks