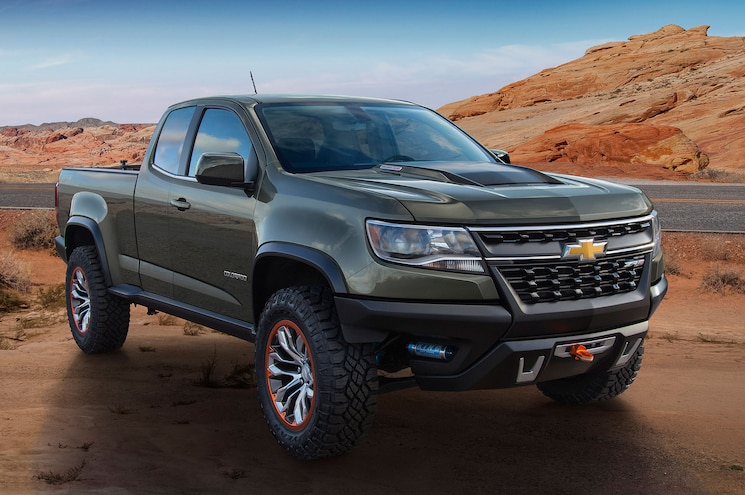 Few new trucks in recent memory have created as much buzz as the 2015 Chevrolet Colorado and GMC Canyon, with anticipation especially keen for the upcoming 2.8L Duramax diesel option for the 2016 model year. Sensing the Z71 trim wasn’t tough or bold enough for some customers, Chevrolet decided to dust off a designation fondly remembered from the ’90s S-10, which denoted a chunky, purposeful, off-road package for Chevy’s smaller truck, ZR2. The Colorado ZR2 concept hints at what Chevy might have up its sleeve for a future off-road–oriented Colorado. But of most interest to gearheads and diesel lovers is the announcement of the official North American–spec power for the 2.8L I-4 Duramax turbodiesel engine. For the U.S. market, the engine will produce 181 hp at 3,400 rpm and 369 lb-ft of torque at 2,000 rpm. The horsepower figure is down 16 from the global Colorado, but the torque figure is the same. The engine is mated to the six-speed automatic transmission.
Aside from what’s under the hood, there are a lot of other unique touches on the ZR2 concept, starting with a 4-inch-wider stance. The truck also gets revised front and rear bumpers to increase approach and departure angles, with integrated flip-out tow hooks. A 2-inch lift and new front control arms further enhance off-road capability. The ZR2 concept also features King remote reservoir coilovers. 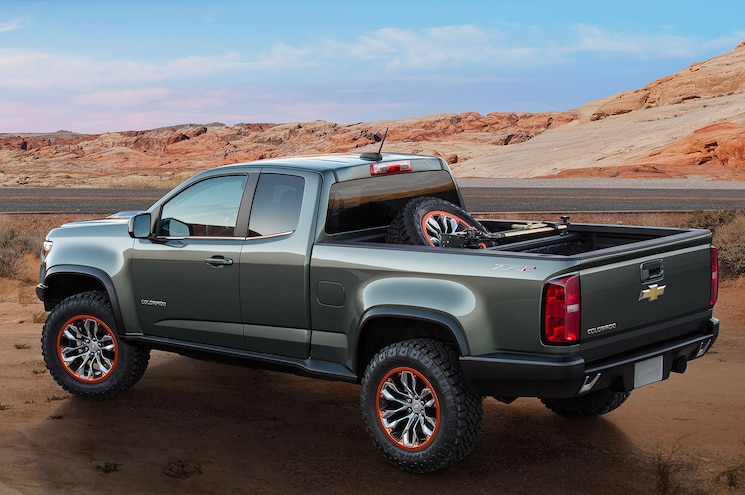 View Photo Gallery | 14 Photos
Photo 2/14   |   2015 Chevrolet Chevrolet Colorado ZR2 Concept Rear Quarter
Bolstering the ZR2 concept’s off-road credentials even more are front and rear locking differentials, and integrated auxiliary switches on the “piano” key bank on the center console for winches and auxiliary lighting. The ZR2 also gets a bed-mounted spare wheel and tire and a 48-inch Hi-Lift jack. The blacked-out front grille and headlamp housings are accentuated by a power dome hood design inspired by the Duramax-powered HD trucks.
The interior gets ZR2 embroidery on the headrests and embossed floor liners. An inclinometer is also included on the ZR2’s gauge cluster to give the driver information on front-to-rear and side-to-side lean angles. The interior’s orange accent stitching mirrors the exterior’s orange accents on a Cyprus Green base.
Is the ZR2 concept a preview of a forthcoming production model? It’s anyone’s guess, but we’re hoping most of the tasty hardware on the concept finds its way to the assembly line, or at least the GM accessory catalog.
Source: General Motors