Will it Be a Mild Nip/Tuck or a Radical Overhaul? 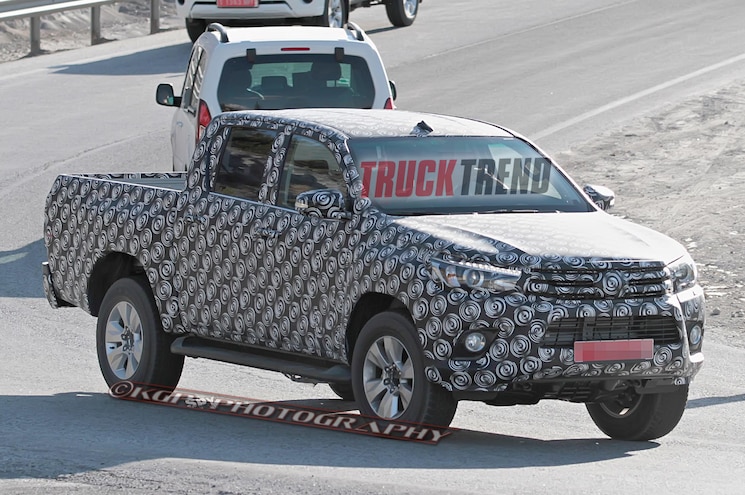 In what came across a little like “us too” opportunism, just a few days after Motor Trend announced the 2015 Chevrolet Colorado as its Truck of the Year, Toyota announced via social media that it would be showing the 2016 Tacoma at the 2015 Detroit Auto Show. The Tacoma has long dominated the midsize truck segment, but you can bet Toyota is watching the new Colorado and Canyon carefully.
The new GM twins make the current Tacoma look hopelessly dated in comparison, but that’s a situation Toyota is likely to remedy in short order. However, as we’ve learned through experience, Toyota’s definition of “all new” is sometimes less comprehensive than other automakers, with new sheetmetal and interiors often wrapped around well-proven powertrains and platforms. However, we think Toyota will have to move beyond its usual incremental nip and tuck to keep the Tacoma competitive. Here are a few of our projections for features and attributes we expect to see on the new Taco.
Better Fuel Efficiency
This is the one area where the current Tacoma falls most glaringly short of the new GM models. The V-6 Tacoma’s fuel economy of 17 mpg city and 21 mpg highway yields the same 19 mpg combined rating of the much larger and more powerful Silverado with the 5.3L V-8, which has a 2 mpg higher highway rating of 23 mpg. This is even before GM’s expected transition to eight-speed transmissions for its trucks, which will likely improve city and highway fuel economy by an additional 1 mpg.
How will Toyota achieve this? There are multiple ways it could, but the most likely methods are an automatic transmission with a few extra ratios and either a downsized or direct-injected (or both) V-6. Some have even speculated the new Tacoma could get a 2.0L turbo I-4 as a base or intermediate engine. Expect at least a six-speed automatic but possibly even as high as a seven or eight-speed transmission. The 4.0L V-6 will probably get direct-injection, for a power bump to around 300 hp and 300 lb-ft of torque. We don’t see the base engine being a turbo I-4, but we could see Toyota utilizing the more modern 2.5L engine out of the Camry and other models or the 2.7L 1AR-FE out of the Venza. The 3RZ-FE 2.7L I-4 currently used in the Tacoma is unrelated to the Venza engine, despite similar displacement. The base I-4s could also get direct injection for better fuel economy and more power.
Although GM will be offering an optional 2.8L Duramax turbodiesel I-4 for the 2016 Colorado and Canyon, we don’t see the Tacoma offering a diesel option soon, if ever. True, the global Hilux has had a diesel powertrain option since time immemorial, but Toyota is all about sales volume, and the amount of R&D necessary to certify a diesel for the U.S. market probably doesn’t justify itself in light of the small number of units it will actually sell.
More Features/Refinement
It’s not too much of a stretch to forecast the next Tacoma will have a lot more sophisticated cabin electronics and integration. GM raised the bar substantially with the Colorado and Canyon, to the point where we can say expectations for the segment have been decidedly re-set. Expect more acoustical insulation in the cabin and more comprehensive smartphone integration than the somewhat clunky, layered approach on the current Tacoma. Expect the higher-trim models to have LED driving lights and possibly even full LED headlights. One handy feature we hope carries over to the new model is the optional AC power outlet in the Tacoma’s bed but possibly with a higher load and voltage rating to handle higher-draw items such as blenders and power tools. Although not really a “convenience” feature based on the spyshots we’ve seen, the new Tacoma will finally be getting rear disc brakes.
Plenty of Variations, But No Regular Cab
As with the current Tacoma, there will probably be dozens of different trim, drivetrain, and cab configurations, but Toyota already announced that the regular-cab Tacoma was gone for good. This is no great surprise, considering Toyota was the last holdout in offering that configuration when most other midsize truck makers had abandoned it. There may be a new TRD Pro model at some point but probably a year or two out from introduction.