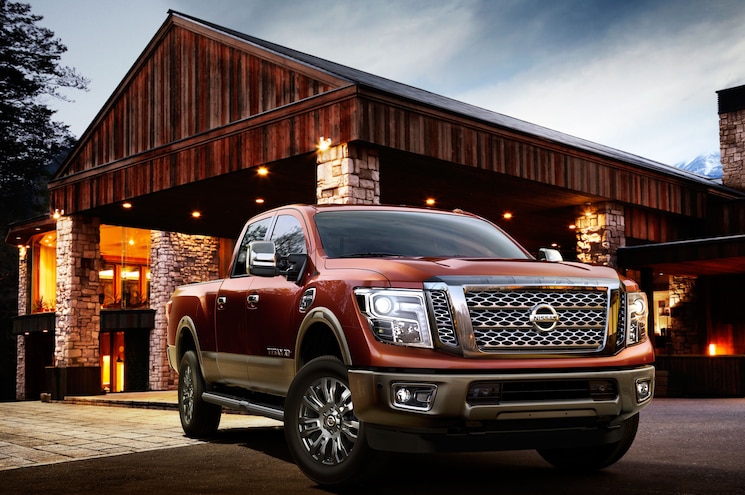 You can’t blame Nissan for promoting its next-generation Titan loudly and proudly with the social media hashtag #cumminssoon. After all, it’s been more than a decade since the original Titan launched in 2004, and the truck still in showrooms is largely unchanged since then. The original plan was to share a platform with the Ram 1500. But once Fiat took control, those plans were scrapped, leaving Nissan back at square one. Well, Nissan doesn’t plan on staying a distant also-ran in the fullsize truck segment, and the 2016 Nissan Titan XD is irrefutable evidence of that.
Heavy-Duty Capability, Half-Ton Comfort
With the Titan XD, Nissan is promising a whole other level of capability in the light-duty segment by incorporating several features more closely associated with HD trucks into a smoother-riding, more comfortable package. This idea is not entirely new, with General Motors briefly offering 1500 HD trucks in the early 2000s, and Ram offering the softly-sprung 1500 Mega Cab for a time. Prior to the Super Duty, Ford also offered an F-150-based F-250LD with oddball seven-lug wheels. But Nissan’s approach seems much more methodical and deliberate. Let’s take a look at some of the hardware. 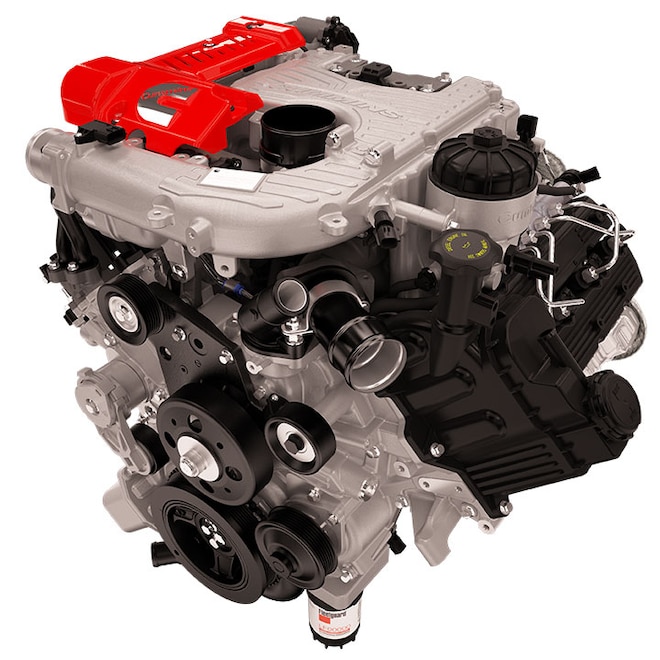 View Photo Gallery | 58 Photos
Photo 2/58   |   2016 Nissan Titan Xd Cummins V8 Left Front View
First of all, the engine. It is Cummins’ first light/medium-duty V-8 of the modern era. Nissan is hoping to cash in on the popularity of Cummins engines in the Titan XD, a legacy built largely on the shoulders of Chrysler’s Ram HD trucks. But the ISV V-8 is an entirely different animal than the B-series inline-six engines that have powered Rams since ’89. The 5.0L V-8 features double-overhead cams, 32 valves, a compacted graphite iron (CGI) block, and Cummins’ new M2 two-stage turbocharger system, designed to minimize lag by managing boost between the low and high-pressure turbos. Power ratings for the new engine are 310 horsepower at 3,200 rpm, and 555 lb-ft of torque at 1,600 rpm. The exclusive transmission is an Aisin-sourced heavy-duty six-speed automatic, the same unit used for the Ram 3500. This powertrain gives the Titan XD a towing capacity of 12,000+ pounds and a payload of 2,000 pounds. Specific towing and fuel economy figures were not announced, but Nissan is claiming a 20-percent improvement over an equivalent gas V-8 model. Taking the current Titan’s 13 city, 18 highway figures as a benchmark, some back-of-napkin calculations yield an unofficial 16 mpg city and 22 mpg highway. Be sure to check out our sister site Diesel Power's in-depth look at the new Cummins ISV V-8 engine!
Further emphasizing its heavy-duty credentials, the Titan XD borrows extensively from the NV fullsize vans, starting with a “proven” Nissan Commercial Vehicles chassis. The chassis was further reinforced with added torsional rigidity and resistance to vertical and lateral bending. Rare for the half-ton segment, the Titan XD has a built-in gooseneck hitch receiver in the bed mounted directly to the frame. For conventional towing, the Titan features a rear view camera with a trailer guide feature to allow the driver to precisely align the trailer ball with the hitch. The suspension is coils and double wishbones in the front, and proven 3.5-inch rear leafs with twin-tube shock absorbers. The rear axle will be familiar to Power Wagon fans as the same 10.5-inch AAM unit that underpins the Ram, however, Nissan stuffs it with an electronic locker of the company’s own design. The front differential on 4x4 models is 9.25 inches. Available wheel/tire combinations include LT245/75R-17, LT275/65R-18 and LT265/60R-20 sizes. Not wanting to repeat the early brake woes of the current truck, the Titan XD’s brakes also reflect its heavier-duty mission, with vented rotors at all four corners measuring 14.2 inches in the front and 14.4 inches in the rear, a significant upgrade from the current Titan’s 13.8 inch front and 12.6 inch solid rear rotors. 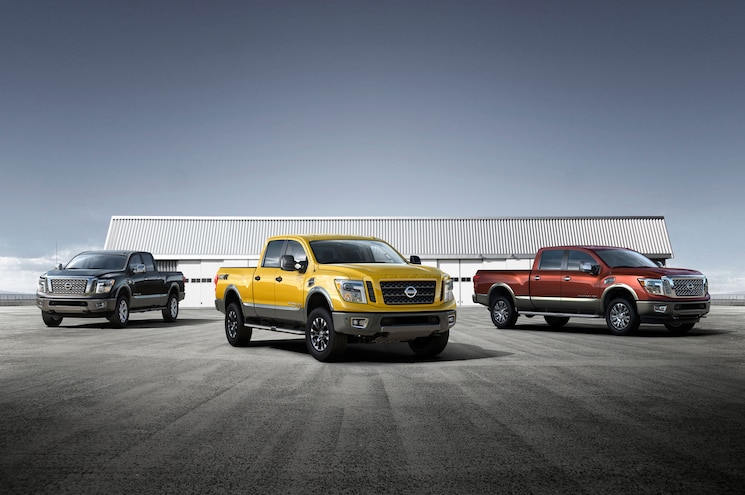 View Photo Gallery | 58 Photos
Photo 3/58   |   2016 Nissan Titan Xd Group Photo
Two of a Kind
The Titan XD is one of two distinct models in the 2016 Titan Lineup, with a unique frame and front-end styling, partially to accommodate the heavier weight and larger size of the Cummins engine, as well as the heavier-duty frame, but also to establish the XD’s placement as a viable alternative to traditional HD trucks for buyers looking for greater comfort and a more affordable price point. Nissan believes the Titan XD is a “white-space” truck to offer buyers a powerful, capable tool, but don’t need the full capabilities of today’s ¾ and 1-ton models. Official details on the two other gasoline engines are sparse for the moment, but we know for a fact that a gasoline V-8 and V-6 will also be offered. The leading candidate for the V-8 is the VK56DD direct-injected 5.6L out of the Infiniti QX80, where it produces 400 hp and 413 lb-ft of torque. The V-6 is a bit more of a mystery, but expect some version of the current VQ40 4.0L V-6, possibly updated with direct injection to increase power and fuel economy. Look for output to be in the 280-300 hp range, and torque to be in the same ballpark. The XD will reportedly be offered with a choice of the Cummins as well as a gasoline V-8.
Visually, the Titan XD is much more massive and imposing than its predecessor, but dimensionally, it’s not radically different. The XD model stretches 242.9 inches bumper-to-bumper, with a wheelbase of 151.6 inches and a width of between 79.4 and 80.6 inches, depending on configuration. The largest model of the outgoing Titan was the crew cab model with 7-foot long bed, which had a wheelbase of 159.5 inches, and an overall length of 244.2 inches. The XD features a 6.5-foot bed. Non-XD Titan models will offer King (extended) and regular-cab models, and three available bed lengths. The XD is nearly two inches taller than the tallest of its predecessors, the Pro4X, at 78.7 inches.
The exterior styling theme for the new Titan was “warrior-like” with designers getting inspiration from ancient battle helmets. Yet the design is thoroughly modern, with a chiseled shape. Love it or hate it, there’s no ignoring it, which was likely fully intentional. LED lighting is used extensively on the exterior, with available LED headlights, taillights and bed lighting in the XD model. 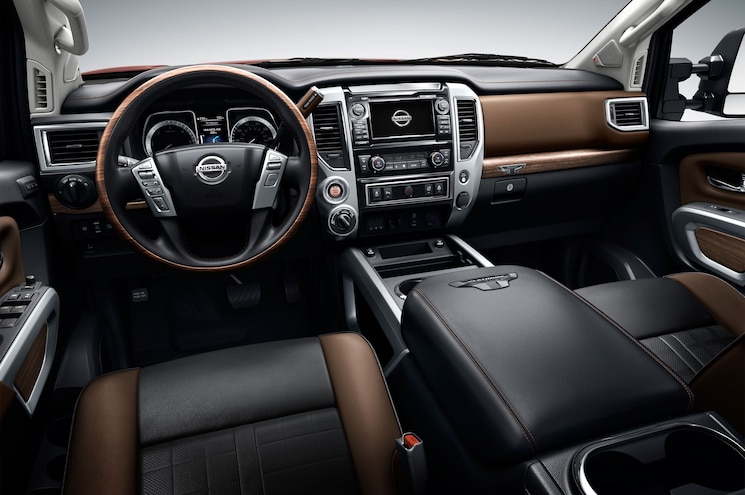 View Photo Gallery | 58 Photos
Photo 4/58   |   2016 Nissan Titan Xd Platinum Dashboard
One of our biggest gripes about the outgoing Titan was its plasticky, dated interior. Nissan made sure it didn’t make that mistake again with the ’16 model. Materials are significantly improved, with higher-trim models featuring black and tan quilted leather seating surfaces designed to evoke the quilting inside of a premium hunting jacket. In a surprising move away from the predominant industry trend for half-tons, the Titan abandons its console-mounted shifter for a column-mounted shifter to free up more storage space in the center console, which can accommodate a 15-inch laptop computer. Like many other recent Nissan models, the new Titan features available “zero gravity” seats to increase long-range comfort and reduce driver fatigue. The XD and other crew cab Titans also feature lockable rear underseat storage with a fold-up feature, and fold-out flat floor surface.
The factory-applied sprayed-on bedliner and Nissan’s Utili-track adjustable bed channel system carries forward, and the Titan XD also features in-bed storage options that can still be utilized with the addition of a tonneau cover or camper shell, one of the shortcomings of the RamBox concept. The compartments are watertight, drainable, and removable for times when extra bed capacity is needed. The Titan XD also features an available bed-mounted 120-volt AC power outlet, as well as full bed illumination.
Playing to Win
It’s clear Nissan plans on being a legitimate contender in the fullsize market with the Titan XD, as well as offering a full array of powertrains and cab/bed configurations, covering 85 percent of the fullsize market. Higher sales than the outgoing model are virtually assured, as the current Titan sells as many units a year as Ford sells F-Series every two weeks. From a volume standpoint, it has little chance of toppling Ford or Chevy, but could give the Tundra and Sierra some serious competition. We’ll have to see how Nissan’s latest warrior battles it out the fullsize truck arena, but we can confidently say with the hardware it’s bringing to the table, it’s battling to win.