Which Hauler Stole the Show? 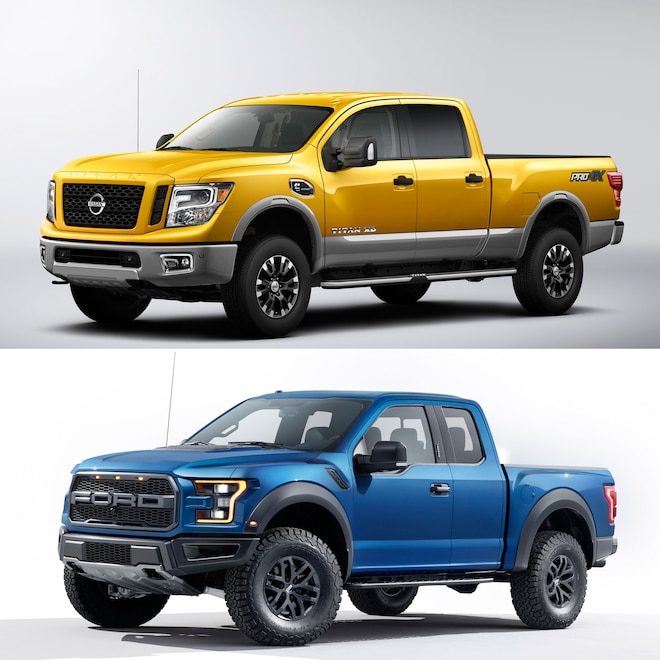 This year’s Detroit Auto Show was a big deal for the pickup truck segment, with two highly significant vehicles being unveiled: the 2016 Nissan Titan XD, a long-overdue update for Nissan’s fullsize truck, and an advanced preview of the 2017 Ford F-150 Raptor, the next-generation of one of the most popular off-road trucks in recent memory. Let’s take a look at a few categories and see which truck came out on top.
Significance: Titan XD
There’s no doubt the Raptor was a significant debut for Ford, as within minutes of the 2015 model’s debut there was already speculation and chatter about the next Raptor. Raptor or not, the F-150 is the big dog in the fullsize truck market and would probably be the best-selling model with or without niche variants. However, relative to where the company stands currently in the truck market, and as symbolic of its ultimate aspirations, the Titan XD is far more significant to Nissan.
Just a few years ago, many were publicly wondering if Nissan would pull the plug on the Titan altogether, with monthly sales often dwindling below 1,000 units. A few statements by Nissan executives emphasized the company’s commitment to the fullsize truck market, with promises a new Titan would be #cumminssoon. The fact that it’s going to be the first light-duty V-8 diesel, and the fact that it’s a Cummins engine -- from one of the most respected diesel engine makers in the world -- underlines the fact that Nissan is aiming to make a bold statement with the new Titan and recapture much of its lost market share.
Popularity: F-150 Raptor
Despite the Titan XD out-pacing the Raptor by a nearly four-to-one margin in terms of page views on our website, we would probably say the Raptor has a broader appeal to a general audience than the somewhat niche Titan XD. Although we expect initial demand and sales to be strong for the Titan XD, when the new Raptor starts rolling off the line, we anticipate months-long waiting lists, five-figure dealer markups, and plenty of action-packed photos of it kicking up sand, blasting across lake beds, and jumping whoops online and in magazines. Let’s face it, the Raptor is sexy in a way that the handsome, but comparatively staid Titan just can’t quite match. 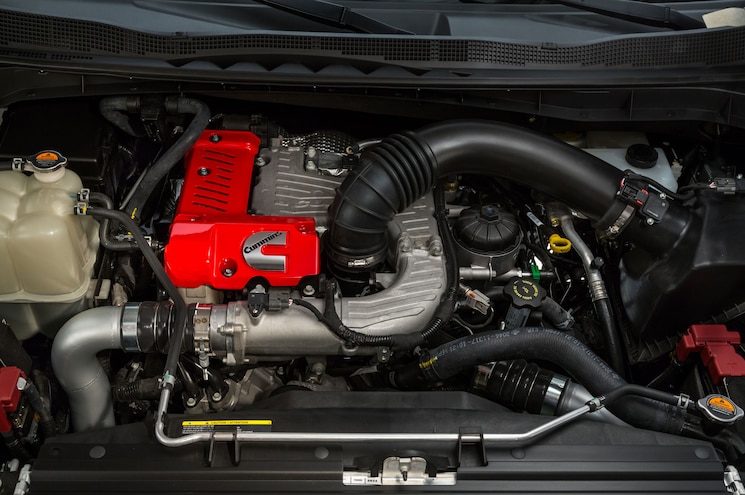 View Photo Gallery | 9 Photos
Photo 8/9   |   2016 Nissan Titan Xd Cummins V8 Underhood
Functionality: Titan XD
This is somewhat of an unfair comparison, as the Titan XD is positioned squarely as a work tool, with its 12,000-plus pound towing capacity and 555 lb-ft of torque, whereas the only role the Raptor has to play is being a cool dirt toy. Although the top-rated F-150 has a comparable towing capacity to the Titan XD, we expect the new Raptor, like its predecessor, to sacrifice some ultimate capability for more suspension compliance and travel to better handle the aggressive off-road use it’s likely to encounter. Look for a max towing capacity on the Raptor of between 8,000 and 9,000 pounds and a payload of 1,500 pounds or less. Still highly respectable figures, but ultimately, the Raptor is built less for work and more for play. 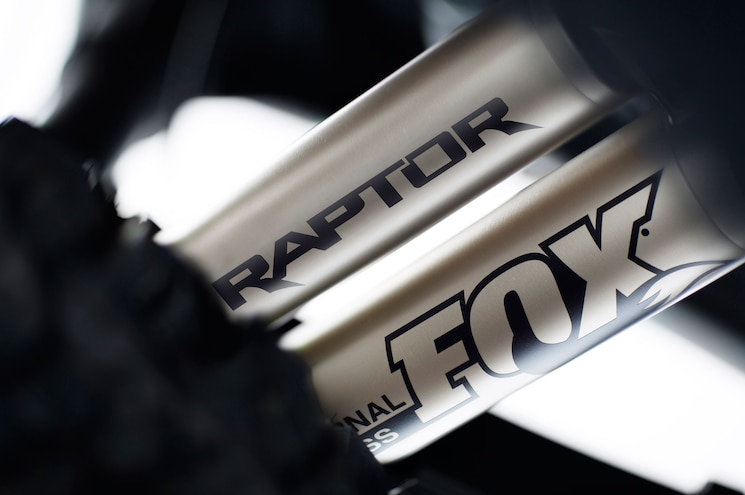 View Photo Gallery | 9 Photos
Photo 9/9   |   2017 Ford F 150 Raptor Fox Shocks
Technology and Engineering: F-150 Raptor
There’s no disputing the offering of a Cummins V-8 turbodiesel, Aisin heavy-duty transmission (same as used on the Ram 3500), and HD-spec axles on the Titan XD raise the bar and expectations for the light-duty segment, but none of those technologies in and of themselves are really revolutionary or breakthrough. Now going into its fifth year of production, one could argue Ford’s EcoBoost V-6 is starting to become old hat, but the debut of the Ford GT supercar with 600-plus horsepower and Ford’s confident proclamation that the high-output 3.5L EcoBoost in the Raptor would make more power and torque than the outgoing 6.2L V-8 show there’s plenty of potential still left in Ford’s blown bent six. The Raptor will be the First F-150, if not the first fullsize truck, to get a 10-speed automatic, and it’s clear the F-150’s aluminum body isn’t the only technological tour-de-force left in this truck.
The Verdict: Tie
Out of four categories, we have two wins each for the Nissan and the Ford. As is usually the case, each model has its fierce partisans ready to defend their favorite brand and shoot down any arguments in favor of the competition. We expect no different with this story, based on the volume and passion of the feeback we get through letters and social media. Now it’s time to have your say. Which truck do you think had the bigger impact at the Detroit show?