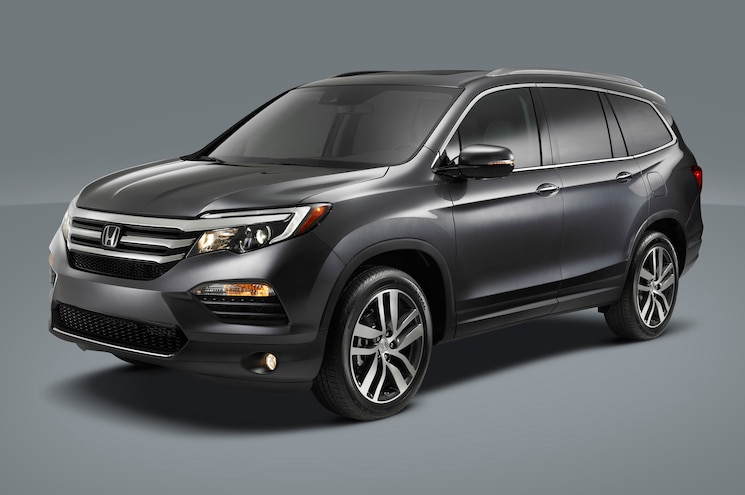 It’s been said imitation is the sincerest form of flattery. And there’s plenty of imitation in the automotive world, whether it’s the weed-like proliferation of fake fender vents or Chinese automakers liberally copying foreign brands for their home-market models. However, in this case, Honda is copying one of its own superstars. The Honda CR-V is the single best-selling SUV in the U.S. So when it came time to restyle the midsize Pilot model, the company figured making a plus-size CR-V probably wouldn’t be the worst idea. The interpretation of the CR-V’s style onto a midsize platform has culminated in the 2016 Honda Pilot. Outwardly, the new Pilot looks like a larger CR-V, but under the skin, it shares a lot of its hardware with the Acura MDX that was new for 2014. Specific dimensions such as wheelbase, width, and overall length were not disclosed, except that Honda did mention the new Pilot is 3 inches longer than its predecessor. The current model is 191.4 inches long, giving the new model a length of approximately 194.4 inches. For comparison, the MDX is 193.6 inches long, riding on a 111-inch wheelbase. The 2015 Pilot has a 109.2-inch wheelbase.
Usefully Bigger
Honda has made sure the added length has not gone to waste, citing the capacity to carry an 82-quart cooler behind the third-row seat, a feature Honda claims is a class exclusive. And getting to the third-row seat is easier than ever now, thanks to the one-touch walk-in second-row seat that slides and tilts forward with just the push of a button. Buyers that opt for the available second-row captain’s chairs can also sneak in between the second-row seats. Specific power output was not given for the Pilot’s new 3.5L direct-injected Earth Dreams V-6, but for all intents and purposes, it’s the same engine found under the hood of the current Acura MDX. Count on horsepower of at least 280 and torque of 260-plus lb-ft. The MDX produces 290 hp and 267 lb-ft. Buyers will have the choice of either a six- or nine-speed automatic transmission, depending on trim level. As with the outgoing model, and par for the class, the Pilot will be available in front- or all-wheel drive. Along with the upgraded powertrain, a claimed weight loss of 300 pounds will likely help improve the Pilot’s fuel economy ratings, which are currently 18 mpg city, 25 mpg highway for the front-drive model and 17 city, 24 highway for all-wheel drive.
Gadgets Galore
Midsize SUV shoppers expect plenty of comfort and convenience features, and the Pilot does not disappoint. For all the family’s gizmos and gadgets, five USB outlets are included in the cabin, along with an HDMI input for a gaming console, two 12V DC outlets, and one 115V AC power outlet. The 9-inch rear entertainment display now also plays Blu-ray discs.
Controlling climate and entertainment functions is a new 8-inch touchscreen with an Android-based operating system and a more powerful processor. A satellite navigation system is optional. Other options include full-LED headlights and taillights, LED interior reading lights, lane keeping assist, collision mitigation braking and adaptive cruise control, and a new road departure mitigation system. Like the 2015 Pilot, the 2016 model comes with a standard rear-view camera. Thanks to these technologies and use of high-strength materials in the body structure, Honda is expecting a five-star NHTSA crash rating and a TSP+ designation from the Insurance Institute for Highway Safety .
The 2016 Pilot is built in Lincoln, Alabama, at the same plant as the MDX and will go on sale in spring 2015. Pricing and official specifications will be announced closer to availability.