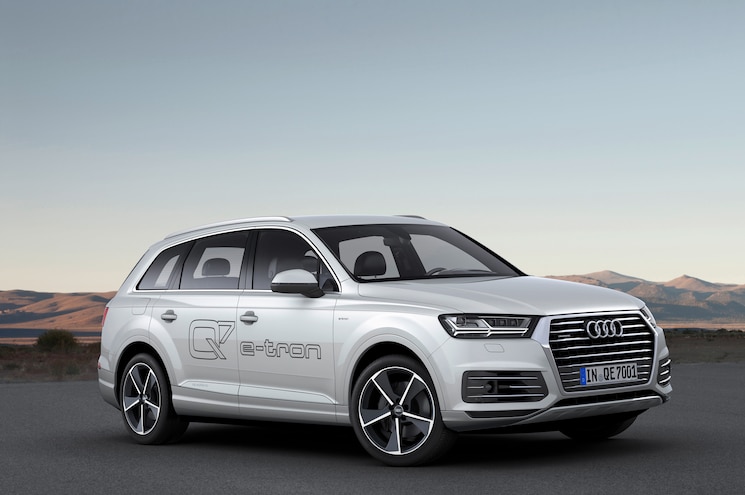 If you’ve ever had a sleepless night, chances are you’ve flipped on the TV in the hopes that the bizarre or mind-numbingly inane content will ultimately lull you back to sleep. One of the staples of late-night/early morning TV is infomercials. A hackneyed line from this genre that’s almost become a meme is “But wait, there’s more.” There’s nothing bizarre or inane about the 2017 Audi Q7 e-tron TDI Quattro, but there are plenty of “But wait, there’s more” with this pioneering luxury SUV.
But Wait, There’s Less
The one thing the new Q7 doesn’t have more of is weight. Compared to its equivalent non-hybrid predecessor, the new Q7 is as much as 700 pounds lighter. The difference with the e-tron model will likely be less, due to the added weight of the hybrid hardware, but whichever way you slice it, it’s still an significant achievement. The other big part of the “less” story of the Q7 e-tron is fuel consumption. Although European tests and standards are substantially different than U.S. EPA protocols, the efficiency claimed by Audi for the Q7 e-tron TDI is impressive nonetheless. With a fully charged battery, the Q7 e-tron gets a claimed 117.6 mpg. Naturally, its fuel economy once it’s surpassed its 34.8-mile all-electric range is depleted will probably be quite a bit less, but we’re still talking about an surprisingly frugal fuel-sipper for its size and class. 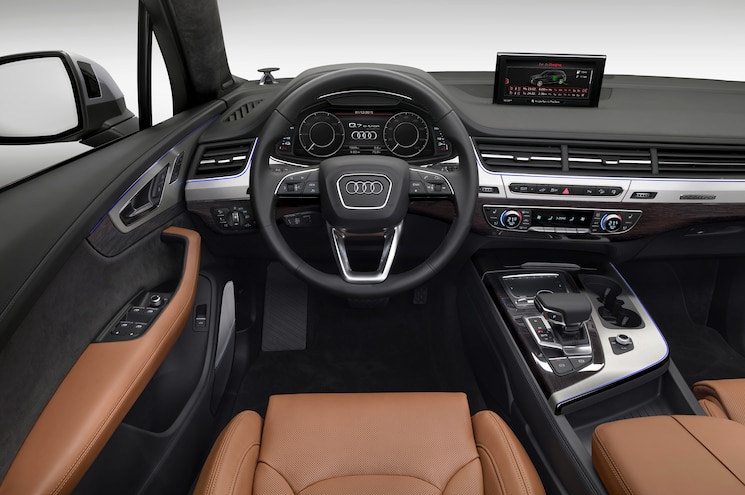 View Photo Gallery | 17 Photos
Photo 2/17   |   Audi Q7 E Tron 30 TDI Quattro Steering Wheel And Dashboard
Parsimonious Power
It’s one thing to be economical, but it’s another to balance economy with performance, and Audi has sacrificed little to none of its legendary performance for its flagship SUV. The Q7 e-tron TDI has a claimed 0-60 time of 6 seconds flat and a top speed of 139.8 mph. The combined system power is 373 hp and 516 lb-ft of torque. Claimed total electric and diesel range is a bladder-busting 876 miles. However, the quest for efficiency doesn’t end with the plug-in hybrid system.
The Q7 e-tron TDI also incorporates predictive powertrain management for mapped journeys and will dynamically choose between four drive modes based on the route selected through the navigation system. To further enhance efficiency, the vehicle has a coasting mode in which the diesel engine and the electric motor shut off, allowing momentum to carry the vehicle. The powertrain re-engages instantly when the driver applies throttle. As is becoming increasingly common in luxury and even mass-market vehicles, the Q7 e-tron TDI offers available adaptive cruise control but also adds active steering at speeds below 40 mph.
Official pricing has not yet been announced for the Q7 e-tron TDI, nor has an on-sale date for the U.S., where it may be the first diesel-electric plug-in hybrid vehicle offered. Sales start in Germany in spring 2016. You can read more about the non–e-tron Q7 here.