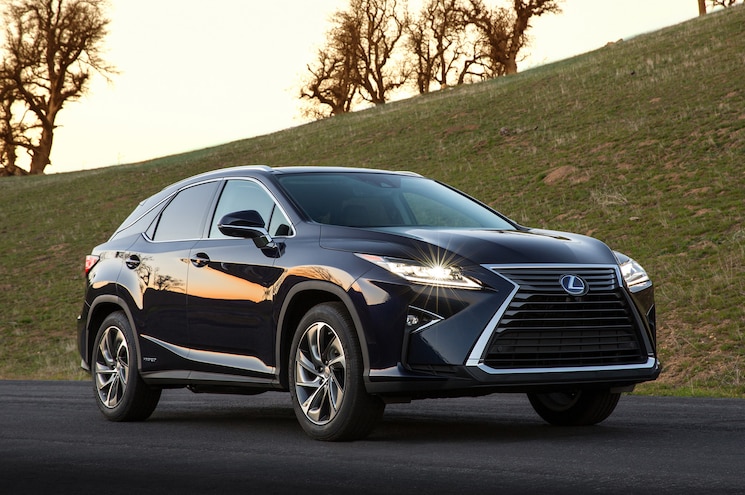 When you have a proven popular product, any changes to the formula are often fraught with peril and fear that the changes will alienate loyal repeat buyers. However, if any auto manufacturer can get away with it, it’s Toyota and especially the company’s upscale Lexus division. The brand has enjoyed decades at or near the top of customer satisfaction surveys, so short of an absolutely repulsive design, chances are both repeat and new buyers will snap up the new model just as enthusiastically as its predecessor. The biggest winner for Lexus over its 26-year history has cumulatively been the RX midsize SUV. First introduced for the 1999 model year in the U.S., the RX has sold more than 2.1 million units worldwide since its introduction, so its importance to Lexus cannot be overstated. For the 2016 model year, the U.S. and the rest of the world is getting an all-new RX, and while its style may be a major departure from its predecessor, the core attributes that have made the RX so popular over the years remain intact.
It’s Got the Look
The current RX has some contemporary Lexus styling cues that have been grafted on to it, to keep it in line with the rest of the brand’s current offerings, but the basic design dates back to the current model’s introduction in 2008. The new RX dives into the deep end of Lexus’ contemporary design language, with bold, edgy styling making it look more appropriate standing next to its aggressively styled stablemates, the NX compact crossover and RC coupe. In addition to full-LED front lighting, Lexus is especially proud of the styling elements near the rear of the RX, which include a blacked-out C-pillar designed to give the impression of a “floating” roofline, as well as wrap-around taillights that extend the lighting element from the edge of the rear doors onto the tailgate.
Premium Personalization
As is the trend among premium brands, the RX features several personalization options for the buyer that wants something unique. Although not quite to the bespoke standards of Rolls-Royce or Aston Martin, Lexus nonetheless offers the option of wheels with body color-matched inserts, Yamaha laser-cut interior ornamentation, and of course, an F Sport package to give the RX a sportier vibe. For the first time, the F Sport trim will be offered with both the non-hybrid RX350 and the RX450h. The F Sport trim will only be available with all-wheel-drive. Both powertrains have outputs of 300 hp, a gain of 30 hp for the non-hybrid model and a gain of 5 hp for the hybrid. All non-hybrid RX models get a standard eight-speed automatic transmission, which was previously offered only on the F Sport trim. The optional 19-inch wheels offered on the current RX are replaced with 20-inch wheels, giving buyers the option of 18 or 20-inch factory wheel sizes.
As expected in the premium crossover class, the new RX features an alphabet soup of standard and available safety features, including Vehicle Dynamics Integrated Management (VDIM), adaptive variable suspension, pre-collision braking, lane departure alert, lane keep assist, dynamic radar cruise control, and automatic headlight high beams.
The interior makeover on the new RX is nearly as dramatic as the changes on the outside, including a 12.3-inch center display. The optional rear-seat headrest monitors are now a generously sized 11.6 inches each. The outgoing model’s gated shifter is replaced with a more elegant-looking leather boot. Also new for the 2016 model are heated outboard rear seats. Size wise, the new RX is slightly larger than its predecessor in most dimensions, with overall length increasing just under 5 inches, width increasing by less than half an inch, and a 2-inch longer wheelbase. Fuel economy and pricing were not yet announced, with that information expected closer to the RX’s production availability in fall 2015.
The new RX, as visually exciting as it is (especially compared to its conservative predecessor), the emphasis is still clearly on comfort. Although its styling is a big change from the current model, we expect the new RX to get plenty of repeat sales from current owners, as well as entice some newcomers into the showroom and maintain its title as Lexus’ best-selling model.