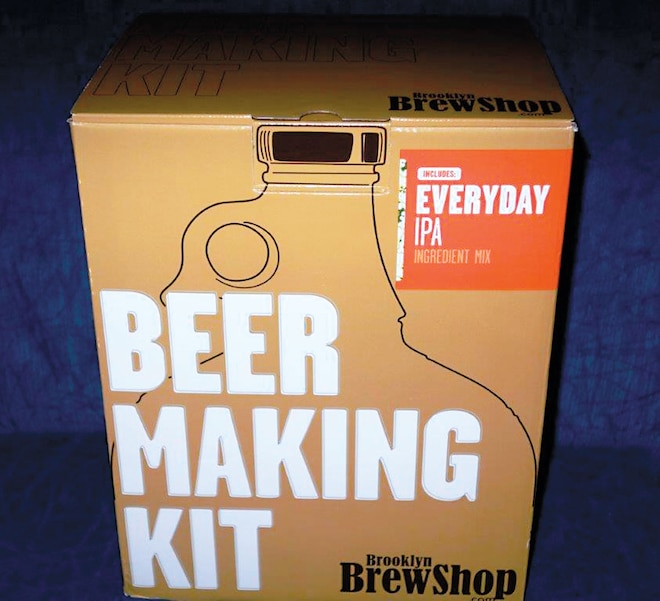 It’s December 27, 2014. We’re just a couple of days past Christmas, and despite knowing you won’t be reading this until we’re three months into 2015 (consult my column in the February ’15 issue for insights on how that works), I hope all of you enjoyed a fantastic holiday season. As these things go, mine was great.
While I enjoy selecting and giving appropriate, fitting, perfect (in my opinion) Christmas gifts for and to my loved ones, I’ve never been all that big on receiving gifts for the holidays. Don’t get me wrong, I truly appreciate people’s thoughtfulness for even considering me as someone they need to give a present, but it has been a long, long time since I’ve earnestly “wanted something for Christmas” from anyone.
With that being said, I’m sitting here thinking about a gift one of my dearest friends surprised me with on Christmas day: The Brooklyn Brew Shop’s home beer making kit. In recent years, I’ve become a fan of craft beers and IPAs (I really like reds and dark brews such as the Great Divide Brewing Company’s Yeti Imperial Stout), and every now and then I’ve wondered how easy, or difficult, for that matter, it would be to custom blend my own. Now that I’ve got this little setup, I guess I’ll be finding that out in the next few months.
This new excitement about making my own brewski has also rekindled a passing curiosity I’ve had since joining Diesel Power in July 2014: How easy, or difficult, for that matter, it would be to custom blend my own diesel fuel. Like the beer making system I just received, DIY fuel kits are available through the Internet.
Granted, make-it-yourself diesel setups are a lot more elaborate than my new tabletop brewery (some of the small-scale diesel refineries are quite similar to the backwoods stills that are used for producing illegal whiskey), but regardless of size, having the ability to make fuel of your own design is pretty darn cool.
It makes no difference whether you’re brewing beer or biodiesel, I think that while there certainly is a strong amount of “hobbyist” in people who make their own stuff, there also is an equally high level of “frugal” in those folks. I’m not saying home blenders hold money so tightly that it squeaks, but I do think most of us understand the true value—i.e. money saved—of developing homemade suds and oil.

View Photo Gallery | 2 Photos
Photo 2/2   |   Beer Making Kit
I guess it’s sort of ironic that my thoughts about this science project are ramping up right at a time when diesel prices have plummeted, from the near $4.00 per gallon we were paying here in Southern California for most of 2014 to more reasonable sub-$3.00 amounts.
While filling all of Big White’s fuel tanks (the ole girl has three) is still a major expense, the cost is considerably less than the $350 I paid to fill just two of those tanks (60 gallons total) back when we were in the thick of the big economic recession. Trust me, I’m very happy about this latest price drop!
Staff Editor Trevor Reed is hot for me to step up and give fuel making a try, and I’ve learned roughly $60 will score a rudimentary, manual starter set—a kit that will set you up for making about 10 500ml batches—from Utah Biodiesel Supply. Of course, that amount is a far cry from the volume that trucks and cars need, so figure on spending $1,000 to $1,500 for a full-on automated setup like the BioPro 190 by Springboard Biodiesel, which can churn out 50-gallon batches of diesel in 48 hours. Since machines like this also require such additional hardware as water tanks, filters, and transfer pumps, the bottom line can easily pass $10,000 by the time it’s up and running.
Why don’t you all weigh in via email with your “yay” or “nay” on home-brewed biodiesel and provide reasons why you do or don’t think it’s a good idea (for me, or anyone)? I’m also very interested in hearing from those of you who actually do produce your own fuel and hope you will share all the critical details about the process, like total production costs (materials, time, and money) vs. savings, vehicle performance, and such.
Your input just might help answer that question I mentioned earlier: “How easy, or difficult, for that matter, would it be to custom blend my own diesel fuel?” While I’m anxious to find out, there is one thing I do know about the process that sort of makes trying it a win either way: If I screw it up (by adding too much water to the lye-and- vegetable-oil mixture), I’ll definitely end up with enough liquid soap to keep stuff clean for a long, long time.