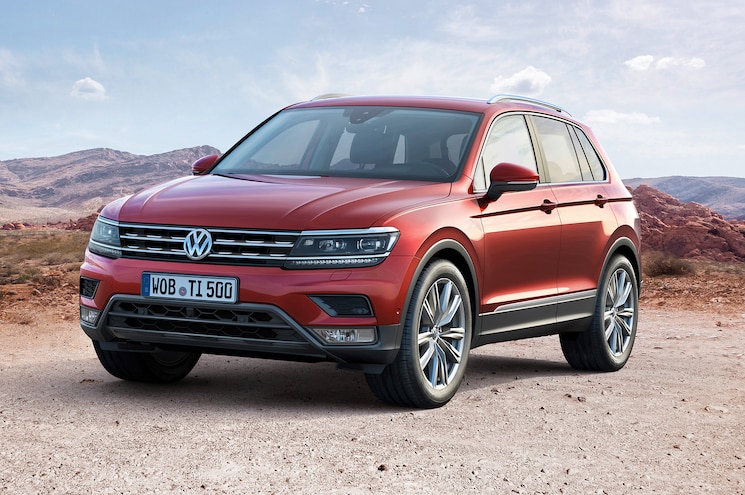 The compact crossover segment is the largest-volume SUV category in the U.S. by far. For some brands, their C-segment crossover offering has become among their top three sellers. The Honda CR-V, Ford Escape, and Nissan Rogue are significant high-volume sellers for their respective brands. However, having a product offering in the category is not an automatic guarantee of success. Case in point is the Volkswagen Tiguan. Although close in size to the above-mentioned models, the Tiguan’s slightly higher price point, as well as poorer fuel economy, limited its appeal to practicality-minded crossover buyers.
Give Us More
Volkswagen is determined to make the Tiguan a contender among compact crossover shoppers with the all-new MQB-based Tiguan, which will go on sale later in 2016 as a 2017 model for North America. Key to succeeding in the land of “more is better” is more of everything that matters to buyers in the class. To that end, the new Tiguan is 2.4 inches longer, riding on a 3-inch-longer wheelbase, 1.2 inches wider, and 1.3 inches lower. Cargo capacity has increased 1.8 cubic feet with the rear seats up to 18.4 cubic feet. Sliding the rear seat forward nets a capacity of 21.7 cubic feet and 58.5 cubic feet with the rear seats folded. The one measurement where the new Tiguan is less than its predecessor is drag. The coefficient of drag decreases to a surprisingly slick (for a crossover) 0.31 Cd.
TDI Torque
The Tiguan has always been offered with a variety of engines in Europe, but for the U.S. market it has soldiered along with a single engine option: the 2.0L TSI turbo, making 200 hp and 207 lb-ft of torque, mated to a six-speed conventional automatic. While the U.S. still probably won’t receive the full gamut of powertrains Europe will, there’s a chance we’ll finally get a TDI option stateside. And if it’s the top-of-the-line TDI offered in Europe, it’ll be a doozy. A beefy 237 hp and stonking 369 lb-ft of torque. However, tempering our enthusiasm, the more likely option will be the slightly lower-output engine making 187 hp and 295 lb-ft of torque. Still plenty respectable for a cute ute. The most likely standard mill for the U.S. market will be a 2.0L TSI gasoline turbo with either 178 or 217 hp. Maximum towing capacity for the Euro-spec Tiguan is now a surprising 5,512 pounds, significantly higher than the class-typical capacity of 1,500 to 3,500 pounds. However, it’s important to note the differences of the U.S. and Euro-spec models. Max towing capacity for the current U.S.-spec Tiguan was 2,200 pounds. The European model equipped with the TDI had a maximum of 4,400 pounds, representing a smaller, but still significant increase.
We’ve never thought of the Tiguan as much of an off-roader, but for the more adventurous, VW is offering a special front end package that increases approach angle from 18.3 to 25.6 degrees. Ground clearance on 4Motion models is now 7.9 inches, up 0.4 from its predecessor. Typical for the Tiguan’s class, the all-wheel-drive system does not have a geared low range, a feature that is exclusive to the Jeep Cherokee.
Safety First
Safety is a big deal among buyers in this class, and VW packed the new Tiguan with plenty of safety features for both occupants and pedestrians. Trendline and higher models feature city emergency braking and pedestrian monitoring, with the top Highline trim getting adaptive cruise control. A feature that may or may not make it to the U.S. market, due to differing regulatory standards, is a pyrotechnically activated hood, which raises the hood in the event of a pedestrian or cyclist collision and provides a cushion between the hard engine, as well as reducing the severity of head injuries. 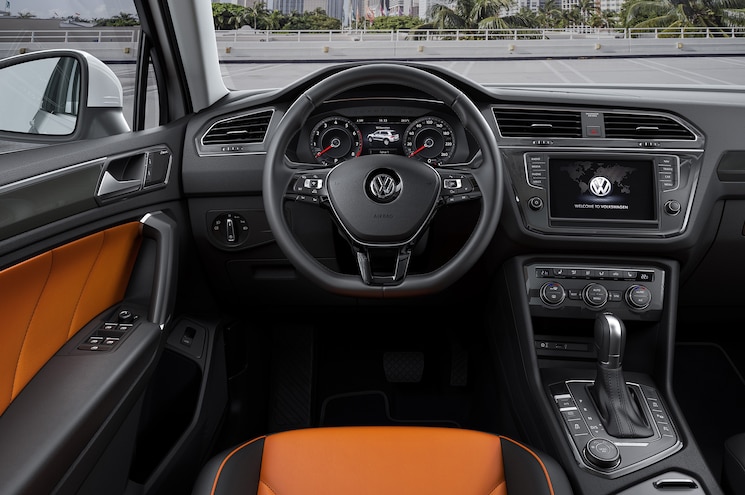 View Photo Gallery | 14 Photos
Photo 2/14   |   Euro Market Volkswagen Tiguan R Line Front Interior
On the inside, the new Tiguan gets a 12.3-inch fully digital, configurable instrument cluster, and an available heads-up display. Depending on trim, the new Tiguan gets a 5- or 8-inch center touchscreen display and second-generation modular infotainment matrix (MIB II) integration. That gives the Tiguan the capability of running MirrorLink, Apple CarPlay, or Google Android Auto. Volkswagen is also launching its OnStar-like Security & Service system. Owners will be able to contact a central call center to request roadside service, schedule service, and check their vehicle’s location, maintenance status, or even activate the heater from their smartphone.
Electrified Future
Volkswagen additionally showed off the Tiguan GTE plug-in hybrid concept in Frankfurt, with a combined system power of 215 hp and combined fuel consumption in the European fuel economy test of 123.8 MPGe. The Tiguan GTE also has an all-electric range of up to 31 miles. VW claims a 0-60 time for the Tiguan GTE of around 8 seconds flat.
The 2017 Tiguan will go on sale in Europe in April 2016 and is expected to arrive in the U.S. in summer or fall of 2016. U.S. models may come from Volkswagen’s Puebla, Mexico plant.