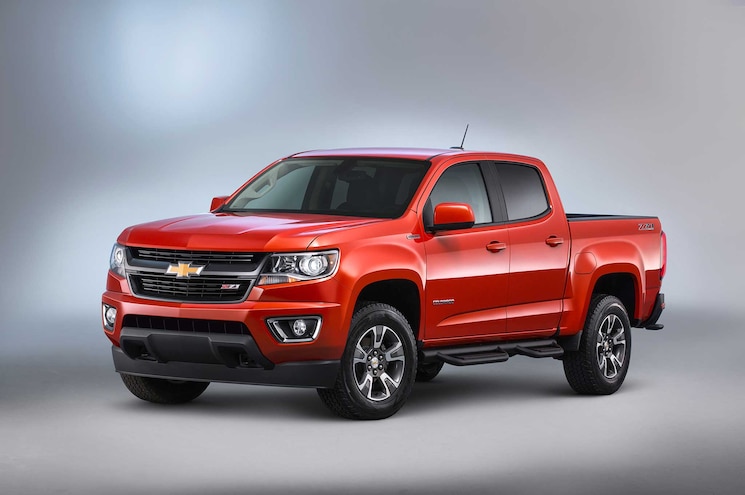 It’s certainly been one of the most anticipated new models around the Truck Trend offices, and based on feedback we’ve received on social media and emails from readers, it’s highly anticipated among potential truck buyers as well. We’ve dug up seven interesting factoids about the 2016 Colorado diesel for your consideration and pondering.
1) Diesel Engine Part of Original Plan
Many of you have probably noticed how low the DEF tank hangs on the 2011-current Silverado and Sierra HD models. It’s frankly an off-road hazard and has resulted in a cottage industry of aftermarket companies making metal cages and skidplates to protect it. No such measures will be necessary for the new Colorado diesel. The truck was planned from the outset for the diesel, so the DEF tank is tucked up and out of the way, making the diesel Colorado just as off-road worthy as its gas-powered siblings. 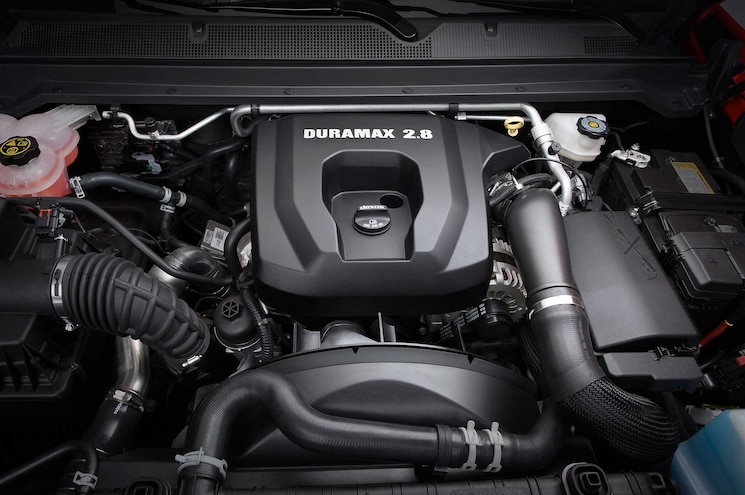 View Photo Gallery | 6 Photos
Photo 2/6   |   Colorado Canyon Diesel Duramax Turbodiesel
2) Different Front Spring Rates
Diesel engines are heavy. They need to be to stand the violent, sudden combustion that is their namesake. Although the 2.8L Duramax is smaller displacement and fewer cylinders than the 3.6L V-6, it weighs 200 pounds more than that engine and a whopping 400 pounds more than the 2.5L I-4. To help give the diesel comparable ride quality and handling to the gas model, front spring rates were revised to cope with the added weight. While it probably wouldn’t be our first choice for autocross, we can assure you the nimbleness and relative flingability on back roads that we enjoyed with the V-6 Colorado is intact in the diesel model.
3) GM’s Cleanest Diesel Truck Ever
The timing in the wake of the Volkswagen TDI emissions scandal could not be more awkward for the Colorado diesel. However, General Motors is confident the Colorado and Canyon diesel will pass the EPA and CARB emissions tests with flying colors, both in the dyno lab, as well as on the road. At the truck’s introduction, it was noted several times by GM representatives that the Colorado diesel was the “cleanest GM diesel truck ever.” That makes sense when you consider HD trucks are held to a less stringent (though still strict) emissions standard.
4) No Muffler
The Colorado and Canyon have no muffler in the formal sense. Now before you get excited about “rolling coal” with your straight-pipe exhaust, there are plenty of other stops along the way between the exhaust manifold and Venturi tailpipe. There’s the diesel catalyst, the diesel particulate filter, and the selective catalyst reduction (SCR) system to make sure you’ll get nary a whiff of acrid diesel exhaust, a puff of black smoke, and minimal NOx emissions. All those systems together collectively muffle the exhaust to the point where additional sound deadening was deemed unnecessary. 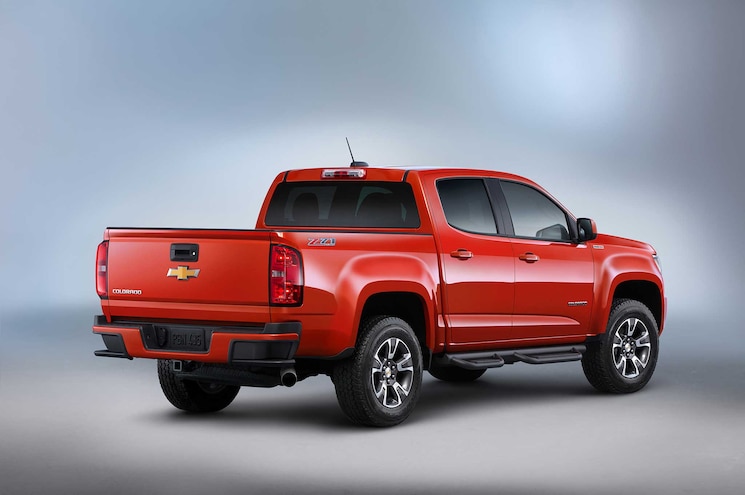 View Photo Gallery | 6 Photos
Photo 3/6   |   2016 Colorado Canyon Passenger Side Front View
5) Only Colorado With Automatic 4WD Function
On 4WD models, the Colorado diesel is the only model available with an automatic 4WD function. In non-diesel Colorado 4x4 models, there’s 2-Hi, 4-Hi, and 4-Lo. On the diesel, if you leave the selector in “Auto” it will engage 4WD as necessary as traction needs demand it. There is a slight fuel economy penalty to the Auto mode, so on sunny days driving around, 2-Hi will get you the best mpg. 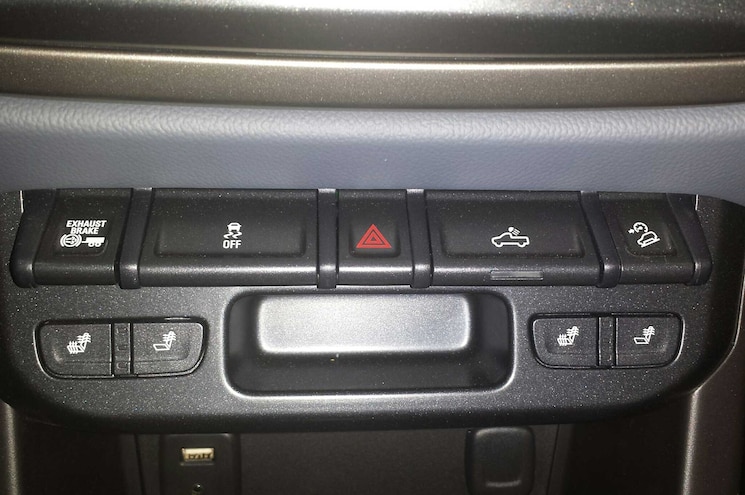 View Photo Gallery | 6 Photos
Photo 4/6   |   2016 Colorado Canyon Diesel Exhaust Brake
6) Only Midsize Truck with Integrated Trailer Brake & Exhaust Brake
Being a diesel, the Colorado Duramax is more oriented toward work than its gas-powered stablemates, with a 700-pound higher towing capacity. To help manage that higher trailer load, the truck is equipped with an integrated trailer brake, which is, as far as we know, a factory exclusive in the midsize market, as well as an exhaust brake. 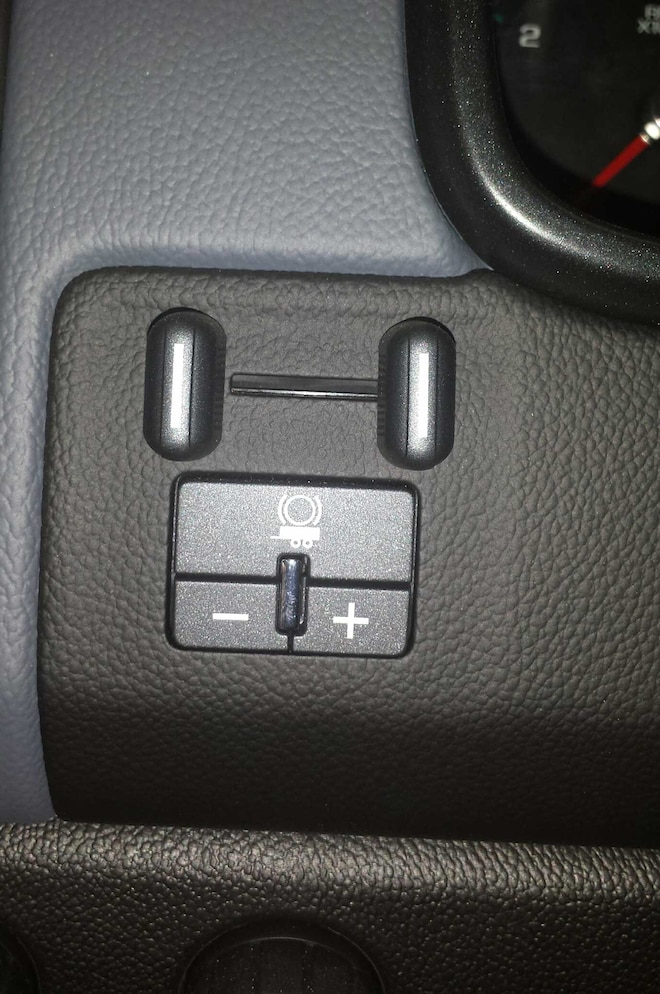 View Photo Gallery | 6 Photos
Photo 5/6   |   2016 Colorado Canyon Diesel Trailer Brake Controller
7) Only Midsize Truck with Centrifugal Torque Converter Dampener
GM was especially proud of the centrifugal torque converter dampener on the Colorado diesel for the added refinement it adds to the driving experience of the truck. Sourced from German supplier LuK, the dampener increases its vibration-canceling effect as revs increase, helping to reduce vibration throughout the engine’s operating range, not only a fixed range, as most static vibration attenuation devices do. This is not the first automotive application of this technology, having been used on high-end luxury diesel models in Europe, but it is certainly the first for a midsize truck in the U.S. 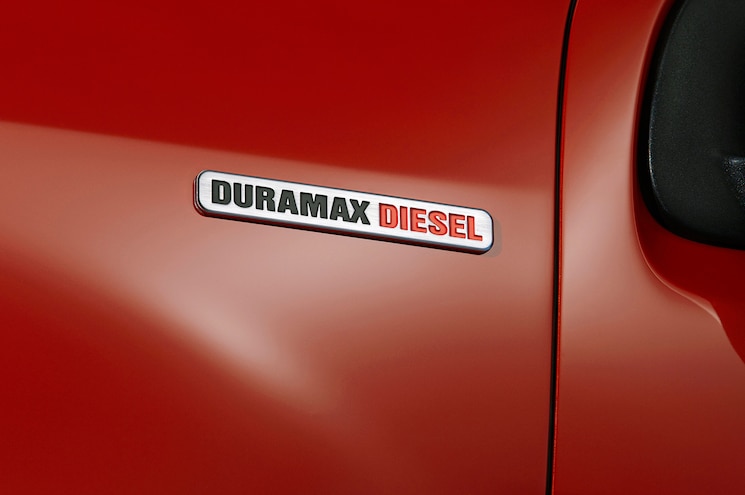