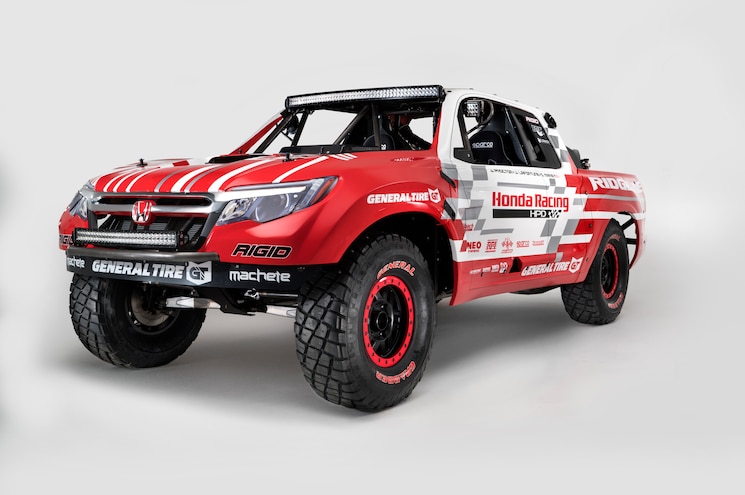 As promised, Honda has shown off a Ridgeline concept at the 2015 SEMA Show that the company claims is a fairly accurate representation of the styling of the next-generation 2017 Ridgeline pickup. However, the truck is more than a mere styling exercise. The truck will actually compete in the SCORE Baja 1000 race later this month. Although the general styling is shared with the production truck, little else will be shared, with the race truck featuring a full custom tube-frame chassis, twin-turbocharged Honda Performance Development 550hp 3.5L V-6 engine, and custom long-travel suspension.
Honda promises the next-generation Ridgeline will be introduced in the first half of 2016. We’re expecting the debut of the production model at the 2016 Detroit Auto Show, with sales starting summer or fall of 2016. As hinted at by the race truck concept, the nose of the new Ridgeline borrows heavily from the Pilot midsize SUV, while the bed profile is a more traditional horizontal plane, rather than the outgoing Ridgeline’s slanted bedsides. The rear part of the cab appears to be slightly proportionally smaller than the outgoing models; however, no official dimensions have yet been released on the new Ridgeline.
Honda’s history of competing in Baja is long, dominated primarily by motorcycle racing, with a total of 17 victories. A Ridgeline also competed in the 2008 race and won its class.
Source: Honda