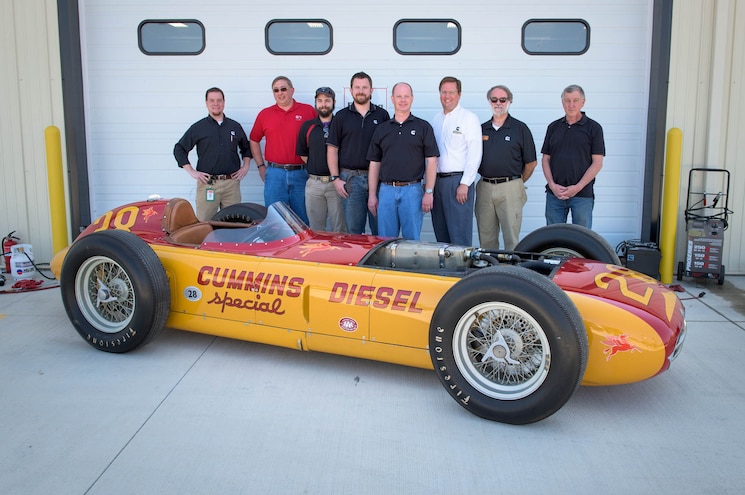 One of the most significant engines in the history of the Indianapolis 500 was given a second chance at life this week. Historians and engineers from Cummins, Inc. were given access to the famed 1952 Diesel Special racer, starting its engine for the first time since 1999 in preparation for this year’s Indy 500 on Sunday.
The 1952 Diesel Special was the fifth Cummins-powered entry to one of the world’s most famous auto races. Powered by a 401c.i. Model J I-6 engine, it produced 430 hp thanks to an Indy-first turbocharged induction system (pictured below). In fact, another turbo engine wouldn’t show up at the Brickyard until 1966, attached to a gas Offenhauser engine. 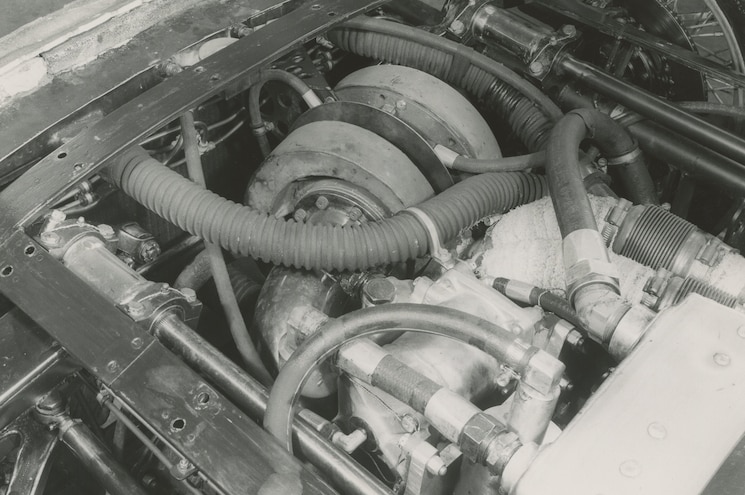 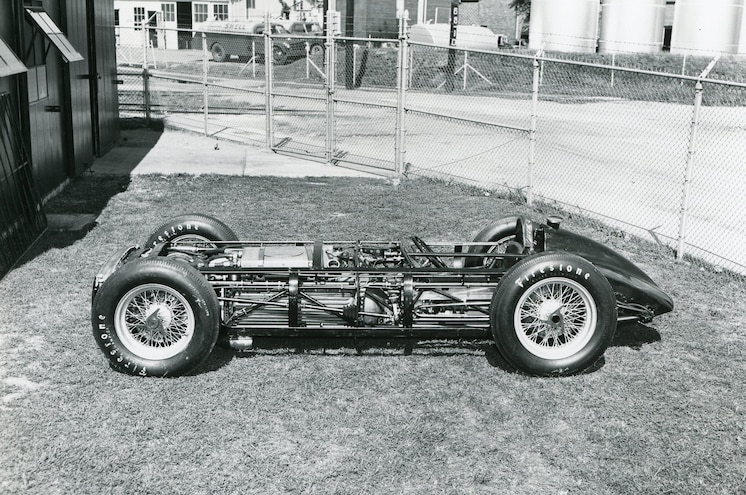 View Photo Gallery | 26 Photos
Photo 3/26   |   1952 Cummins Diesel Special Framework
Modified to lie flat in the Diesel Special’s chassis, the roadster was exceptionally low and aerodynamic, and Cummins claims the Diesel Special was the first Indy racer tested in a wind tunnel for aerodynamic design. It also used the first application of Cummins’ proprietary pressure-time fuel system to meter diesel injection for good performance.
Its engineering chops led to an amazing Indianapolis showing. Driven by Freddie Agabashian, the #28 Diesel Special ran a 138.01-mph qualifier, good for the race’s pole position. The only diesel vehicle to start in first place at Indy, the Diesel Special broke first-lap and fourth-lap records and completed 180 miles of the race at an average speed of 131.5 mph until a piece of debris clogged the turbocharger and retired the vehicle. 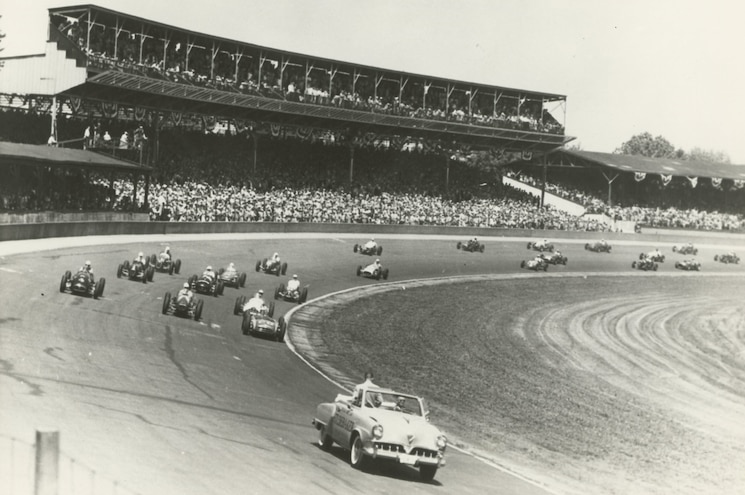 View Photo Gallery | 26 Photos
Photo 4/26   |   1952 Cummins Diesel Special Pace Lap
Decades of exhibition drives followed, with Cummins keen to show off its most accomplished Indianapolis racer at every opportunity. But after running in the 1999 Goodwood Festival of Speed on a bad clutch, Cummins mothballed the car in a display case. But a few years ago, Cummins employee Bruce Watson moved it to the company’s History and Restoration Center for comprehensive mechanical refreshment. Watson was also instrumental in recovering the historic 1939 Cummins Model HB from a field in South Dakota, with both artifacts intended to help the company celebrate its 100th anniversary in 2019.
The Diesel Special’s mechanical restoration comprised setting valve lash and injector preloading, remanufacturing bespoke brake pistons for each of the car’s twin-caliper disc brakes, reverse-engineering magnesium engine bits, and rebuilding the engine’s lubrication system. The horizontal orientation of the diesel required a scavenge-style dry-sump oil system that requires pneumatic pre-lubing, which the team was able to accomplish. After cranking the engine, oil pressure was measured well within spec. Remarkably, the fuel injectors and fuel pump needed no refurbishment, and the fuel system’s soft lines were all that needed replacing to bring the engine to life. 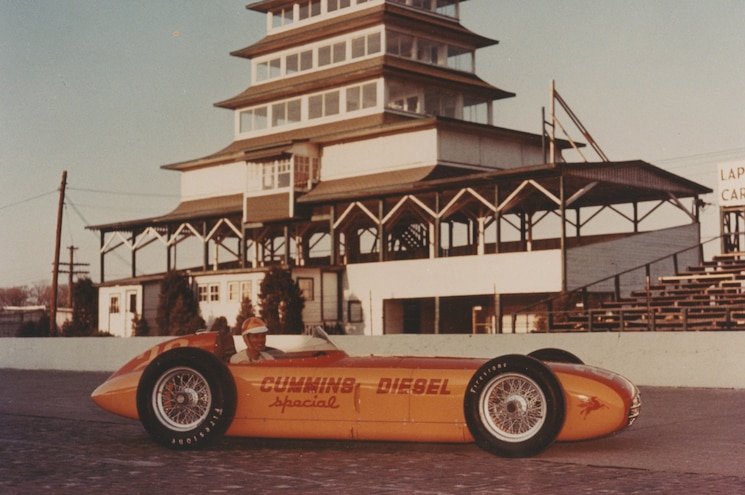 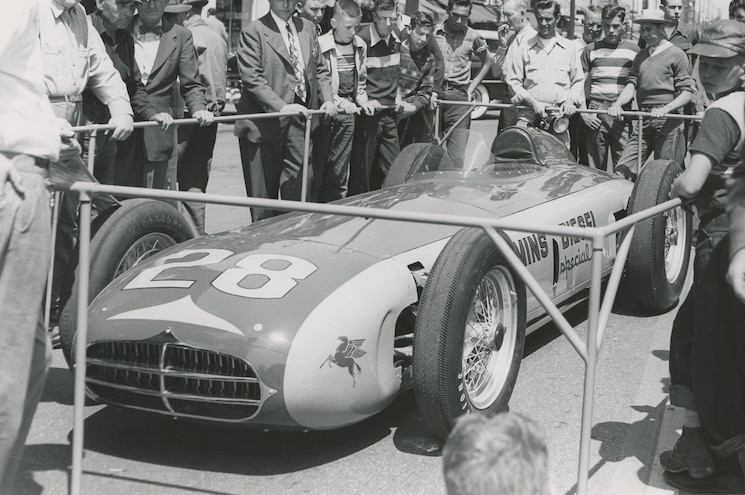 View Photo Gallery | 26 Photos
Photo 8/26   |   1952 Cummins Diesel Special 28 Display In Columbus
After adding some stopgaps to prevent a diesel runaway, it was time to start the engine for the first time in 17 years. With just a few seconds of cranking and a slight wisp of black smoke, the old diesel roared to life with an idle lope appropriate for a classic American racing engine. With new tires and a clutch, it will be once again ready to hit the bricks, educating another generation of Indianapolis 500 fans on the virtues and challenges of American diesel engineering.
Sources: Cummins and Hot Rod
Images and Video: Courtesy of Cummins, Inc. Archive 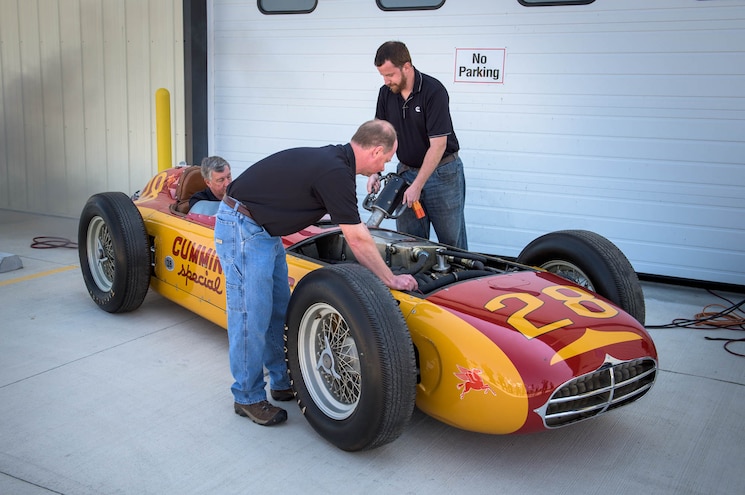