Desperate for Destruction: The Calming Effect of Mayhem 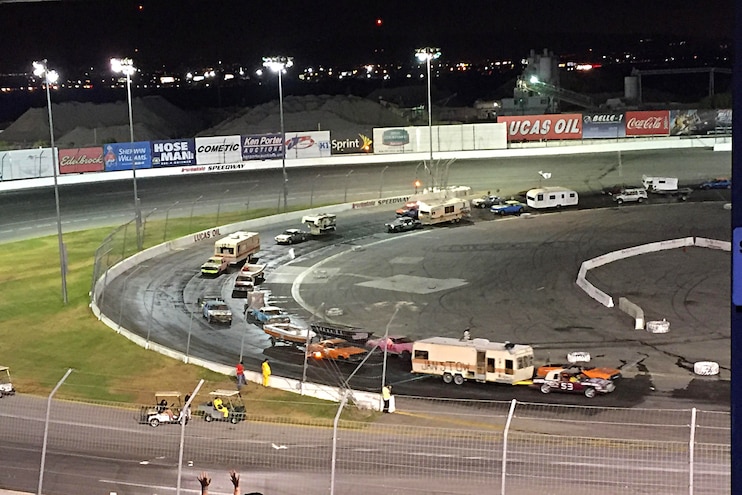 The crowd erupted as the metal-on-metal sound of a front-end collision vibrated throughout the stadium grandstands. You see, a four-on-four-car soccer match had managed to make an otherwise extremely boring sport entertaining. Then came figure eight racing, followed by skidplate racing. The finale of the night was trailer racing, which elevated the carnage level to maximum. As if all that were not enough, fireworks closed out the night, momentarily lighting up the smoking, smelling pile of shattered fiberglass, twisted metal, and smashed wood that had been the night's entertainment. As we left the stadium, my three-year-old nephew wondered who was going to clean up the giant piles of rubble scattered across the infield. Good question, my friend. Good question. This was the first Night of Destruction I had ever been to, and it was epic.
I was not the only one who had a blast at the night’s event at Irwindale Speedway near Los Angeles, California. While we were there, they announced it was the biggest crowd the stadium had seen in five years, and as the general admission grandstands overflowed into standing room only, I tended to believe it. The line of cars to get in to the parking lot had backed up well onto the freeway and took about an hour. In fact, it was a sellout event that caught even the regulars off-guard. Alas, there remains a reassuring spirit of mischief within at least 6,500 of us destruction-goers.
What’s wrong with me? What's wrong with us? Are we that pent up and stressed out that stuff going smash, bang, crunch is like the most amazing thing ever? Have we become so fed up with ridiculous ticket prices and ticket fees that $10 tickets to a night of pandemonium were just too good to pass up? Is our overregulated society subtly craving chaos and danger? Are we all like little kids playing recklessly with toy cars, never outgrowing some natural affinity for things that run into each other? Do we enjoy the wretched smell of fried clutch, transmission, and rubber that make our eyes water and our throats burn? Do we see something glorious in the blue and gray smoke and dust and debris projected hundreds of feet in the air?
What’s wrong with those down there driving vehicles of mayhem? In my aging, maturing estimation, slamming thousands of pounds of vehicles, trailers, and things loaded on trailers together was actually pretty dangerous. Barely avoiding T-bone collisions lap after lap was risky business as well, as was sliding around wildly on skidplates instead of wheels. And all of this was on purpose—done playfully, joyfully, and deliberately. Some of the hard hits made me wonder why they let this fly, period, especially in California. Despite the rules I'm sure every driver kind of followed, you could actually get hurt, you know, which is a no-no in 2016. Easing my perplexed mind were a few red flags in which the cop car referee would literally nudge the side of a car, seemingly saying, “Hey driver, you alive in there? Wake up! I'm gonna rotate you so you don't get T-boned as hard. OK, game on!”
Finally, what's wrong with him? Midway through, my husband turns to me and gleefully says, "I see no good reason why we shouldn't be doing this." And he meant it. Maybe, just maybe, he’s onto something.
- Monica
By Monica Gonderman
634 Articles