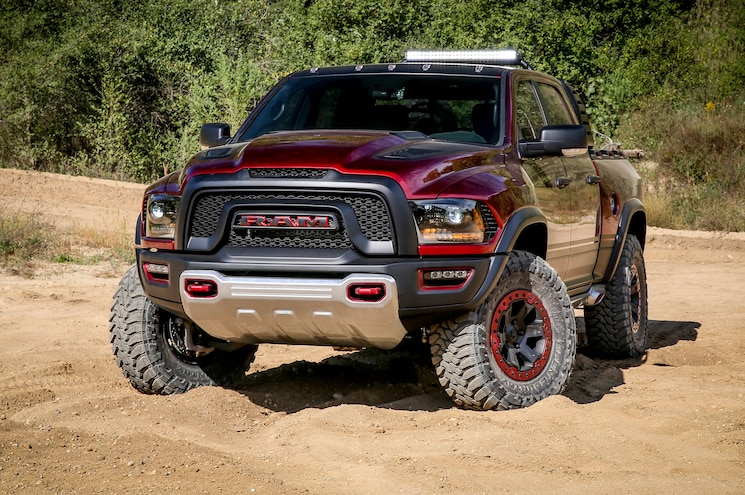 Keen on establishing itself as the off-road leader for fullsize trucks, Ram unleashed the Rebel TRX concept on unsuspecting folks at the State Fair of Texas. The widebody pickup, based on the Ram 1500 Rebel, adds a stupendous amount of power and off-road capability to what is already a very competent truck. 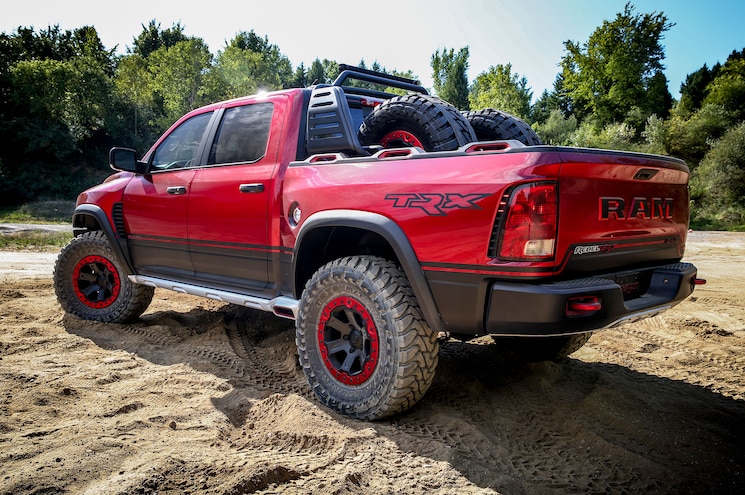 View Photo Gallery | 24 Photos
Photo 2/24   |   Ram Rebel Trx Concept Rear Three Quarter 01
The most obvious changes made to the pickup are the massive, blistered fender flares that hide a 6-inch–wider track than the standard Ram 1500. Sitting under those flares are aggressive 37-inch tires stretched over 18-inch wheels with red anodized beadlocks. The tires, Toyo Open Country M/Ts, are some of the most capable meats in the off-road world, and it signifies the second such partnership between the tire company and Ram’s Rebel lineup. 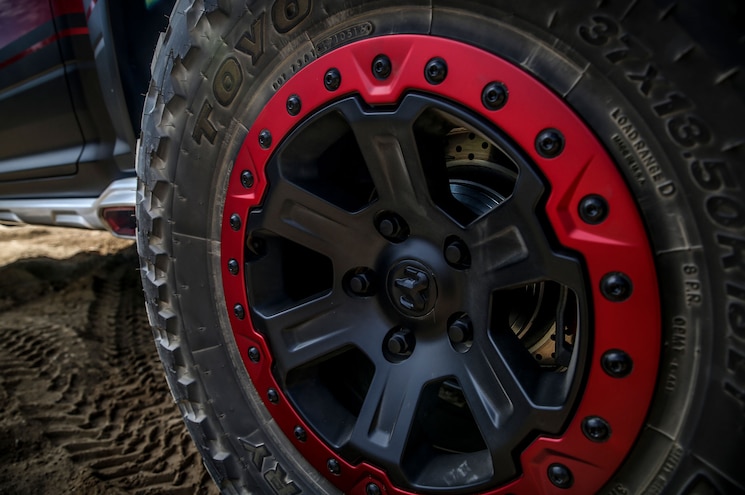 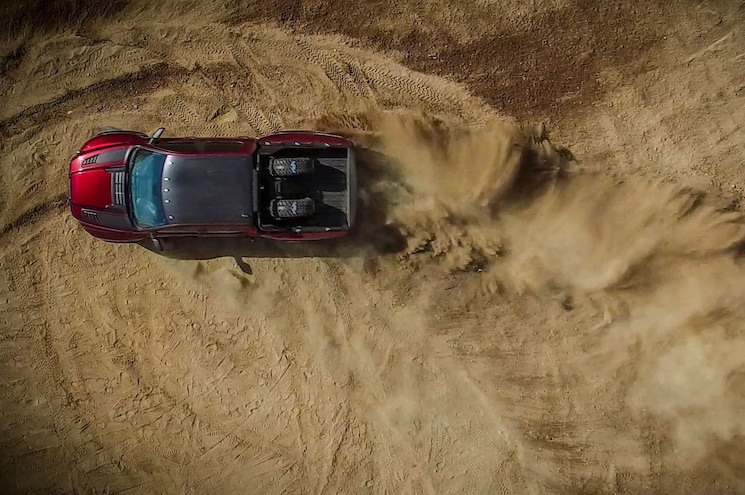 View Photo Gallery | 24 Photos
Photo 4/24   |   Ram Rebel Trx Concept Off Road Overhead Fishtail 02
Sitting between the front tires is a standard Ram 1500 front axle with an open differential, while custom CV halfshafts provide added width. Out back, a Dynatrac Pro 60 axle and electric locking differential put power to the ground, with the locker providing equal traction to both wheels at any speed. Traction is further enhanced with the Ram 4x4 Performance Control system, a terrain-management setup with Normal, Wet/Snow, Off-road, and Baja operating modes. That locker works in each setting, by the way, so two-wheel-drive drifting on dry pavement is a distinct possibility.

Ram Trucks just pulled the wraps off of the insane off-road racing inspired Ram 1500 Rebel TRX concept and special Texas-only Lone Star Silver Edition at the 2017 State Fair of Texas. Join us as we talk to Jim Morrison and the boys from Ram to learn all about these fantastic pickups! #GutsGloryRam #StateFairofTX #RamRebelTRX

Further enabling such hoonery is an unreal powerplant, a 6.2L supercharged Hemi V-8 putting out 575 horses. That’s more power than any Ram 1500 ever built, including the SRT-10 sport truck from the last decade. In fact, we think it might be the most powerful Ram pickup in history, full stop. Interestingly, the engine shares its displacement and induction with Dodge’s lineup of Hellcat motors, yet Ram doesn’t mention the connection in its press release. Could the division be saving the words “Hellcat” for an even more powerful Ram pickup, possibly with up to 700 horses under the hood? Mind-boggling. 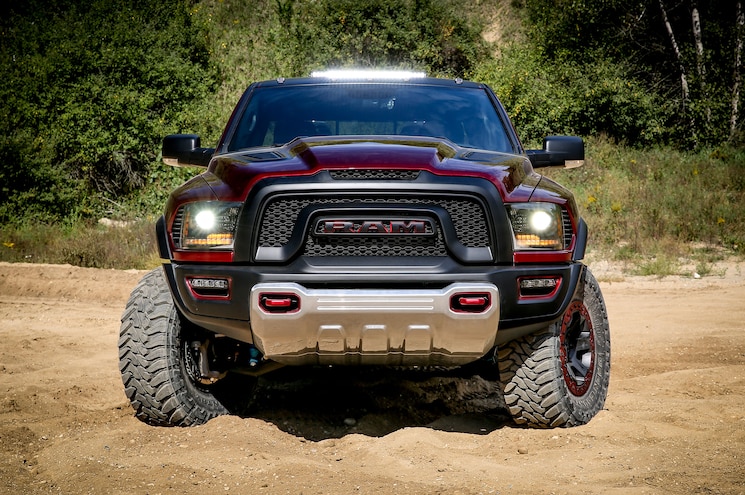 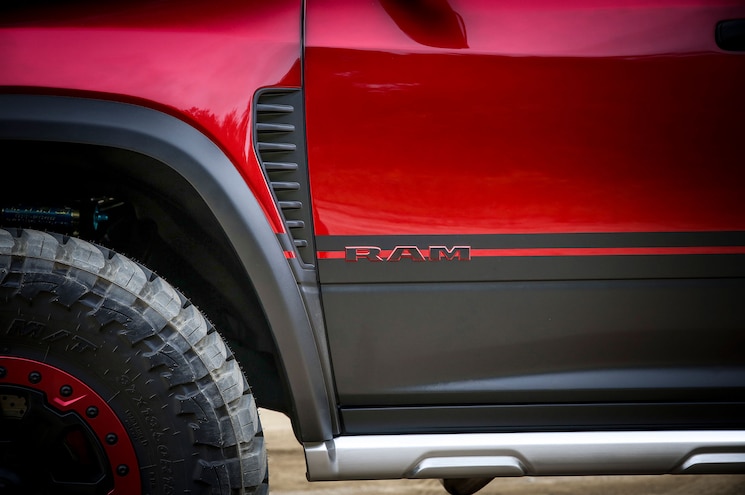 View Photo Gallery | 24 Photos
Photo 6/24   |   Ram Rebel Trx Concept Side Graphics
Stylistically, the Rebel TRX concept is a mix of Ram design cues. An obvious family resemblance to the Rebel and Power Wagon rests up front, where bold “RAM” lettering adorns the grille. Furthermore, the Rebel TRX uses the taller fenders and hood of the Ram Heavy Duty to provide clearance for the supercharged engine. A lower brush guard up front helps prevent damage from rocks, animals, and other hazards. 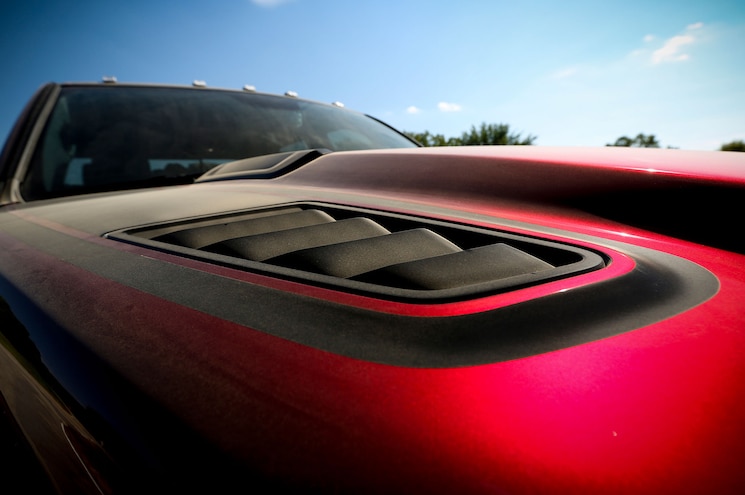 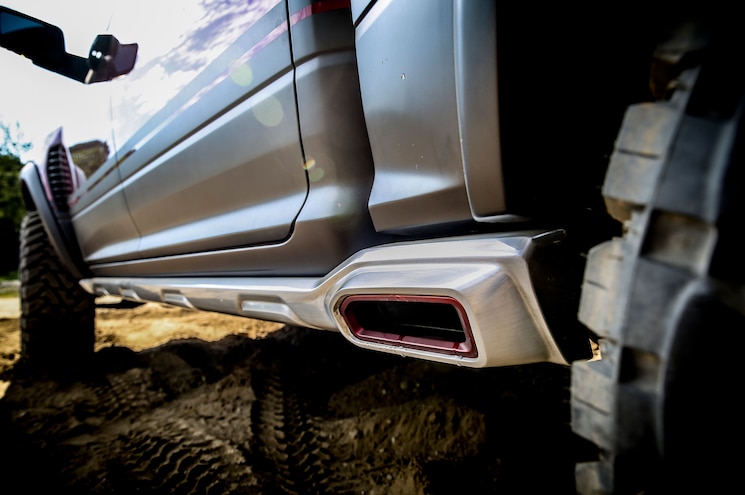 View Photo Gallery | 24 Photos
Photo 8/24   |   Ram Rebel Trx Concept Side Exit Exhaust
Inside, suede and mesh seating keeps occupants firmly in place during aggressive maneuvers off-road, and the front seats look as bolstered as those you’d find in an SRT-branded product. All four seats feature six-point harnesses for safety. The center console is trimmed in the same black suede as the seat accents, featuring the same “Header Red” stitching. Nylon straps replace interior door handles, a neat touch that adds even more flair to the truck’s interior. A TRX-labeled bag replaces the Ram’s upper glovebox, holding some of the tools one might need for a day of playing in the sand. 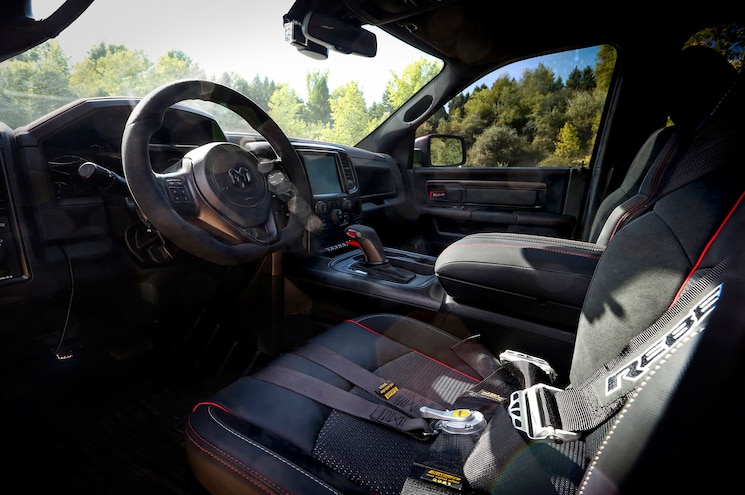 View Photo Gallery | 24 Photos
Photo 9/24   |   Ram Rebel Trx Concept Interior Dashboard
With 13 inches of front and rear suspension travel and nearly 600 hp, might the Ram Rebel TRX concept presage a future Ford F-150 Raptor fighter from the company? The Raptor holds a slight edge in rear suspension travel (at 13.9), and it’s probably significantly lighter than the TRX, but Ram’s concept features even more power than the already stupendous 2017 Raptor. We’ve no idea if it’s being considered for production, but for all of our sakes, we hope it is.
See it at the State Fair of Texas, and let us know what you think when you do.
Source: Ram Trucks