At the wheel of the Ram SRT-10, searching for BBQ 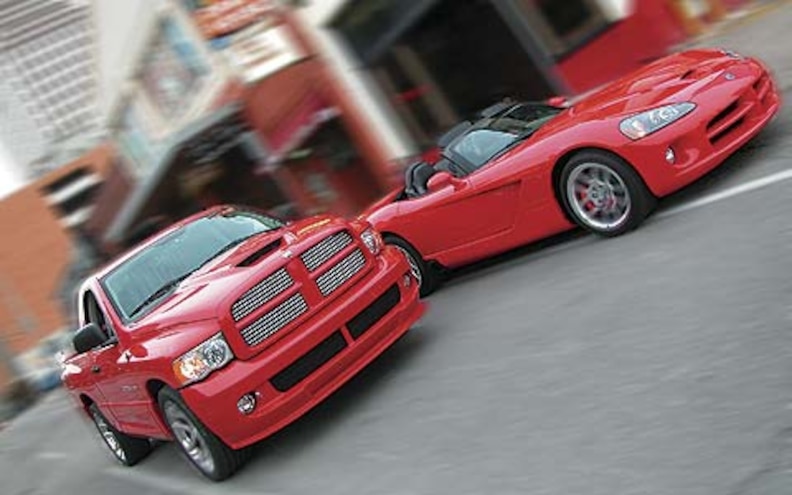 View Photo Gallery | 9 Photos
Photo 2/9   |   2005 Dodge Ram Srt 10 Pickup Viper Convertible front Right
When it comes to BBQ, no region of the United States takes this heated subject more seriously than central Texas. Within the three points of Dallas, Luling, and Llano, you can find some of the most succulent barbecue in the U.S.
Although eating meat for breakfast, lunch, and dinner isn't everyone's lifelong dream, we couldn't pass up the chance when DaimlerChrysler's Dodge division offered us the world's fastest pickup, the 500-horsepower 2004 Ram SRT-10, to drive the "BBQ Triangle"--it was a sauce- and smoke-fueled excuse to sample all variations of the classic Texas-style way of cooking. 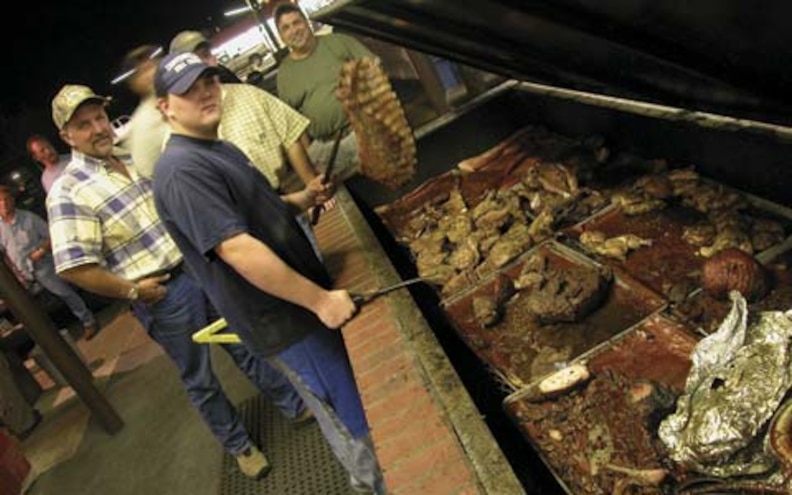 View Photo Gallery | 9 Photos
Photo 3/9   |   163 0412 Bbq02 Z
Day1: Austin to San Antonio via Taylor, Lockhart, and Luling
Because of the complex nature of this trip, we invited some friends along to help out--we'd have custody not only of the Ram SRT-10, but a Viper SRT-10 as well, and with two vehicles, we'd need three drivers. Taking the time to help were local automotive author and editor Steve Statham, and Matt Malone, part of the marketing group at Boston Acoustics.

While we could've saved time driving to Taylor, northeast of Austin, Steve suggested we visit Elgin for a quick sausage snack at Southside Market. Steve, who also judges BBQ contests in his spare time, told me Southside Market was acclaimed throughout Texas as having some of the very best hot links. He was right.

View Photo Gallery | 9 Photos
Photo 4/9   |   163 0412 Bbq05 Z
We then drove north to Louie Mueller's in Taylor. We've heard that unless the interior walls of a BBQ joint are stained with smoky patina, chances are it's just not the real thing. When we stepped inside, we knew right away Louie Mueller's is the real deal. The aroma of smoked beef, pork, and chicken will permeate your clothing, and remain there hours after your departure.
Steve told us to concentrate on the beef brisket, which was uniformly excellent and would serve as a benchmark against which later brisket would be measured. The cole slaw, a traditional side dish in this arena, was also top drawer--very sweet, not sour.
We had a lot of ground to cover and proceeded south to Lockhart, home to the second of Texas Monthly's (www.texasmonthly.com) top three BBQ legends, Kreuz Market (pronounced "Kritze's").

What it lacked in an authentic look (such as Mueller's smoky walls), due to a recent move to a more spacious facility, it more than made up for with Texas friendliness as we received the royal treatment from its owner, Rick Schmidt, with a guided tour of the smoking pits. There we sampled smoked prime rib, something not found at many barbecue establishments, in addition to brisket.

View Photo Gallery | 9 Photos
Photo 5/9   |   163 0412 Bbq12 Z
From Lockhart, we continued south to Luling, to City Market. Open for more than 50 years, it features a primitive smoking room at the back of the establishment. The menu is Atkins-friendly: pork chops, salty brisket, coarsely ground sausage, and ribs.
Next, we headed toward San Antonio to Harmon's BBQ, for what turned out to be, even though we were already full, the best chicken on the entire trip. I mentioned to my drive partner that never in the course of human gluttony have so many variations of BBQ been consumed in such a short period of time. He turned to me and smiled.
Day2: San Antonio to Waco via Fredericksburg and Llano
To start day two, we went to Fredericksburg, which is probably the best-known German enclave in Texas. Founded on May 8, 1846, by German immigrants, the city is now a major German-themed tourist attraction.

View Photo Gallery | 9 Photos
Photo 6/9   |   163 0412 Bbq08 Z
Fredericksburg lies 38 miles south of Llano, the last of Texas Monthly's Big Three of Texas BBQs, so we were perfectly positioned for a quick sprint north on TX 16. It was here, with the road clear, that for the first time since leaving Austin, we seriously exercised some of the SRT-10's horsepower. We took full measure of the power of the Viper's V-10 as well.

View Photo Gallery | 9 Photos
Photo 7/9   |   2005 Dodge Ram Srt 10 Pickup front
Arriving in Llano, we sought out Cooper's Old Time Pit Bar-B-Que. As soon as we pulled in the parking lot, we knew we'd arrived at the Holy Grail of Texas BBQ. While our Ram attracted the typical crowds of pickup aficionados, my buddy said, "from the smoky parking lot filled with diesel pickups to the outdoor barbecue pits, Cooper's screams Texas, in a good way." Head outside and walk right up to the pit, where the boys at Cooper's will pop the hood, and you can pick from a wide variety of meat and chicken. You'd think that after eating BBQ for days I was getting tired of it. You're right, but I couldn't stop eating the brisket at Cooper's. It was that good and the clear standout of the trip.
Day3: Waco to Dallas
Since we'd risen at sunrise, we had plenty of time to squeeze in a visit to Sonny Bryan's Smokehouse, a Dallas institution. Not far from Love Field in Dallas, Sonny Bryan's is famous for the travelers who stop by before going to the airport to pick up an order of signature ribs to eat on their flight. Even though we arrived not long after noon, it was closed for the day, as tradition says when they run out of food, there's no more until they open the next morning. Some equally disappointed folks in a Z3 directed us to a second location nearby, just a few miles north.

View Photo Gallery | 9 Photos
Photo 8/9   |   2005 Dodge Ram Srt 10 Pickup front
Sonny Bryan's is classic Texas BBQ distilled into a format that fits in suburban strip malls. At Sonny Bryan's we selected a sampler of chicken, brisket, and ribs with a side order of creamy macaroni and cheese. While very tasty, I must admit my taste buds were numb, especially after the previous night's almost cosmic experience at Cooper's. On my next visit to Dallas, I promised myself a stop at Sonny Bryan's as soon as I landed.

View Photo Gallery | 9 Photos
Photo 9/9   |   163 0412 Bbq10 Z
On the flight home, I opened my laptop and downloaded the last of my photos. Having upgraded to first class, I thought I'd have some privacy, but such was not the case. Sitting next to me was an attractive blonde, I'd say about 30, who seemed quite intent at sneaking a peek at what was on screen. When I pulled up the first of the morning's photos of the Ram at City Garage, she exclaimed with a thick Texas drawl, "That's the new Viper truck. I want one. I have a 2002 Ram Quad Cab." My God! I'm sitting next to a beautiful, pickup-owning Texan Dodge girl for the next three hours. How bad can life be? TT

- OF
By Rich Truesdell
33 Articles