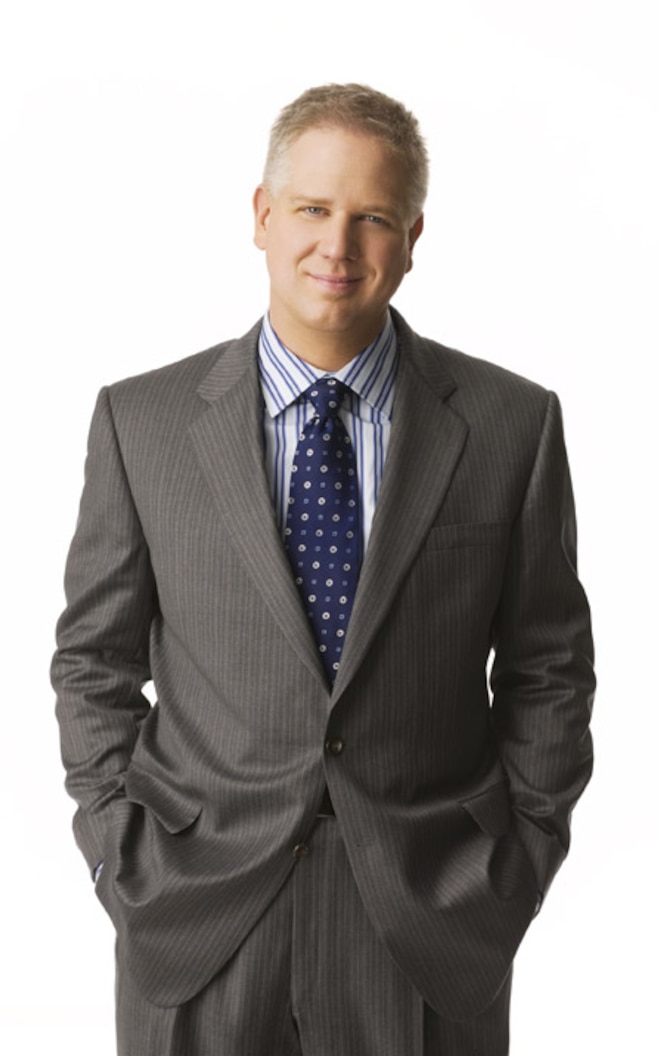 View Photo Gallery | 9 Photos
Photo 2/9   |   glenn Beck
Quick Stats: Glenn Beck Talk show host on Fox News Channel
Daily Driver: 2006 Cadillac Escalade (Glenn's rating: 10 on a scale of 1 to 10)
Other car: 2005 GMC Yukon Denali (rating: 7.5)
Favorite road trip: Across the country
Car he learned to drive in: 1976 Toyota Celica
First car bought: 1969 MG convertible
As the newest face on Fox News Channel's afternoon lineup, talk radio host Glenn Beck is on fire. If you don't recognize him from his old show on Headline News, he's the guy who comes on at 5 p.m. eastern, looks into the camera and sometimes flails his hands for effect or makes funny faces to catch your attention when proving a point.
Beck has the whole hour to dispense his libertarian view of the day's events in his sardonic style and viewers are noticing. In February "Glenn Beck" was the third most watched cable news show after "Hannity" and "The O'Reilly Factor" and Beck only joined on FNC in January. In such a short time, Beck has improved his time slot 100 percent in ratings. 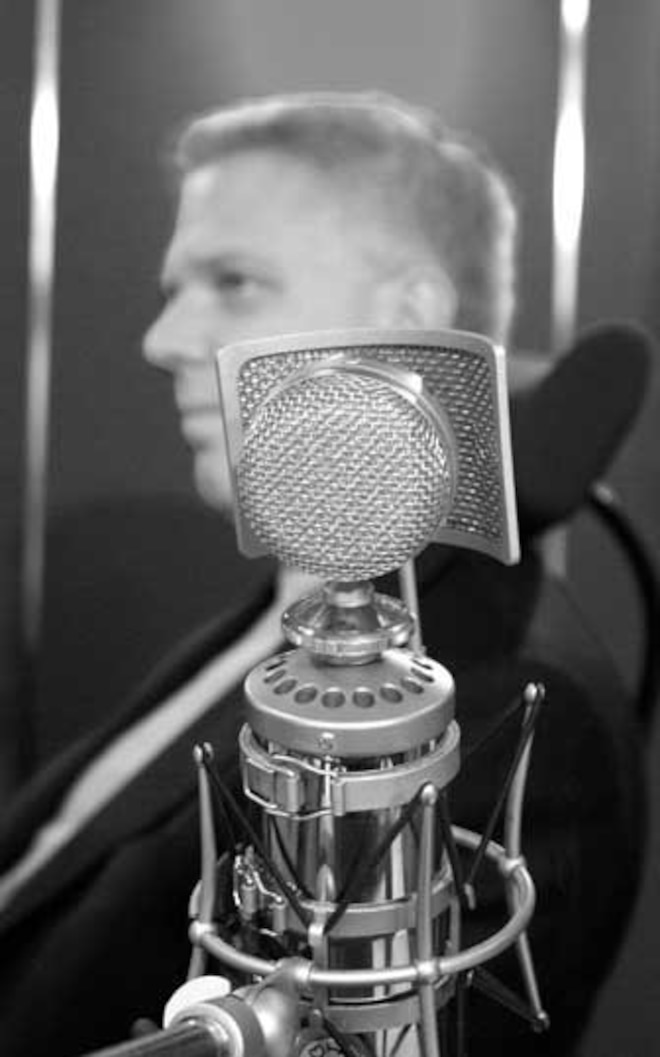 View Photo Gallery | 9 Photos
Photo 3/9   |   glenn Beck
When it comes to car talk, Beck is also in fifth gear with his trademark passion and conviction. Make no mistake, Beck is patriotic and thus he owns American cars. He's since become an ambassador for General Motors, through his radio show. "I had all my GM cars before I was an ambassador for GM," Beck says. "The reason I took them on is because I love them."
He gets the perk of test driving GM cars when he visits Motor City, including a GMC Acadia (which he loved) and a hydrogen fuel cell car, which he drove a few months ago for a whole month. "I loved it!" he exclaims. "It's quiet, it has acceleration like you wouldn't believe. The only problem is -- no hydrogen stations. Shell is working on that, they're partnering with them."
Beck said it's a small little car that "looks pretty gutless" but it's not. "It really has power," he says. "It blew me away. I would buy one in a heartbeat. They want to put it out for $24,000. It's not a Bentley. But for $24,000, it ain't a $24,000 car, I'll tell you that!"
Before he test drove the hydrogen car, Beck had a conversation with execs at GM about their new cars. "I said, 'Really, serious -- what do you have buried in the basement? What about the hydrogen car?' They said, 'Yeah, we've got it, we're working on trying to get the fuel cell.' They got a little testy with me and said, 'Glenn, we can create anything, we can build anything but we need somebody that will give us the policies and then not change them on us once we retool. You tell us what we need to build and we'll build the damn car, we're Americans and we can do it.' I just love that attitude."
Daily Driver
Beck gives his 2006 Cadillac Escalade a perfect 10. "It's smooth, everything just seems to be placed right in it," Beck says. "It's solid. I had a Range Rover before that and I hated that car, it was always in the shop, it was always having trouble. It was the opposite of what I thought a Range Rover would be." 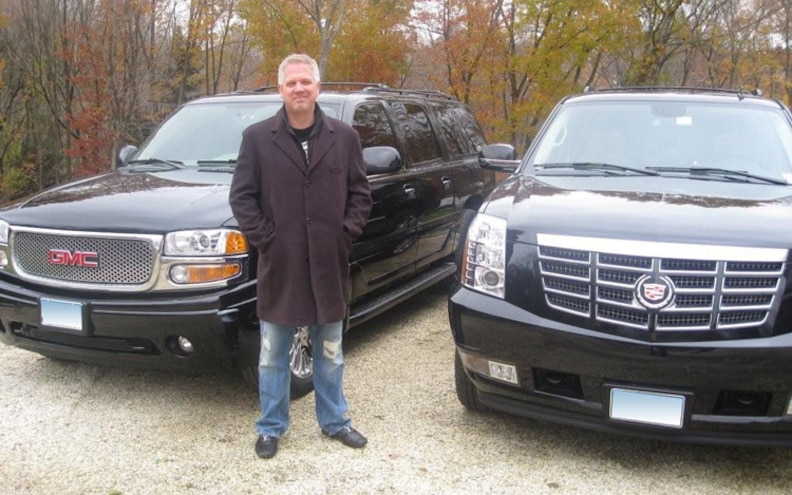 View Photo Gallery | 9 Photos
Photo 4/9   |   glenn Beck with 2006 Cadillac Escalade 2005 GMC Yukon Denali
Beck didn't like the fact he had to treat his 2002 Range Rover gently because it was temperamental. "I remember we had problems with the interior and it just didn't hold up well. I was shocked by it because it did not live up to the reputation."
Beck also drives a 2005 GMC Yukon Denali which he rates a 7.5. "I don't think the seats are quite as comfortable," he observes. "Somebody told me the Denali seats are the same as the Cadillac seats. I don't think they are. It doesn't have some of the nice appointments to it. That's the family car, it's the dog and the car seats and kids and everything else."
His wife drives their newest car, a 2008 Saturn Aura, which is an "about town car" he says, adding that she loves it.

View Photo Gallery | 9 Photos
Photo 5/9   |   glenn Beck
Car he learned to drive in
Beck learned how to drive at 16 in his dad's manual 1976 Toyota Celica in the hills of Seattle. "I remember him taking me to the steepest hills and he's like, 'Listen, if you learn to drive stick shift on the hills in Seattle, you'll never have a problem driving another car ever. It's true! I haven't."
The first day of learning how to drive didn't bode well as he describes as though he were doing standup. "I almost killed like 1400 people that day!" he jests. But he gives his dad credit for teaching him. "Now I get into the car with my children, I can't even get out of the driveway trying to teach them to drive. I'm like, 'Does the school teach driving?' I don't know how my father did it. Oh I just have a heart attack! I'm just doing it without the alcohol. I gave up drinking way too early."
First car bought
Beck bought his first car right after he got his license. He's been on the radio since he was 13 so he saved up enough money to buy an ill-fated, but cool looking used 1969 MG convertible.

View Photo Gallery | 9 Photos
Photo 6/9   |   glenn Beck with Ann Coulter
"I remember it fondly because it broke down on the way home from the dealership," Beck says. "I remember the car dealer saying, 'This is as is' and I just thought it was the coolest car ever. I was like, 'Yeah I know, it runs right?' He was like, 'Yeah, but this as is.' I said, 'Yeah, that's cool!' I got 15 miles from the dealership and it broke down. I had to tow it. I called him and he was like, 'Hey it was as is, kid.'"
Beck then sold the MG to someone else, emphasizing that car was "as is" and he then bought a 1971 Ford Thunderbird.
Beck moved to Connecticut a few years ago from Philadelphia, for his old show on Headline News. He bought a Bentley Continental the first year they came out in 2003. After moving there he promptly sold the Bentley because he hardly drove it.
"If you're going to have a car you've got to drive it," he says. "I rarely drive anymore except to and from work. I didn't want that car sitting there sucking up that much money. But I loved that car."

View Photo Gallery | 9 Photos
Photo 7/9   |   glenn Beck
He said he's never driven a powerful car like that, so now he has his eyes on the soft-top. "I'm glad I got rid of it now because I convinced my wife that I'm buying the soft top," he says. "I bet I could buy them cheap soon. I think they are just so incredibly beautiful. That thing looks like a crouching animal, it looks like it's going to pounce. It taunts you. You get on the highway and you're going 65, 70 miles an hour and its like, 'Come on you wuss. Come on!' Even if you open it up and you're going 90-100 miles an hour, it's still saying, 'Come on, I haven't even started yet!'"
Favorite road trip
Beck loves driving and would do more road trips if he had the time. He's driven across this country three times. "I always wanted to be a truck driver until I realized how much a truck driver's life sucks, I don't know how they do it," he says. "God bless these guys. I love the time of sitting in the car driving and thinking and seeing all the different sites."
Beck loves driving cross country so much that he dreams of one day towing his car behind a big mobile home so he can "drive around and say, 'You know what? Let's just stay here for a while.'"
Some favorite highways are highway 10, the 90 and U.S. Route 40 where it crosses Colorado. He likes all of I-5 and all of I-95. Beck hopes to one day drive all of Highway 101 with a Bentley soft-top.

View Photo Gallery | 9 Photos
Photo 8/9   |   glenn Beck in Studio
Automakers
Beck turns patriotic again when the talk turns to Detroit. "My understanding of American cars and the Big 3 has changed," Beck says. "The parts are made in countries all over the world. The key is the money stays here so the company is American." He added even though Honda has plants here and they hire Americans, money is still shipped offshore to their corporate headquarters.
While he didn't like the concept of a government bailout for U.S. automakers, they are one of our only manufacturers left and it needs to be supported. "We've got to have American industry, to be able to pull us out of things," he says.
Beck also wants to see less dependence on foreign oil. "I want to make sure we're using less oil. I want foreign oil to stop," he says. "I don't buy into this nonsense of the hybrid for corn ethanol. That's insanity -- burn up our food supplies? Synfuels -- absolutely! Hydrogen -- brilliant! Last spring they had these big campaigns, I said to my listeners I'm not going to read these commercials because I don't believe in ethanol, I think it's wrong. All the car companies are doing it because of pressure from the government."

View Photo Gallery | 9 Photos
Photo 9/9   |   glenn Beck
While he would love to see the development of hydrogen cars, Beck worries about the concept gaining acceptance. "I don't hold out a lot of hope for that because environmentalists will say we're using too much water. You have to take water and zap it with electricity and do it at a power plant to make it," he says. "If we all worked together and said, 'let's be reasonable.' You're telling me that without government intervention, we can't solve these problems? Come on, we're Americans!"
Glenn Beck on TV and Radio
Beck's career has taken off. Last year, in addition to his own show at Headline News, he filled in as a guest host for Larry King and he has his successful nationally syndicated radio show airing on more than 300 stations. Not to mention Beck has penned three New York Times best-sellers. In January he moved to the 5 p.m. (EST) time slot with his show "Glenn Beck," on after "Your World with Neil Cavuto" on Fox News Channel, where Beck has finally found a comfortable TV home to showcase his animated and sometimes zany personality.