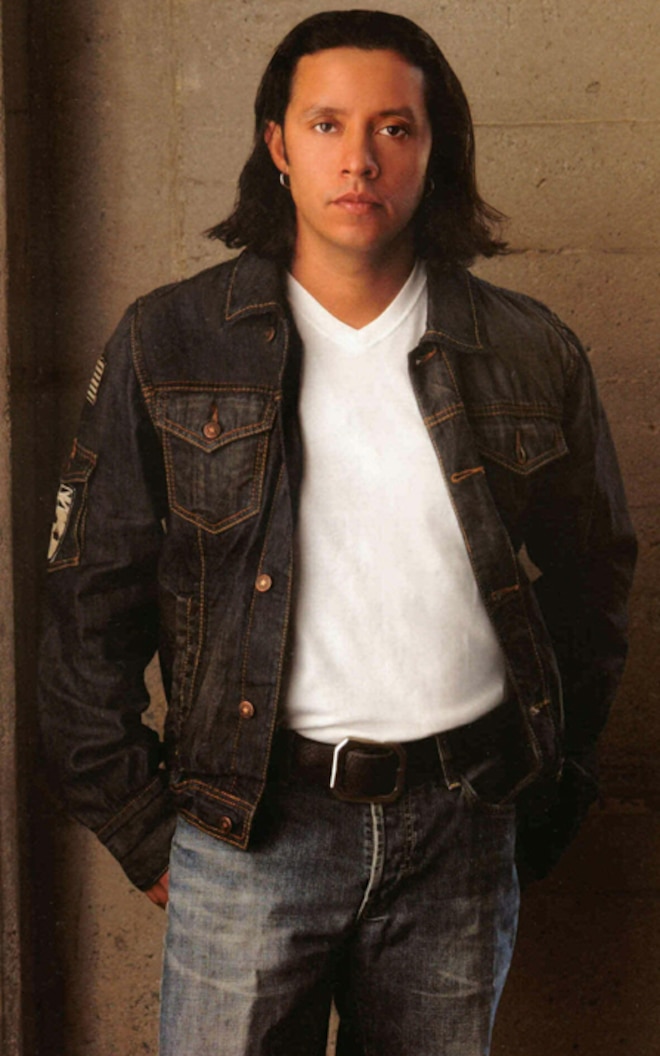 View Photo Gallery | 10 Photos
Photo 2/10   |   efren Ramirez Celeb Drive pose
Quick Stats: Efren Ramirez actor in "Crank: High Voltage"
Daily Driver: 2008 Nissan Xterra (Efren's rating: 10 on a scale of 1 to 10)
Favorite road trip: Los Angeles to Utah
Car he learned to drive in: mid 1980s Ford Escort
First car bought: 1988 Honda Prelude 2.0Si
Efren Ramirez may have played Pedro on "Napoleon Dynamite" and inspired many real life "Vote for Pedro" T-shirts, but years before that breakthrough role, he was living "The Fast and the Furious" in real life on the highways of East Los Angeles.
"The real underground scene was on the freeways and city streets," he says, comparing the movie's desert race scenes to its inner city racing. "While you're racing you have no inclination about cops, you don't think about police officers."
Ramirez was influenced by his older brother Julio, who raced his Honda Accord, which he dropped and added lights that turned red, white, or blue with a flick of a switch. "I was like, 'Dude, that is soo cool,'" he says of his brother's Accord. 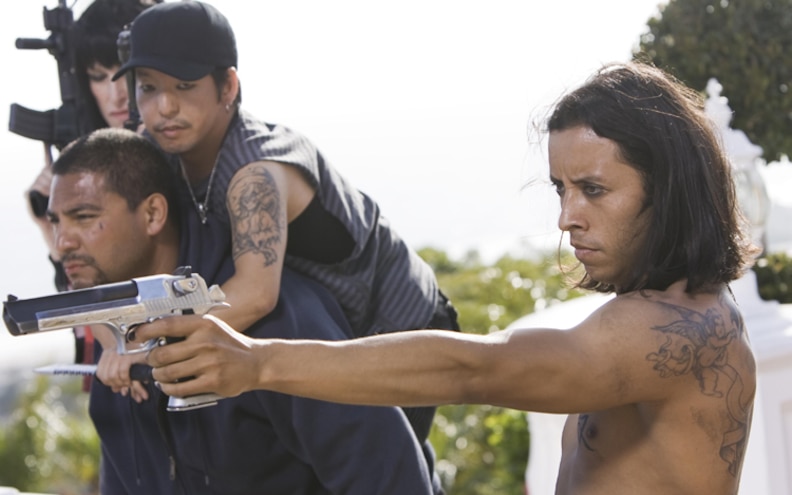 View Photo Gallery | 10 Photos
Photo 3/10   |   efren Ramirez Celeb Drive crank High Voltage Shot
They lived in Highland Park and his brother belonged to an underground race crew that used the 210 Freeway around Pasadena to the 105 Freeway as their racetrack, although they would occasionally go to the desert to race in Palm Springs. The one thing that was off about the pseudo race car was it had an automatic transmission. "All of his friends made fun of him. They'd go, 'Come on, why do you drive an automatic?'"
Car he learned to drive in
At 16, Ramirez learned to drive in his other older brother Eddie's gray mid-80s Ford Escort, which he calls a "Frankenstein car" because it had parts from different cars.
"It was automatic and you don't really have to learn to drive an automatic, it's pretty easy," he says. "So without a license I'd be driving down the streets of Los Angeles."
Driving helped impress chicks and his brother let him borrow the car once and told Ramirez to fill it up with gas. "It was such a Frankenstein car," Ramirez says. "I was trying to visit a girl I was trying to impress. She called and said, 'Listen, I'm home and nobody's at my house right now, get over here.' I thought, 'Heck, yes!' And I thought it would be cool because I'm driving a car, not taking the bus." 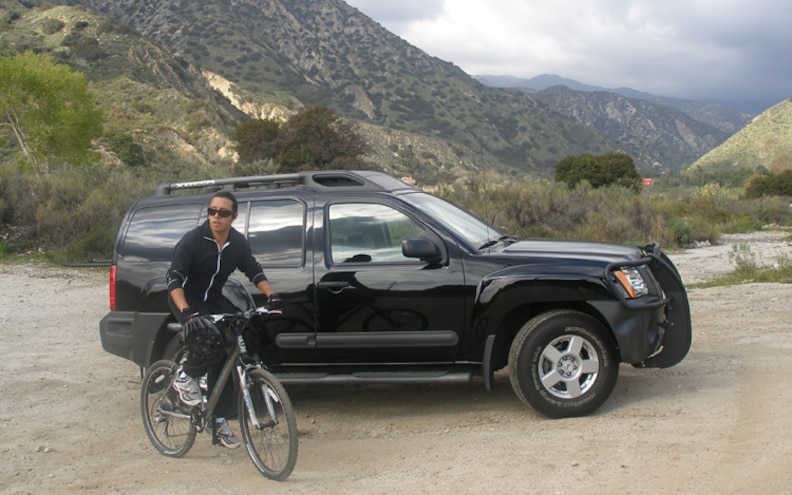 View Photo Gallery | 10 Photos
Photo 4/10   |   efren Ramirez Celeb Drive 2008 Nissan Xterra
The girl lived near Dodger Stadium, but the Escort failed Ramirez, in a move which could have been a scene right out of "Napoleon Dynamite." "I filled up the gas tank and I saw that one of the tires needed air. I didn't know how much air to put in tires, so I put in so much air, I drove two blocks and the tire literally exploded on Figueroa Avenue!"
Unfortunately for Ramirez, he never did go to her house that day. "The car started shaking, you hear an explosion. When the tire exploded it popped the fender out. It just flew off!" he laments. "Like a nerd, I called the girl saying, 'I can't go.' I tried to explain the situation and she just hung up on me."

View Photo Gallery | 10 Photos
Photo 5/10   |   efren Ramirez Celeb Drive 2008 Nissan Xterra
First car bought
Ramirez later bought his own car. His dad co-signed and helped him buy a used black 1988 Honda Prelude 2.0Si, with a manual tranny in an effort to top his brother's Accord.
His dad taught him how to drive stick on a well-known steep area, so Ramirez could master it. "My dad took me up La Cienega going up to Sunset Boulevard, it's a steep hill and he said, 'If you don't learn here, forget it,'" he laughs. "I was like, 'Dad, why don't you just take me to San Francisco!'"
Once his Prelude was paid off, Ramirez started racing his brother and friends. One time he raced it on the Pasadena Freeway and lost the Prelude to his competitor who had a Camaro. They raced for pink slips back then and he had to borrow his brother's Accord to compete in another race to get his Prelude back.

View Photo Gallery | 10 Photos
Photo 6/10   |   efren Ramirez Celeb Drive 2008 Nissan Xterra
"I used my brother's car!" Ramirez says, describing the race with excitement. "We raced from downtown Los Angeles to Fair Oaks in Pasadena. I grew up all over L.A. and one of the neighborhoods was Highland Park and it was right between Pasadena and downtown and my brother and I would always drive the 110 all the time, we were familiar with that. When you're driving and racing there, you've got to make sure that your car's low, you've got really good tires and you've got really good brakes." So he won the Prelude back in the twisties on that freeway.

View Photo Gallery | 10 Photos
Photo 7/10   |   efren Ramirez Celeb Drive 2008 Nissan Xterra
Ramirez's dad was a mechanic, fixing trucks for Hertz Penske and he taught his son how to fix his own car. "He taught me how to take apart my engine and rebuild it. I had to several times because I used to race my car all the time and I ended up exploding my clutch at one point," he laughs. "Another time my timing belts went off out, I bent all the heads, so we had to take half my engine apart and replace it with new parts. Then I souped up my car -- I put a Flowmaster muffler and I had an air intake."
To this day, his dad's lessons on car mechanics still come in handy. "My dad wanted me to know so if there's any failure, I could listen to the car and ask myself, 'Is it the engine, or electrical, is it the alternator, the belt, the starter?' Now a lot of friends ask me advice when their car seems to fail them," Ramirez says, with a chuckle.

View Photo Gallery | 10 Photos
Photo 8/10   |   efren Ramirez Celeb Drive 2008 Nissan Xterra
"Napoleon Dynamite" and a Nissan Xterra
After the success of the sleeper "Napoleon Dynamite" in 2004, Ramirez bought a used 2003 Nissan Xterra. He loved it so much, when it came time to buy a new car, he bought a 2008 Xterra, which he rates a perfect 10.
"I have the Xterra to travel and go off-roading and if I want a sports car then I'll get the Tesla," he says. "My father used to own a truck and I wanted to get a truck. I have tons of friends who have SUVs and I didn't want to get one of those ginormous cars. I wanted something simple and practical."

View Photo Gallery | 10 Photos
Photo 9/10   |   efren Ramirez Celeb Drive crank High Voltage Shot
Favorite road trip
When he's not on a movie set, Ramirez throws his mountain bike on the back of Xterra and just drives. He's driven to San Francisco, Utah, Arizona and Texas. "You get a clarity," he explains. "For actors, you do a film and you have that piece of material for about three months of your life. Once that's done, you want to be able to escape out of that and come back to the world you actually live in. I'm able to hop in my truck and put my bike on the bike rack and just go away."
Sometimes he'll go off road in his Xterra with his brothers in the Mohave Desert and by Edwards Air Force Base, "which was always funny because Eddie gets car sick so he'll probably drive his Mustang," he laughs. "My next endeavor is to go to the Grand Canyon with my brothers and go white water rafting," he says. "I've never driven to the Grand Canyon so I'll be able to go ride my bike and go in my Nissan Xterra and go off-roading there, it's going to be awesome."
His favorite road trip is going mountain biking in St. George, Ogden and Provo in Utah. "You have to go through San Bernardino, Victorville, Hesperia, you get to see a lot of the western part of the U.S.," Ramirez said. "I really love red rock because it has its own vibe. You go to ride your bike to disappear. Another place I want to check out is Sedona."

View Photo Gallery | 10 Photos
Photo 10/10   |   efren Ramirez Celeb Drive crank High Voltage Shot
Automakers
Ramirez is considering buying a Tesla and he's excited about what automakers will come up with in the way of green offerings. "I'm anxious to see what's going to happen with cars in the next 10 years," he says. "I want to see more green without losing the power and torque a car can have."
"Crank: High Voltage"
Ramirez returns to the action flick "Crank: High Voltage" with actors Jason Statham and Dwight Yoakam, who were also in 2006's "Crank." In this sequel Ramirez plays Venus, the twin brother to Kaylo, who he played in the last film. "He's darker and he's out there wanting to avenge his brother's death," Ramirez says. Growing up, he practiced Tae Kwon Do and learned to use nunchucks. That helped him in this movie, in which Ramirez studied kung fu and weapons training for three months. "I'm pretty badass," Ramirez laughs, referring to his movie character.