Toyota Hilux Comes to U.S....Sort Of 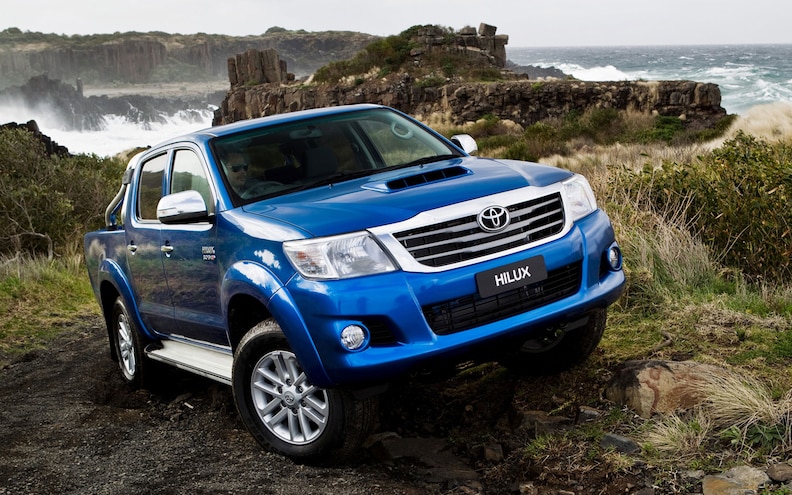 Since the mid-1990s, Toyota's bread-and-butter pickup brand in the U.S. has been the Tacoma, but in the rest of the world, the universally-recognized truck nameplate for the Japanese juggernaut continues to be the Hilux. Those with a coherent memory of the Nixon and Ford administrations may actually remember that the Hilux badge was used in the U.S used until 1975. For 20 years after that, Toyota's compact truck offering would simply be known as "Truck" or "Pickup" until the introduction of the Tacoma in 1995.
View Photo Gallery | 24 Photos
Photo 2/24   |   2009 Toyota Hilux SR5 4x4 Double Cab Diesel Front
Why, then, is the Hilux making headlines in the U.S.? Because it's part of the Specialty Equipment Market Association's (SEMA) measuring program, in which aftermarket accessory manufacturers can take measurements of a vehicle in order to create tooling to build accessories for those models. The program had been limited to vehicles sold in the U.S. market, but the Hilux is launching its international expansion.
View Photo Gallery | 24 Photos
Photo 3/24   |   2012 Toyota Tacoma Front Passengers Three Quarters
To find out more, we contacted Linda Spencer, Director of International and Government Relations for SEMA. She explained some of the technicalities of the program and the unique partnership the organization has formed with the Department of Commerce. "A vehicle brought to the U.S. that is not sold in the U.S. is considered a 'temporary' import, which can be in the country for up to a year," she said. "You need waivers from NHTSA and the EPA. The vehicle will be transported to different venues by flatbed, since it's for measuring purposes."
Why the Hilux? Spencer said the truck was selected on the basis of feedback from overseas buyers, input from U.S. members, and data from the number of models on the road worldwide. Models are also selected on the basis of how well they lend themselves to customization and accessorizing. Spencer also said U.S.-made accessories have a very good reputation for quality in overseas markets and foreign buyers are asking for more of them for vehicles sold in their home markets. However, the cost and logistics of purchasing, importing, transporting and evaluating a foreign-market model can be prohibitively expensive for a small business.
SEMA was able to purchase the Hilux thanks in part to a $500,000 grant from the Department of Commerce's International Trade Administration's Market Development Cooperator Program. The orgnization will make it available at three measuring sessions across the country. The first will be in Southern California at the organization's headquarters, then one in the Midwest, and the third on the East Coast. After the measuring sessions, the truck will be made available to individual members for on-site measurement.
View Photo Gallery | 24 Photos
Photo 10/24   |   2011 Toyota Hilux SR5 4x4 Double Cab Diesel Front
Spencer said that the two largest target markets for the international program are the Middle East and China. Making models sold in those markets available to U.S. members helps make them more competitive in a global marketplace. "It gives a depth to our members' product offerings and helps tackle issues that small businesses face when they try to export. It also puts us on more equal footing with what other foreign governments are doing in terms of developing markets."
View Photo Gallery | 24 Photos
Photo 11/24   |   2011 Toyota Hilux SR5 4x4 Double Cab Diesel Right Rear
The Hilux will certainly not be the last model to be part of the program. Spencer said there's been a lot of interest in both the global T6 Ford Ranger and Volkswagen Amarok pickup from member companies, and both are strong contenders to be the next vehicle in the international vehicle measuring program.
View Photo Gallery | 24 Photos
Photo 12/24   |   Toyota D4D Diesel Engine
We know how much you Truck Trend readers like to geek out on stats and figures, so we've compared the numbers between the Tacoma and Hilux to point out the similarities and differences between the two trucks. One of the most significant differences is the availability of a diesel engine in the Hilux. In fact, in some markets, the only available engine options are diesels. The Australia-market Hilux offers the option of a 4.0-liter V-6, the same as the top engine offering in the U.S.-spec Tacoma. Specifications on the Hilux vary by market, but we picked the UK and Australian-spec Hilux models, which are close approximations of models sold in the broader European and Asia-Pacific markets.
As you can see, the Tacoma and Hilux are similar in a number of specifications, but there's a considerable difference in the towing and payload capacities. The Tacoma has a higher maximum towing capacity at 6400 lb, but a mere 1415 lb payload. Meanwhile, a properly-equipped Aussie-spec Hilux can shoulder an impressive 3064 lb payload -- nearly as much as the top-spec Ford F-150, which can carry up to 3120 lb.