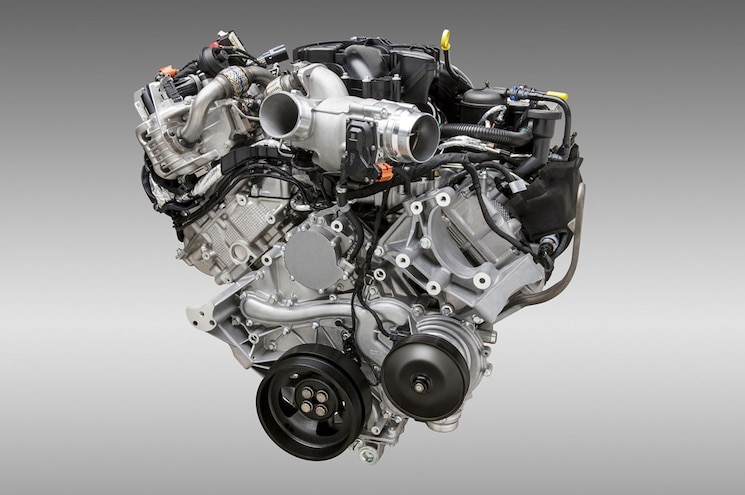 If you've followed the diesel performance scene for the past decade, you're well aware of the established pecking order of the Detroit Three among diesel enthusiasts. Cummins was a strong first place, followed by the Duramax, and the Ford Power Stroke generally taking a distant third. Ford's lack of respect among the diesel community largely stemmed from problems on the 6.0-liter Power Stroke diesel co-developed with International Harvester. When Ford brought out the 6.7-liter Power Stroke in 2011, it was a complete clean-sheet, in-house design, bursting with state-of-the-art features like piezoelectric injectors, reverse-flow heads, and a compacted graphite iron block. Its horsepower has been class-leading for the last few years at 400 hp, but its ample 800 lb-ft was recently surpassed by Ram in 2013 with an 850-lb-ft Cummins. If you thought the HD torque wars ended there, think again. Meet the 2015 Ford 6.7-liter Power Stroke, bringing a massive 440 hp and 860 lb-ft of torque to the game.
Ready To Haul
While those power figures will make for plenty of bragging privileges down at the honky-tonk parking lot, let's not forget the true nature of HD trucks, which is that of a workhorse. To that end, the power increase with the new engine brings maximum towing capacity for the F-450 to a claimed 31,200 pounds with a gooseneck hitch, 26,500 with a fifth wheel, and a gross combined weight rating of 40,000 pounds. The max-tow package on the 2015 F-350 offers 26,500 pounds of fifth-wheel/gooseneck capacity and a GVWR or 35,000 pounds. Enabling the higher capacities are revised front springs on the F-350 and a wide-track axle. The F-450 gets commercial-spec 19.5-inch wheels and tires, upgraded rear U-joints and new rear leaf springs, new front and rear stabilizer bars, and upgraded shocks. The steering system also gets stronger gears and linkages for 2015.
Although Ford has agreed to comply and report the 2015 F-150's towing capacities according to SAE J2807 standards, in the HD realm, the Detroit Three have yet to reach a truce, so you can expect the counter-claims to keep coming from across town.
Power-Packed
What accounts for the added power? As we reported earlier from our first peek at the coming changes for the 2015 Super Duty from the Texas State Fair, the biggest changes were a larger, non-wastegated turbocharger and new injectors that have a finer fuel spray mist, which enables more complete combustion, quieter operations, and lower emissions. And for the naysayers who doubt the Power Stroke's legitimacy as a commercial-grade engine, note that on the 2016 F-650 and F-750, the formerly available Cummins 6.7 ISB has been replaced by this new Power Stroke. It will be available in three levels of tune in medium-duty trucks, but count on the 440/860 configuration as being top of the heap.
Not long ago, the speculation was which OE would be first to surpass the 700-lb-ft mark with its factory diesel. That benchmark has been long since surpassed. Now, the question of who will be first to 1000 lb-ft becomes a real issue. Certainly, a simple chip tune, intake and exhaust on the updated Power Stroke will get it into four-figure territory. We know there are a lot of Cummins and Duramax loyalists out there, but this latest evolution of the Power Stroke has definitely gotten our attention. Has it gotten yours?