If you joined us for our coverage of the 2008 Paris Motor Show a few months back, you may remember the Peugeot Prologue HYmotion4 Concept, touted as Peugeot's first hybrid and first crossover. Today, Peugeot has revealed the 3008, dubbed "le crossover by Peugeot" and essentially a production version of the Prologue. 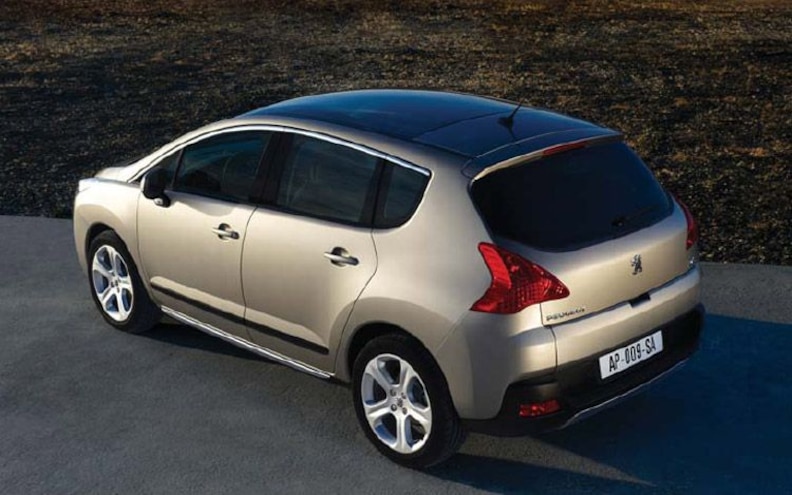 View Photo Gallery | 9 Photos
Photo 2/9   |   peugeot 3008 rear Drivers Side View
When the 3008 debuts at the Geneva Motor Show next month, it will come in gasoline, diesel and hybrid flavors. Choose gasoline and you'll have a choice of a 1.6L VTi engine that produces 118 hp and 118 lb-ft, a 1.6L THP engine that makes 148 hp and 177 lb-ft or a 1.6L THP engine that makes 154 hp and 177 lb-ft. The VTi engine mates to a five-speed manual gearbox while the THP engines instead use a six-speed manual. Fuel mileage should range from 31 mpg combined to 33 mpg combined. The 1.6L engine was co-developed with BMW. Gasoline engines should hit 62 mph in as little as 9.8 seconds. 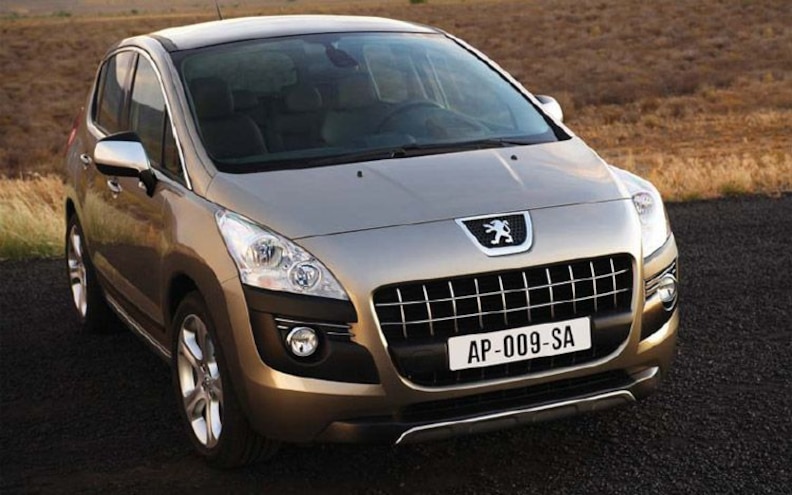 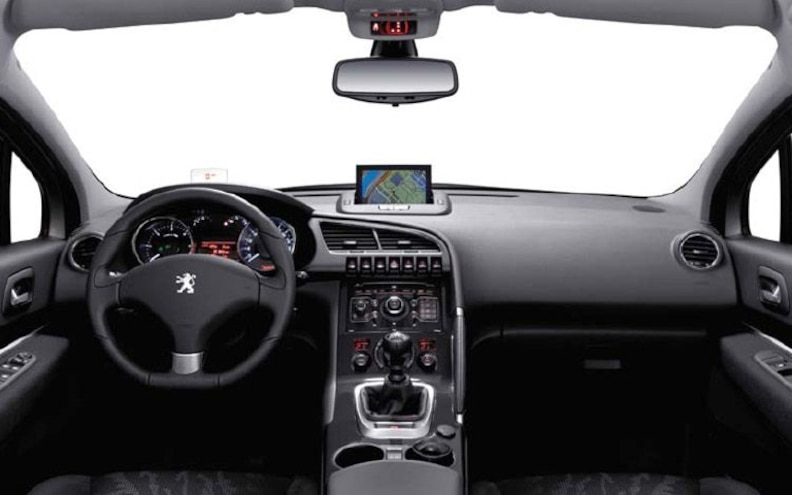 View Photo Gallery | 9 Photos
Photo 4/9   |   peugeot 3008 interior View
While the gasoline and diesel versions of the 3008 are expected to hit showrooms in the summer and fall of 2009, the new hybrid likely won't be seen until the 2011 model year. Not much is known about the production version of the HYmotion4 hybrid system, but it will feature one of the HDi FAP diesel engines up front and an electric motor in the rear and is expected to reduce CO2 emissions by as much as 35%. The vehicle will be able to operate at low speeds on electric power only, though we don't know exactly where the cut-off is. Should the concept's specs carry over, the 3008 would use the 161-hp 2.0L diesel engine and with a 36-hp electric motor, the entire hybrid system combined would produce about 197 hp with 221 lb-ft of torque at the front wheels and 148 lb-ft at the rear wheels and return 57 mpg combined.
Helping the 3008 achieve its stellar mileage are a host of mpg-friendly tricks. They include low rolling-resistance tires, carefully tuned aerodynamics, a drag coefficient of just 0.296 and the extensive use of lightweight materials.
Though a fuel-sipper, the 3008 is also quite spacious. The vehicle features an 8.57-ft. wheelbase, a full six-foot width, a height of 5.38 ft. and a total length of 14.3 ft. One of its most striking features, though, is the 57 sq-ft. panoramic sunroof. The 3008 is also a capable hauler, as every seat except the driver's can be folded flat. This allows objects up to 8.6 ft. long to be loaded and boasts cargo space of up to 56.6 cubic-feet. The 3008 will weigh in between 3,084 lbs and 3,400 lbs.
Peugeot's HYmotion4 hybrid gizmos won't be the only hi-tech features on the 3008, though. The crossover will also come with a heads-up display, hill start assist, a distance alert system for maintaining a safe following distance, an automatic electric parking brake, the World In Peugeot (WIP) multimedia system with JL Audio sound system and six-disc CD player, automatic directional bi-xenon headlights, a navigation system, front and rear parking assist sensors, a tire pressure monitoring system, adaptive cruise control, an auto-dimming rearview mirror, automatic wipers, automatic power-folding mirrors, dual-zone climate control, Dynamic Roll Control, Grip Control and front, side and side curtain airbags. Leather seats are optional. 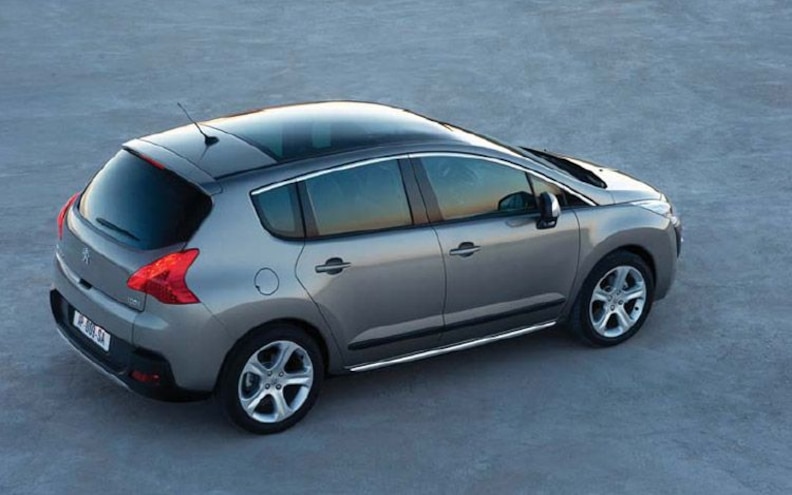 View Photo Gallery | 9 Photos
Photo 5/9   |   peugeot 3008 top Passenger Side View
The 3008 should also be as fun to drive as the 308 it's based on, thanks to its high structural rigidity and wide track. At 60.3 in. wide in front and 60.1 in. wide in the rear, the 3008 should be quite stable on the road as it rolls on its 16-, 17- or 18-in. wheels. Multi-valve shock absorbers will help keep the modified McPherson Strut suspension up front and the torsion beam suspension out back riding smooth. 11.1- to 11.9-in. front brakes and 10.5-in. rear brakes should bring it to a stop nicely.
The Peugeot 3008 will debut at the 2009 Geneva Motor Show in Switzerland in early March. Gasoline and diesel models should go on sale in the summer and fall, with the hybrid following sometime between then and 2011. No pricing has been announced yet. 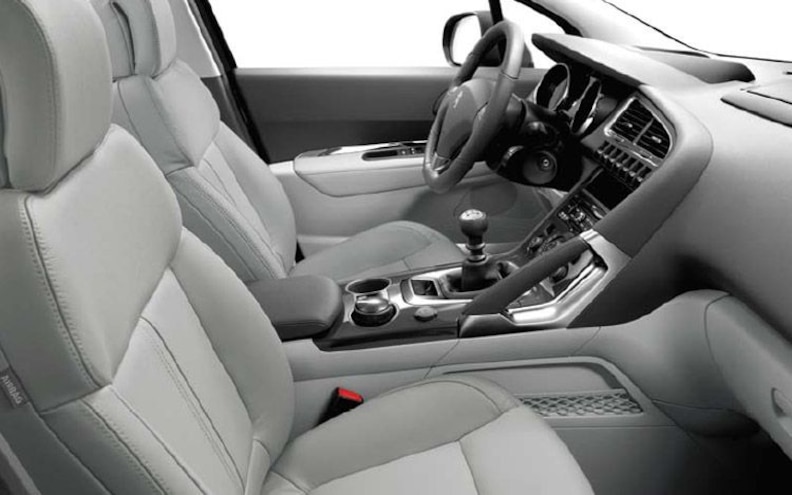 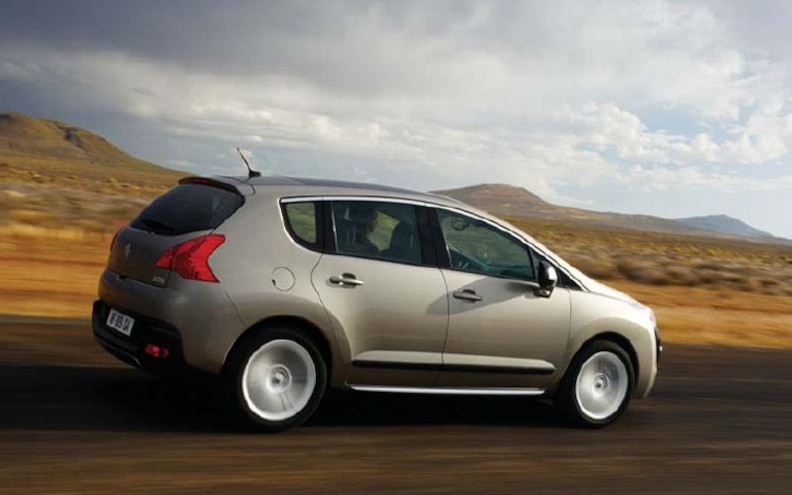 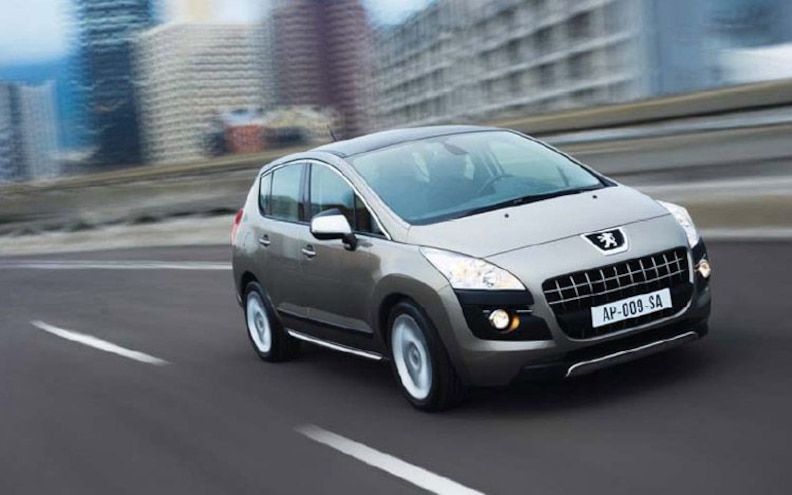 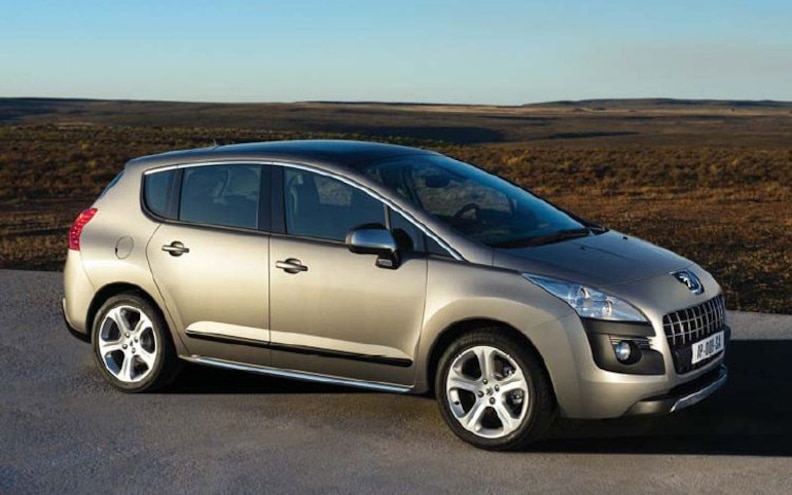