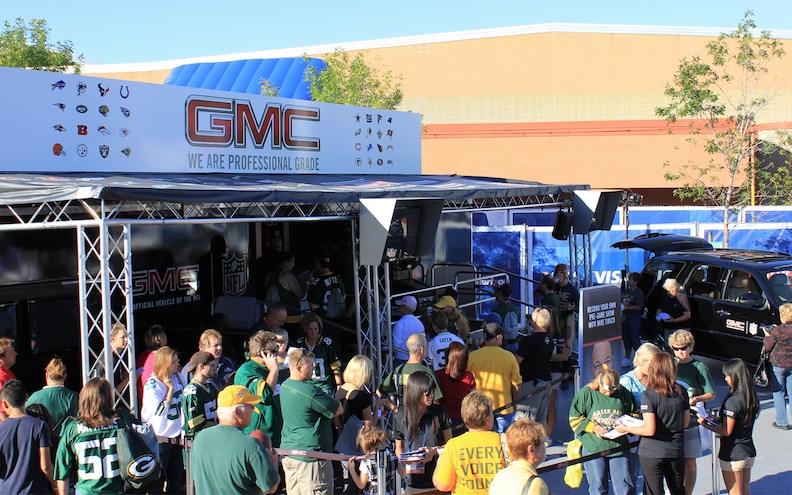 After it proved to be a success last year, GMC in partnership with the NFL, is going at it again and kicking off its second-annual Monday Night Football Tour this weekend in Dallas, Texas.
View Photo Gallery | 3 Photos
Photo 2/3   |   GMC Monday Night Football Logo
The tour will also make its rounds to other major cities across the country, and provide plenty of fun activities for fans, including a football skills contest, meeting NFL pros, and test driving GMC vehicles. Fans will have a chance to meet and throw the pigskin around with pros like Miles Austin, DeSean Jackson, Mike Alstott, and Tony Dorsett. ESPN Monday Night Football's famous voice, Mike Tirico will also be joining the fun.
Prizes will also be on hand for those that participate in contests, and fans will have a shot at winning Monday Night Football tickets, NFLshop.com gift cards, and autographed memorabilia.
View Photo Gallery | 3 Photos
Photo 3/3   |   GMC Monday Night Football Truck
"GMC is taking its game plan for the Monday Night Football Tour to the next level by delivering a more engaging interactive event for NFL fans," said Craig Bierley, GMC Advertising and Sales Promotion director. "In its first year, the tour helped GMC connect with NFL fans in a fun and engaging way. We're looking to build on that success in 2011."
But it's not all about fun and games, but helping children across America. GMC has also teamed up with United Way volunteers to build playgrounds in local communities to encourage kids to become more active. United Way is pushing to get 1.9 million more kids active and healthy by 2018.
"GMC recognizes how important it is to raise awareness about the issue of childhood obesity and to create new opportunities for young people to lead healthier lifestyles," Bierley said. "By working with the NFL and United Way, GMC is helping make communities stronger."

- OF
By Karla Sanchez
220 Articles