How a 2012 Toyota Tundra Towed the Space Shuttle Endeavour

Taking the Icon to Its New Home 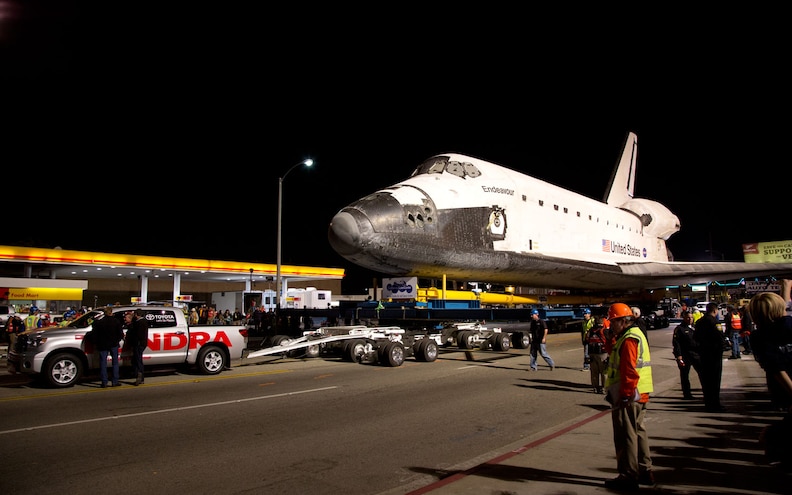 Late Friday night, near two local icons -- namely the notorious 405 Freeway and popular snack spot Randy's Donuts -- another icon hitched a ride to its new home. For most of the way from LAX to the California Science Center, the Space Shuttle Endeavour was going to ride on a modified version of a NASA overland transporter. According to collectspace.com, this rig had originally been used to take the Shuttles from the plant where they were built in Palmdale, California, to Edwards Air Force Base.
View Photo Gallery | 6 Photos
Photo 2/6   |   Tundra Endeavour Truck Left
For this Shuttle's journey, the transporter would be driven by four robotic vehicles. Overseeing it all was a guy operating a joystick used to steer all four as he walked alongside the Shuttle. There was one problem, though: the weight of the four robotic vehicles plus the Endeavour, approximately 650,000 pounds, was going to be too heavy to cross the Manchester Bridge. The California Science Center would have to figure out another way.
Toyota, which already had a 20-year partnership with the California Science Center, was part of the solution: it would use a Tundra to get the Shuttle over the bridge. The Tundra weighs significantly less than the robotic dollys, so it was just a question of getting the transporter connected to the back of the Tundra -- and getting a Tundra to tow 292,500 pounds.
View Photo Gallery | 6 Photos
Photo 3/6   |   2012 Toyota Tundra Towing Endeavour Left Front Angle
The Tundra in question was bone-stock, a CrewMax with a 6.5-foot bed and the 381-horsepower, 5.7-liter V-8, and it came off the same line in San Antonio, Texas, as all Tundras do. This Tundra used the company’s A-TRAC system and four-wheel drive to provide the traction the truck would need to move the Shuttle from a stop; of course, the Toyota came equipped with the tow package. Toyota had done tests ahead of time with a higher amount of weight than the Shuttle/transporter combo, and it did well there.
Sitting on Manchester, ready to roll, there was still plenty of prep work to complete before the tow began. By the time press and VIPs arrived, the Shuttle had been disconnected from the robotic dollys and waited for its connection to the back of the Tundra, where it would be towed not with a gooseneck or fifth-wheel, but with a regular-size steel hitch. The power was disconnected at Randy's -- there would be no donuts for onlookers -- and there were portable lights near and on the bridge to illuminate the move. Power lines had been raised to ensure the immense Shuttle wouldn’t snag them. Light poles and signals were rotated out of the way. Hordes of fans stood along the streets in anticipation of this event.
The dollys were so heavy they had to go over the bridge one at a time. They went over first. Then, after Toyota got video crews and GoPros set up, there were a couple of tests, and the truck was ready. Despite what people may think, this was a bone-stock Tundra. No, it was not pushed from behind. No, it did not have the advantage of going downhill. Stunt driver Matthew McBride was behind the wheel, and it was not his first time in that seat. If you recall the Tundra ad where the truck is being tested on uphill spiraling ramp in the Mojave Desert, McBride was the driver there as well.
So how did the Tundra do it? By going really, really slowly. The truck was set to take the Shuttle over the bridge at 2.5 mph, in 4-Lo. We had heard it would take about 7 minutes for the pair to get to the other side. But from our vantage point (and admittedly without a radar gun), it looked like the Tundra hauled the Endeavour faster than that.
Cheers of “USA! USA! USA!” could be heard from the crowd as the Tundra and Endeavour crossed the bridge. After hours of anticipation on this evening, and weeks of planning, the bridge crossing was over in the blink of an eye. Once it had completely crossed, the 405 reopened, Randy’s was ready to start making donuts again, and the Shuttle would be reconnected to the robotic dollys and go on the final 9 miles of its final journey. Check out our video below!