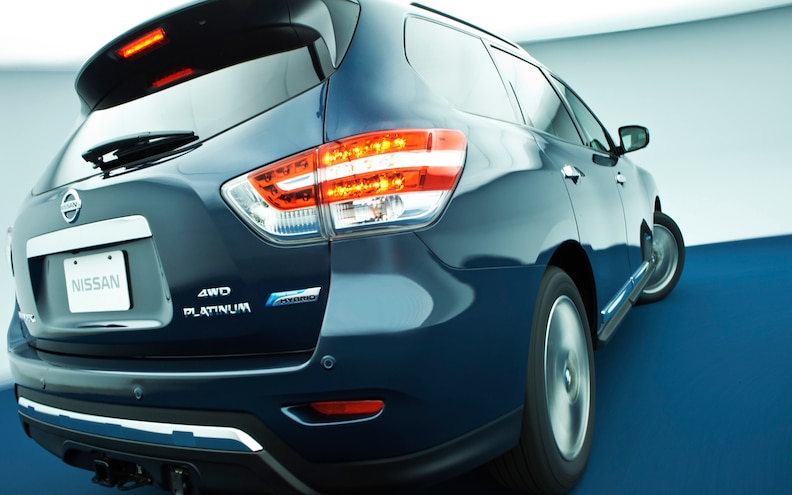 Typically, in automotive advertising, the highway fuel economy figure is the one that gets all the attention, whether in the starburst call-outs in the weekend dealer ads, or the "class-leading" claims on TV spots. Comparing the performance of the 2014 Nissan Pathfinder Hybrid using this yardstick compared with its conventionally powered counterpart, a modest 1-mpg improvement may seem anti-climactic. But the bigger story, and one that will likely be much more appreciated by consumers in the day-to-day slog, is the hybrid model's impressive combined mpg total of 26. This compares with the front-drive V-6 model's still-impressive 22-mpg combined total.
View Photo Gallery | 33 Photos
Photo 2/33   |   2014 Nissan Pathfinder Hybrid Front View
Unlike some other models, where opting for the hybrid or high-efficiency powertrain means a Spartan, hair-shirt trim level, or glacial acceleration, the 2014 Pathfinder Hybrid promises power and responsiveness on par with its conventionally powered stablemate. A new supercharged 2.5-liter four-cylinder combined with a 15-kW electric motor is rated at a combined power output of 250 hp and 243 lb-ft of torque, just 10 hp less, but 3 lb-ft more than the V-6 model. Naturally, the transmission is Nissan's ubiquitous CVT, which has essentially replaced conventional geared automatics in all of Nissan's transverse drivetrain applications.
View Photo Gallery | 33 Photos
Photo 3/33   |   2014 Nissan Pathfinder Hybrid Rear Three Quarters View
Towing capacity takes a small hit, from 5000 pounds to 3500, but that's about the only sacrifice over the conventional model, aside from the $3000 option for the hybrid drivetrain. Interior volume and seating capacity are the same as the conventional model's, with the hybrid system's lithium-ion battery stored under the third-row seat.
View Photo Gallery | 33 Photos
Photo 4/33   |   2014 Nissan Pathfinder Hybrid Engine View
Additional differences between the hybrid and normal Pathfinder model are partial-LED taillights on the hybrid model and "PureDrive Hybrid" badging. Otherwise, the hybrid model retains all the features of the standard Pathfinder, including Nissan's Latch and Glide second-row seats. The hybrid will be offered in 2WD and 4WD configurations, and on SV, SL, and Platinum trim levels.