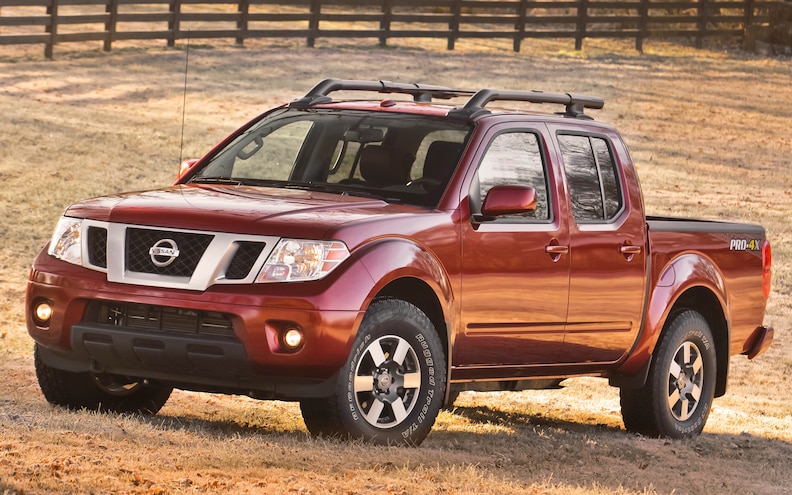 Nissan announced pricing on both the Xterra and Frontier today, and did something unusual for the industry: It lowered the prices on both. For the Xterra, the price is reduced an average of $2191. Even though the PRO-4X grade now comes with NissanConnectSM with navigation, auto on/off headlights, and a RearView monitor, the price of that model goes down $1200, now starting at $30,285 (including destination) with the manual transmission. It also receives a revised look in the cabin, with updated seat embroidery and contrast stitching and the addition of an outside temperature display. Other price reductions include the X, down by $2540, and the S, down $2620 even with the addition of Display Audio with CD/AM/FM/Aux/USB and SiriusXM satellite radio (subscription sold separately). There are two new colors for 2013, Glacier White and Cayenne Red, and all Xterras get slide-on rod-style sunvisors.
View Photo Gallery | 33 Photos
Photo 2/33   |   2013 Nissan Xterra Front View 2
Like the Xterra, the Frontier also benefits from the price reduction and addition of equipment. The price goes down $1270 for the S King Cab 4x2, to $18,835, when equipped with the I-4 and manual transmission. The Frontier SV Crew Cab's price starts at $24,835 (including $845 destination), which is $1450 lower than in 2012.
The 2013 Frontier also sees the return of the Desert Runner, priced at $24,605 for the King Cab and $25,855 for the Crew Cab. The rear-drive Desert Runner comes with Bilstein off-road performance shocks. The PRO-4X adds Rear Sonar System, RearView Monitor, and upgraded audio. A trim level was renamed: The SV Premium Utility Package is now the SV Value Truck Package; it now comes with the RearView Monitor, floormats, rear sonar, dual-zone air conditioning, sliding bed extender, and trailer hitch. The SV Value Truck Package is $700 lower for the King Cab and $650 for the Crew Cab, when compared to buying the items separately. The package comes standard on all SV models with the manual transmission. There are also new exterior colors across the line: Glacier White, Graphite Blue, and Cayenne Red.
View Photo Gallery | 33 Photos
Photo 3/33   |   2013 Nissan Frontier Crew Cab Front View 3
Fuel economy has improved as well, going up 1-2 mpg, thanks to reduced engine friction and improved aerodynamics (a tailgate spoiler is now on all models). PRO-4X models now come with a Satin Chrome grille, plus fog lights, new logos and graphics, updated stitching and seat embroidery inside, RearView Monitor, rear sonar, dual-zone auto A/C, and auto on/off headlights. SL models now come with a rear-view camera, rear sonar, dual-zone auto A/C, and auto on/off headlights. SV models add SiriusXM and an additional 12-volt power outlet. Bluetooth was added to SVs and Desert Runners, and slide-on rod-style sunvisors were added to all models. The SL adds navigation plus the PRO-4X Luxury Package, and a Display Audio with CD/AM/FM/Aux/USB is available with SV, Desert Runner, and PRO-4X models.
View Photo Gallery | 33 Photos
Photo 4/33   |   2013 Nissan Frontier Crew Cab Rear View
Source: Nissan