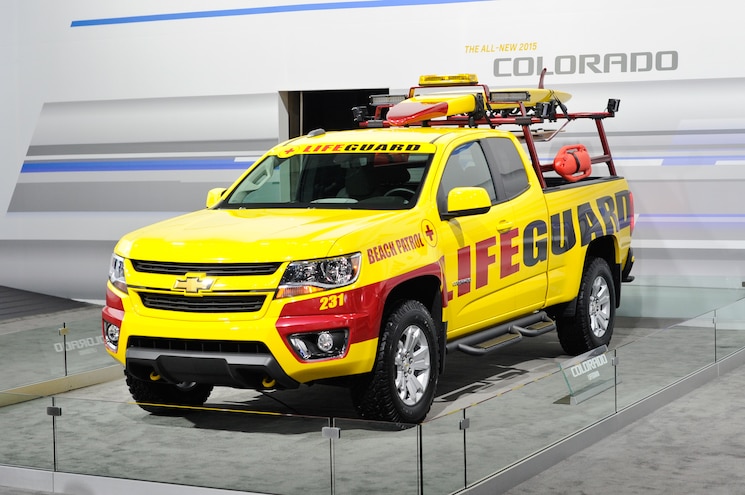 Even though the big reveal of the 2015 Chevrolet Colorado took place yesterday, there was one more surprise today: Chevrolet unveiled a Colorado that was set up for lifeguard duty. This extended-cab model was done up in yellow paint with red and black graphics, plus racks in the bed for plenty of rescue equipment. GM is aiming this truck more toward a lifestyle market, for people eager to visit the outdoors. This truck is built to be versatile enough to carry gear for those who mountain bike, snowboard, or surf.

No, we don't expect this version to come to market, but the Colorado would fit in as a lifeguard vehicle. We've seen plenty of Nissan Frontiers at the beaches in Southern California, so it wouldn't be out of the realm of possibility. The truck would have plenty of power, too, with the choice of two engines at launch, a 193-hp (estimated), 2.5-liter four, and a 302-hp (estimated) 3.6-liter V-6. And if buyers wanted to wait a year, they could get a 2.8-liter Duramax I-4 turbodiesel under the hood, which could offer more than 350 lb-ft of torque. The truck goes on sale in fall 2014 -- surfboard not included.