Detonation; SEMA for the First Timer

Taking It All In 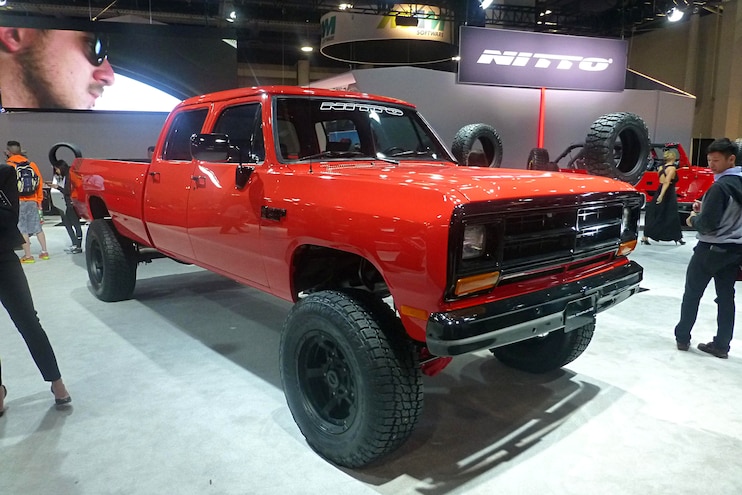 When the acronym “SEMA” is mentioned to a group of automotive enthusiasts, people’s ears perk up (if you said “Specialty Equipment Market Association,” most people would give you a puzzled look). The conversation quickly turns to questions like: “What is it like?” or “Have you been before?” I heard these questions in the weeks leading up to SEMA any time I mentioned I’d be attending. Well, for all the years I’ve said I wanted to go to check out all the cool new products, displays, cars, and trucks I have read about for so many years, I finally made it in 2016.
I have to say, the SEMA show did not disappoint. There were so many cool parts, tools, and vehicles everywhere you looked, it was hard for me to stay on task at times. Some of the displays were even more distracting than the bling (eye candy). But, by the time SEMA ended, I was able to focus well enough to find good information and take lots of pictures. View Photo Gallery | 4 Photos
Photo 2/4   |   One of my favorite vehicles at the show was the Kymera. It started as a Chevrolet Colorado, but it went under the knife (or torch, in this case) for a total transformation. Two of my favorite things are incorporated into this build: hardcore off-roading and big-time diesel power. A twin-turbocharged Cummins mounted amidships (which takes up most of the cab’s interior) powers the off-road-themed creation.
During my wandering (I felt lost at times due to the mere size of the event) around the show, I met a lot of really nice people from different avenues of the automotive aftermarket and had great discussions about products and the industry. I came across a lot of new pieces and learned several companies that don’t traditionally make diesel-specific products are moving into or looking at that market. It is good to see diesel keep expanding. Using 2016’s show as a benchmark, I believe there’s going to be a lot more good stuff coming out in the near future.
Being the diesel enthusiast I am, the 2016 show was the place to be. Oil-burning vehicles were everywhere. Fullsize Ford, Ram, and GM pickups with big lifts, big tires, and crazy paintjobs dominated the show. But there were also enough different styles and configurations of trucks to meet just about anyone’s taste. It was good to see diesel editions of the Chevrolet Colorado, GMC Canyon, and Nissan Titan XD on display and customized. The popularity of these lighter-duty rigs is on the rise; people are seeing their benefits and manufacturers are jumping on board with plenty of new products for them. 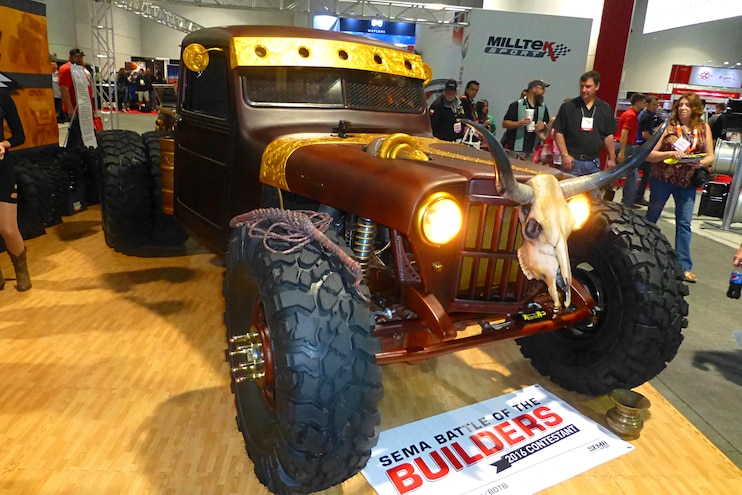 View Photo Gallery | 4 Photos
Photo 3/4   |   The detail and style of this Willys pickup is just crazy cool. The Cummins engine even received some detailing.
One thing that was really awesome to see was the number of diesel-powered custom show trucks. I can remember that not too long ago, if you saw a custom truck that didn’t have a big V-8 gasoline engine, it was an oddity. But now, having a diesel engine seems to be almost commonplace in the customizing world. There were off-road buggies, restored or customized trucks, and rat rods sporting oil-burners. The engine of choice for a lot them is the 5.9L Cummins 6BT. The I-6 is a good fit in many of the older trucks that originally came with gas powerplants of the same configuration. The straight-six configuration also provides a nostalgic feel with a modern twist.
Cummins is not the only oil-burner being used by builders. The GM contingent is also well represented. One truck in particular is called the “Million Dollar Duramax.” It is a Chevrolet Silverado 2500HD crew cab prerunner with a custom-built 6.6L Duramax mounted mid-frame. The rig was still a work in progress at SEMA, but it stood out as a very unique build once you looked inside. The completely tubular-chassis truck has the engine set way back into the cab for better weight distribution. The bars fit tightly around the engine to retain interior space, and the turbochargers were located at the rear of the cab. All the custom work and components are what make this vehicle so expensive. When this truck is completed, I hope we can get a chance to check out the finished product and see how well it performs.

View Photo Gallery | 4 Photos
Photo 4/4   |   This square-body Dodge Ram crew cab would be a nice addition to my fleet.
It is great to see how much love diesels are getting from builders and manufacturers. I can’t wait till next year; I have a feeling diesel will only continue to grow in the aftermarket, and there will be even more custom rides to check out.
John