Dirt Every Day and Dynatrac Build the First, the Biggest, and the Baddest JL on the Planet! 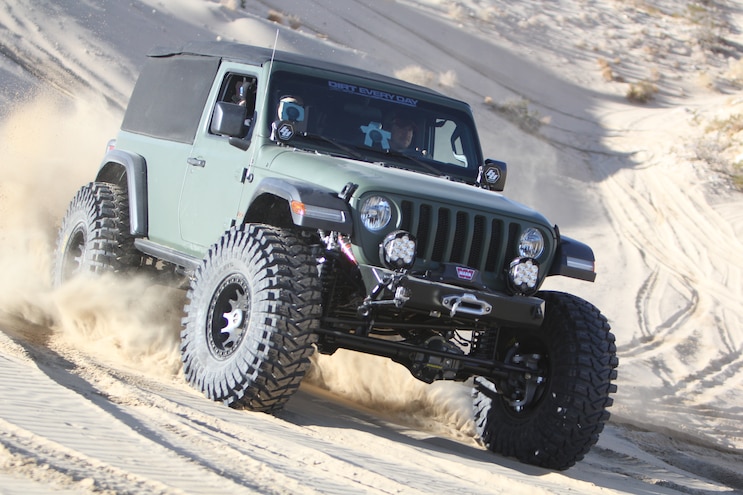 This Code 1 Wrangler JL is a huge list of firsts. The first The first JL to roll on 42-inch tires, the first JL to undergo a four-door/two-door conversion, the first JL to rock Dynatrac’s ProRock XD60/80 axle set, and the first JL to crawl the rocks of Johnson Valley, California.
Let’s rewind. This monster of a Jeep started its life in frost-bitten Ohio where Fred, from Dirt Every Day, and Tony, from Dynatrac, drove it off the dealer lot and across the United States, eventually landing in Huntington Beach, California. As quickly as the Jeep was assembled in the factory, it was torn apart, reshaped, reimagined, and rebuilt according to Fred and Tony’s fantastical dreams. What started as a sketch on the whiteboard was brought to life in just over a week!

View Photo Gallery | 18 Photos
Photo 2/18   |   How it all began—a sketch on the whiteboard
What is that you ask? Did Jeep reincarnate the TJ Unlimited with the extended two-door wheelbase? Not quite, but part of what makes Code 1 unique is the lack of the four-door JL Unlimited’s rear doors. What else is cool? The custom soft top and green vinyl wrap which give Code 1 its military and overland flavors—two more options not available from the Jeep factory.

View Photo Gallery | 18 Photos
Photo 3/18   |   Where did the rear doors go? They've been expertly removed to give Code 1 the "LJ-esque" look. Not to be overlooked is the custom soft top to replace the factory top.
Code 1 made its maiden voyage to the desert so we could see how the 42-inch tires and herculean Dynatrac axles held up to a rocky thrashing. At this point you must have some questions, but pictures will have to do.

View Photo Gallery | 18 Photos
Photo 5/18   |   The Dirt Every Day crew was not afraid to sling some dirt.
We can, however, steer you toward Motor Trend OnDemand’s episode of Dirt Every Day to see Fred and Tony wheel Code 1 for the first time. Also, keep an eye on Petersen’s 4-Wheel and Off-Road, where we expect Code 1 to make a print debut!
Will Code 1 make an appearance at King of the Hammers 2018? You’ll just have to find out.

- OF
By Jered Korfhage
32 Articles