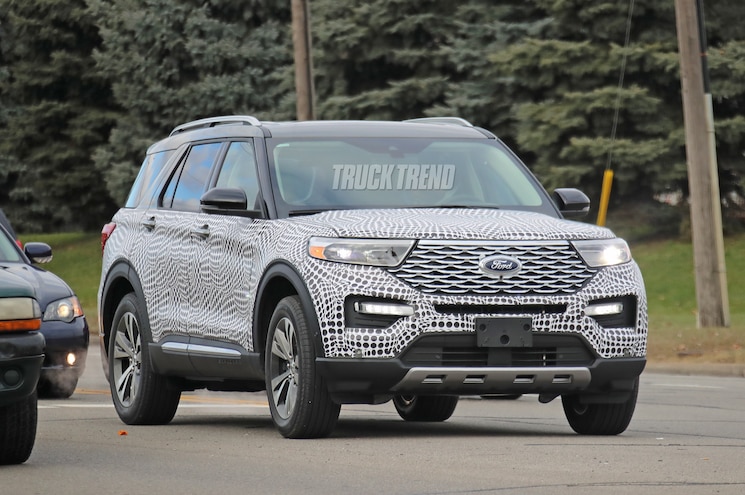 The 2020 Ford Explorer was recently spotted in Michigan wearing limited camouflage, giving us a good look at the next generation of the Blue Oval’s popular family SUV.
If you have to squint to see the changes, you’re forgiven—surprisingly, the next-generation Explorer looks very much like the utility it replaces. Blacked-out A-, B-, and D-pillars carry over, as does a cantilevered C-pillar in body color. The current Explorer’s Range Rover–aping front end has been jettisoned in favor of a mug with headlamps that integrate into the grille (with obvious Platinum-model details seen here). The front bumper incorporates a lower air intake and air curtains with integrated LED foglamps to direct air cleanly around the side of the body. The new taillights are doppelgangers for the current Explorer. 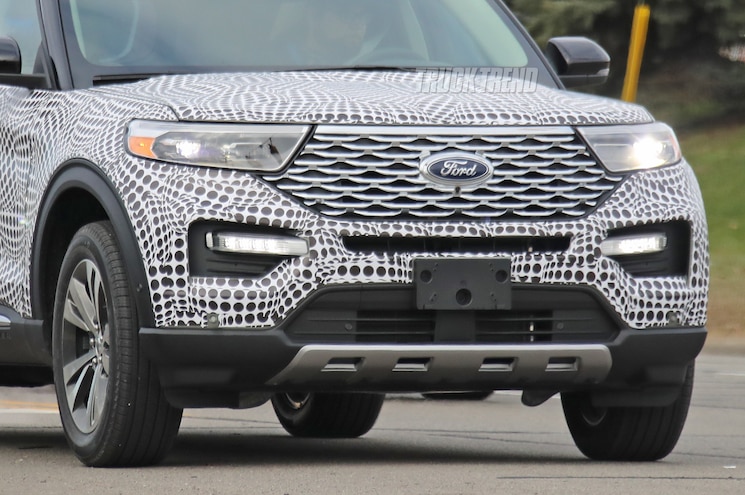 View Photo Gallery | 9 Photos
Photo 2/9   |   2020 Ford Explorer Platinum Spied Front End Graphic
Taken in whole, however, there are some differences between old and new. The 2020 Explorer has a more athletic stance, appearing to sit longer and lower than the vehicle it replaces—the latter is probably a visual effect, as we believe it will actually be taller than the outgoing model. Side glass sits nearly flush with the body, giving the new Explorer a sleeker appearance as well, and the head- and taillights integrate more cleanly into the body sides. Squint a bit and you’ll also notice that front overhang is reduced a bit, with a longer dash-to-axle ratio and rear overhang than the current Explorer. 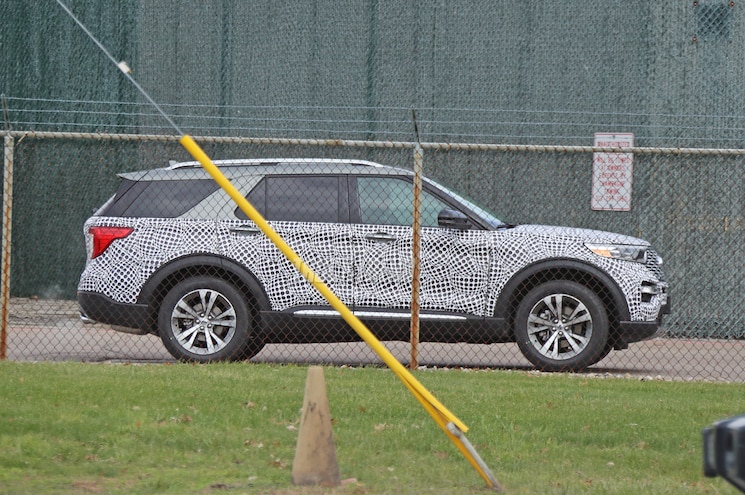 View Photo Gallery | 9 Photos
Photo 3/9   |   2020 Ford Explorer Platinum Spied Side Profile
The Explorer’s reshaped proportions are a clue to the SUV’s all-new architecture. Expected to be based on the company’s all-new CD6 modular platform, the Explorer is likely to make the switch from front-wheel to rear-wheel drive, with all-wheel drive remaining as an option. A version of this platform finds its way under the recently revealed Lincoln Aviator, and we think those bones are shared with the Explorer. That means we could expect a plug-in hybrid powertrain for the popular family SUV, though we doubt it’ll match the Aviator plug-in’s expected 450 hp and 600 lb-ft. 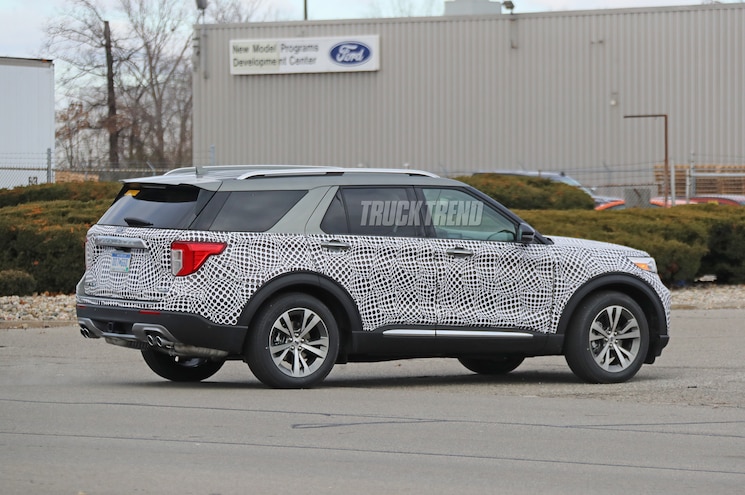 View Photo Gallery | 9 Photos
Photo 4/9   |   2020 Ford Explorer Platinum Spied Rear Quarter 01
Instead, we predict the newly rear-wheel-drive Explorer will get Ford’s 2.0L EcoBoost I-4 as its base engine, with 245 hp and 275 lb-ft of torque. This engine will likely get the plug-in treatment as an option, offering something in the neighborhood of 300 hp and 300 lb-ft. Upmarket versions of the Explorer may come with a 2.7L EcoBoost V-6, which makes 335 hp and 380 lb-ft as installed in the Edge ST. Finally, we think the forthcoming Explorer ST will get all the muscle of the recently teased Police Interceptor Utility, which optionally boasts the same 3.0L turbocharged V-6 as the aforementioned Aviator. The Lincoln’s output is pegged at 400 hp and 450 lb-ft; don’t expect either the PI Utility or the Explorer ST to give anything up in that regard.
So with as many under-the-skin updates as it has, you understand why we find it surprising Ford didn’t undertake a larger exterior redesign in creating the next-generation 2020 Explorer. Then again, taking the current, inoffensive design and making it a bit sleeker will likely ensure that current Explorer owners trade their old SUVs in for the new one when it hits the market. The 2020 Explorer is expected to make its public debut at the 2019 North American International Auto Show next month in Detroit, with sales to commence sometime next year.
Source: SpiedBilde Photography