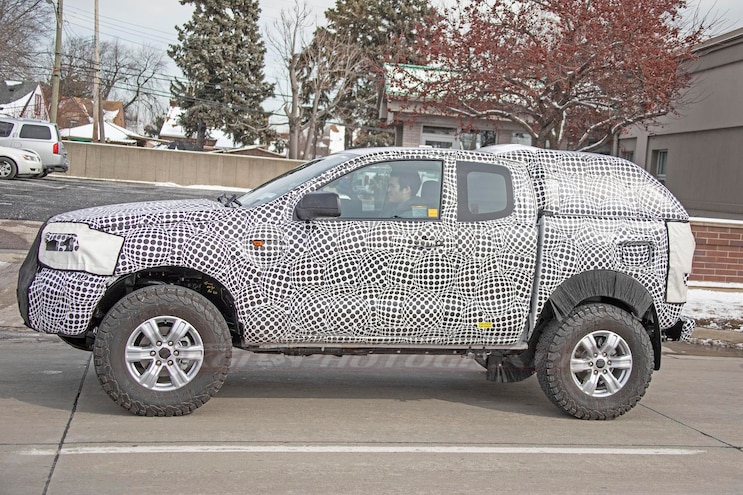 A spy photographer caught some interesting shots of this vehicle driving around near the Ford headquarters in Detroit recently. We are told this could be the new 2020 Bronco Ford has been working on. There has been plenty of pent-up anticipation surrounding the Bronco since Ford made the announcement that the vehicle is making a return.

View Photo Gallery | 10 Photos
Photo 2/10   |   1
Taking a closer look at the mule, we can’t help but notice the vehicle has an odd shape. It is possible Ford is trying to throw us off into thinking this is some sort of a pickup truck it is testing. This mule may have dummy panels on it. The Bronco is based off the Ranger platform. Ford has said there will be a two- and four-door variation of the vehicle.

View Photo Gallery | 10 Photos
Photo 3/10   |   2
This mule has a lifted stance with aggressive approach and departure angles—exactly what is needed to make the vehicle a legitimate off-roader. The mule has six-lug wheels along with aggressive BFGoodrich All-Terrain T/A tires. The design of wheels and tires is obviously subject to change with the final design of the vehicle. We at least get an idea of what could be offered on the Bronco.

View Photo Gallery | 10 Photos
Photo 4/10   |   4
The windshield is more upright and the face is squared off. The wheelbase is short as well. In August, spy shots circulated, creating a huge Bronco buzz. We then found out those resembled a face-lifted Ford Everest. The major difference here is the off-road features. The takeaway from these photos is Ford has gone to great lengths to disguise the elusive Bronco that there has been so much speculation about.