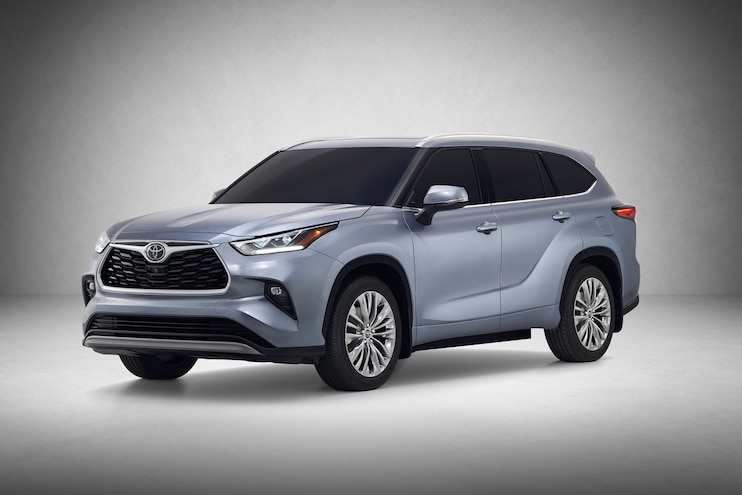 You’re forgiven if you shrugged your shoulders and thought, “What’s new?” the first time you saw the totally redesigned 2020 Toyota Highlander. Though totally redone compared to 2019, its exterior styling is very similar to the model it replaces. Hiding underneath the subtle skin, though, is an all-new modular platform and revitalized powertrains, as well as a more spacious and modern interior.

Since the Highlander’s biggest news is under the skin, that’s where we’ll start. Like the company’s other unibody vehicles, the Highlander has been redesigned using Toyota New Global Architecture (TNGA) as its base. TNGA has worked wonders on the suddenly fun-to-drive Camry and Corolla sedans, as well as the impressive RAV4 small CUV, so we expect good things from the Highlander. Part of TNGA’s magic is its extensive use of high-strength steel, which stiffens the chassis and makes tuning the front strut and rear multilink suspensions easier. Less chassis flex means engineers can dial in suspension stiffness more precisely without having to take body quivers into account. The TNGA platform has made each vehicle it underpins more fun to drive and more comfortable than its predecessors, and there’s no reason to assume any less of the 2020 Highlander. 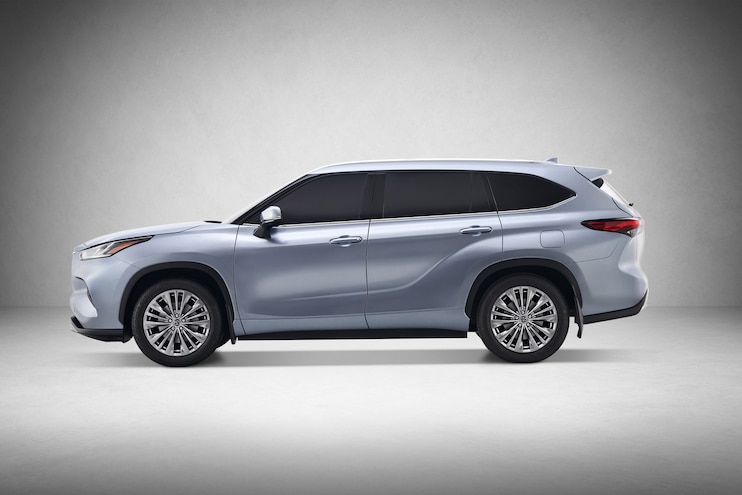 Mounted between those front unibody spars will be a choice of two powertrains: a 3.5L direct- and port-injected gas V-6 or a hybrid 2.5L I-4 paired with two electric motors. Gone is the old hybrid’s base-model, non-hybrid 2.5L I-4, which is a good choice on Toyota’s part—that engine just didn’t have the gumption to move the midsize SUV. The V-6 offers an estimated 22 combined mpg.
The new standard engine in the Highlander is that aforementioned V-6, which we presume is a carryover from 2019. The so-called D-4S fuel system switches between port and direct injection, optimizing power, fuel economy, and efficiency depending on engine load and driving conditions. As on the outgoing Highlander, the 3.5L mill produces 295 hp and 263 lb-ft, routed through an eight-speed automatic gearbox. Front-wheel drive is standard, with all-wheel drive available as an option. A tow pack enables a maximum towing capacity of 5,000 pounds on the V-6, thanks to a heavy-duty radiator with an engine oil cooler and an improved cooling fan. 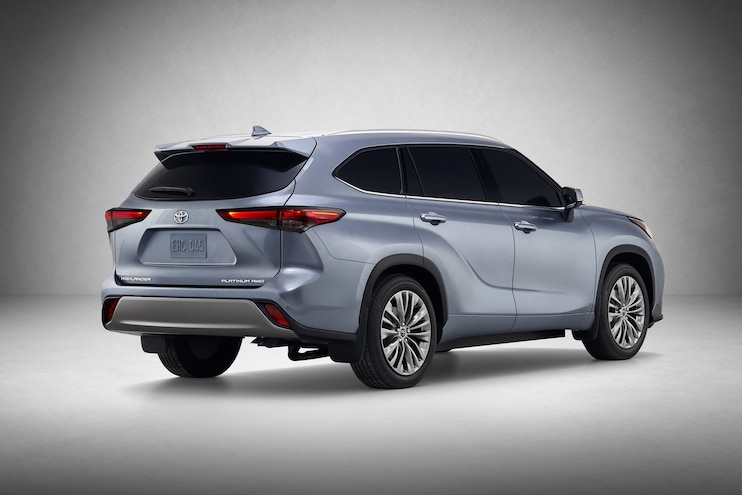 View Photo Gallery | 13 Photos
Photo 3/13   |   2020 Highlander Rear 3q
The hybrid will come standard with all-wheel drive thanks to those electric motors, one on the front and one on the rear. The I-4 and electric motors produce a combined 240 hp, down significantly from the outgoing Highlander Hybrid’s 306 hp. That’s due to the old model’s 3.5L V-6, swapped out for the smaller, more efficient I-4 in the new one. Toyota estimates the new powertrain will pay big dividends in efficiency, estimated at 34 combined mpg (up significantly from the 2019 hybrid’s 28 mpg).

Automatic engine idle stop is standard on every 2020 Highlander, helping save fuel when stuck in traffic or sitting at a stoplight. There are also a number of efficiency-minded features on the Highlander hybrid, including Auto Glide, which helps minimize engine braking to maintain momentum when letting off the accelerator. The hybrid also incorporates Predictive Efficient Drive, which takes data from the navigation system to analyze driving habits and road conditions, optimizing battery charging and hybrid operation.
The non-hybrid Highlander’s all-wheel-drive system comes packaged with a few unique features. On the L, LE, and XLE models, the system can send up to 50 percent of the engine’s torque to the rear axle if slip is detected, while the Limited and Platinum can be optioned with Dynamic Torque Vectoring AWD with Drive Mode Select and Driveline Disconnect. This system portions torque front and rear, as well as between the left and right rear wheels, improving handling and low-grip traction. Driveline Disconnect helps improve efficiency on dry roads, while Multi-Terrain Select optimizes traction controls and throttle response for Mud & Sand or Rock & Dirt. 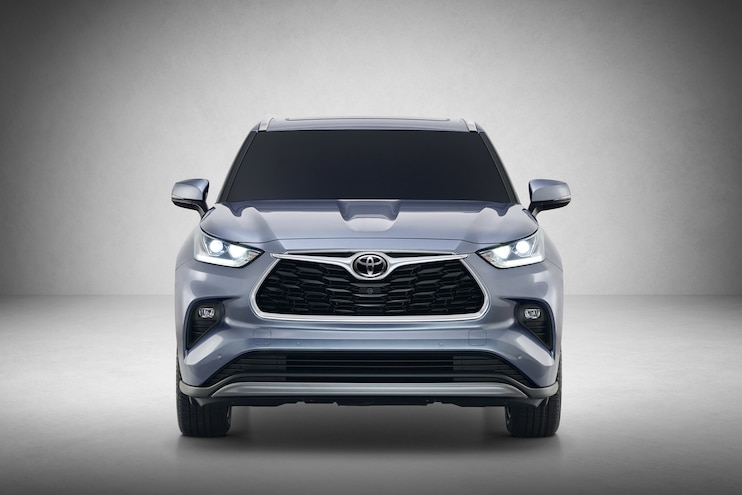 At 194.9 inches, the 2020 Toyota Highlander is 2.4 inches longer than its predecessor, with all of that space concentrated on the cargo area. As such, luggage space with all three rows of seats in place grows from a paltry 13.8 cubic feet to a more reasonable 16.1 cubes. With the third row folded, it boasts 40.6 cubic feet of cargo space, and with all seats stowed, there’s 73.3 cubic feet behind the first row. That doesn’t quite match the space of the stalwart Honda Pilot, whose cargo ranges from 16.5 cubic feet to 83.8.
The second row slides fore and aft a few inches, prioritizing cargo or third-row space as needed. On the base L and midlevel LE grades, the Highlander comes with second- and third-row bench seats with a total passenger capacity of eight, while the XLE and Limited come standard with second-row captain’s chairs and a third-row bench (the middle bench can be added back if buyers need eight seats). The top-spec Highlander Platinum comes only with the second-row buckets and the rear bench. 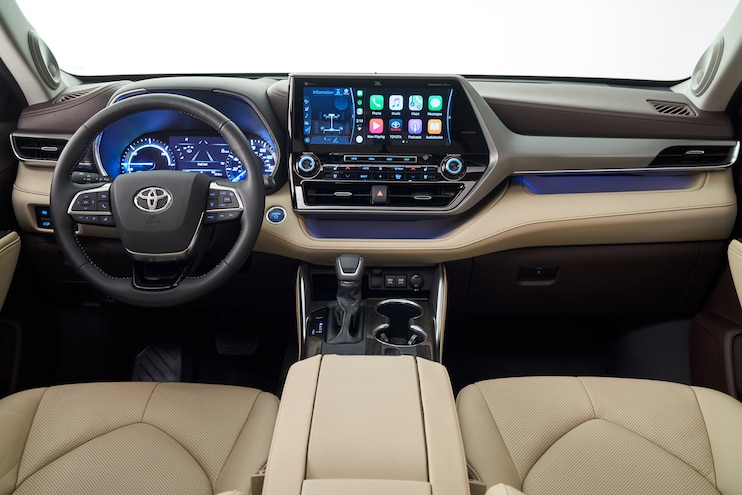 View Photo Gallery | 13 Photos
Photo 5/13   |   2020 Highlander Interior
Toyota has mercifully updated the Highlander’s technological suite to go along with the funky new interior styling. A sideways-pentagonal center stack hosts Apple CarPlay and Android Auto functionality, and there are plenty of storage solutions throughout the interior. The new Highlander’s interior is striking, particularly the Platinum trim seen here, thanks in part to the massive, segment-largest 12.3-inch touchscreen display and attractive tan and brown colorway. 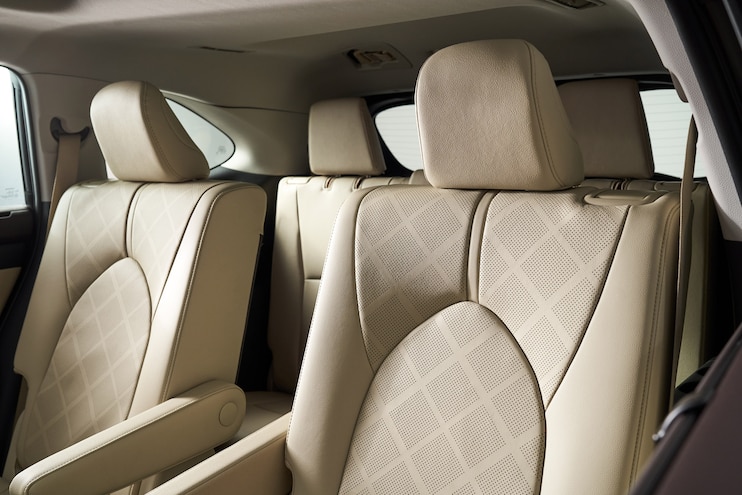 All Done Up With Somewhere to Go

Fortuitously, the 2020 Highlander avoids the trend of its Camry, Corolla, and Avalon stablemates’ robotic faces. Instead, the Highlander features a sleek front end with a trapezoidal grille that looks a bit like the one on the new RAV4, capped with an attractive winglet that carries the oval Toyota badge. Slim, aggressive headlamps look similar to those of the outgoing Highlander, though they’re a bit more elegant. A blacked-out A-pillar adds a little visual verve, but otherwise, the greenhouse is remarkably similar to the model it replaces.
There’s a bit more taper toward the rear end, stylistically backing up the aerodynamic front and rear bumpers. A distinct line that sweeps up from the rocker panel is the most obvious alteration between the previous-generation Highlander and the new one, and it’s a surprisingly attractive touch on the otherwise conservative exterior. Overall, the Highlander is more handsome and mature than its predecessor, and its slightly longer silhouette imparts more graceful proportions. But the 2020 Highlander will require second and third looks to distinguish it from its predecessor.

The 2020 Toyota Highlander will make its first public appearance at the 2019 New York International Auto Show, and we expect it in dealers before the end of the summer. Will it be as good as the competent Honda Pilot or the stylish Kia Telluride? Only time will tell.