Turbodiesel Gets Midsize-Sedan Fuel Economy, Tows Up to 9,300 Pounds 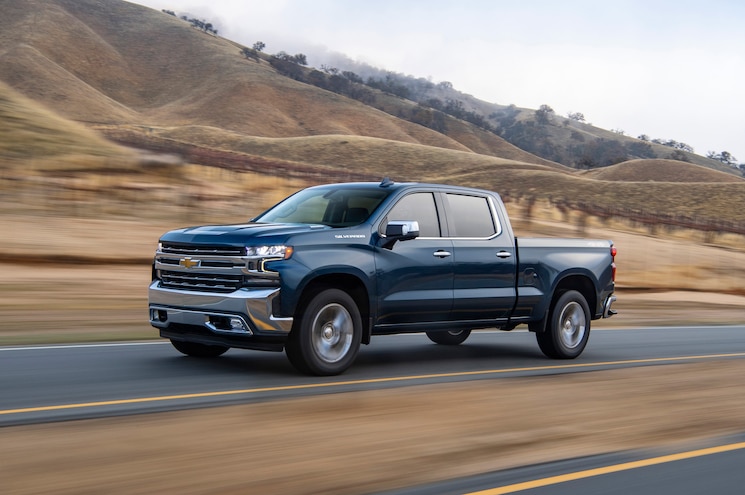 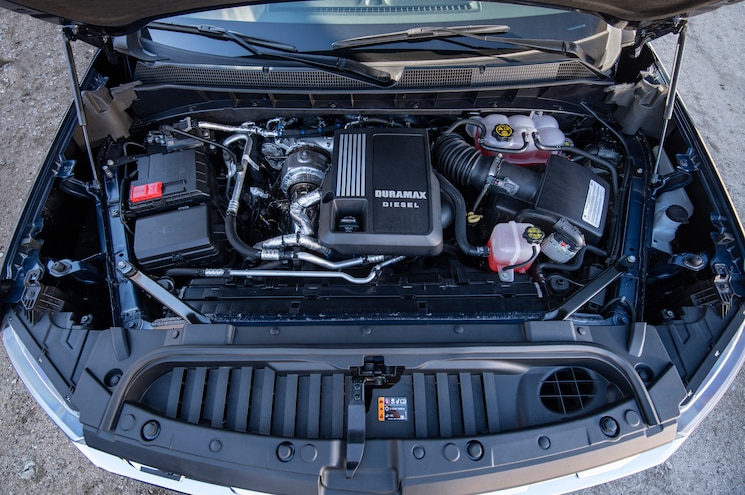 After more than 18 months of waiting since the product was first announced, Chevrolet finally released official efficiency numbers for the 2020 Silverado 1500 with the all-new turbodiesel 3.0L I-6. Silverado 1500 Duramax fuel economy is pegged at an astounding 23 city/33 highway mpg in two-wheel-drive configurations and 23 city/29 highway mpg for four-wheel-drive trucks, according to EPA testing.

Best Among Pickups, Impressive Among Cars

Tim Herrick, GM's executive chief engineer of Full-Size Trucks, rightly points out that those numbers aren't just the best of any pickup truck available today, they even eclipse the fuel efficiency of midsize sedans like the Honda Accord 2.0T, Toyota Camry V-6, and yes, even Chevrolet's own Malibu 2.0T.
"This is the day that Chevrolet went out and showed everyone exactly what we could do," Herrick said. 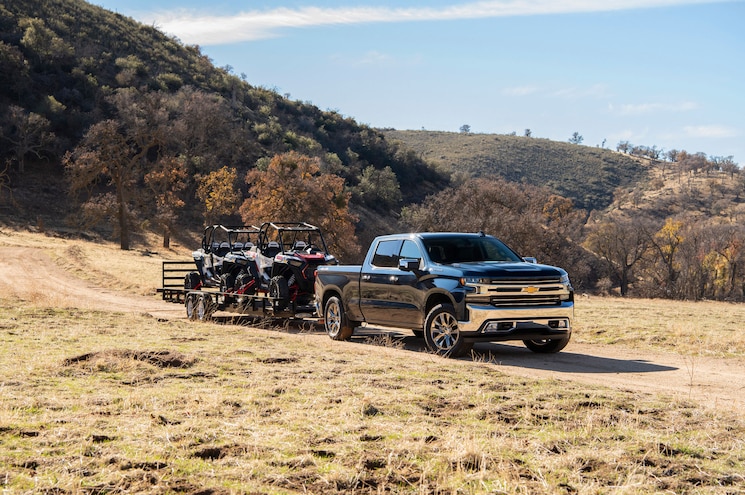 Compared to other diesel-powered light-duty trucks, the Silverado 1500 comports itself well. The Ford F-150 Power Stroke with two-wheel drive achieves 22 city/30 highway mpg, a number that drops precipitously to 20 city/25 highway for four-wheelers. The all-new Ram 1500's forthcoming diesel engine has yet to be fully revealed, but its 1500 Classic predecessor achieves 20 city/27 highway mpg with two-wheel drive or 19 city/27 highway mpg with four-wheel drive. The Silverado 1500 Duramax even achieves better fuel economy than its little brother, the 2.8L Duramax I-4-powered Colorado (20/30 for two-wheel drive and 19/28 for the 4x4).

As we reported in our deep dive of the 2020 Chevrolet Silverado 1500 Duramax, the engine is a clean-sheet design that incorporates lots of GM's most modern engine technology. One such feature is Active Thermal Management, which can plumb coolant to specific parts of the engine, speeding engine warmup and optimizing thermal efficiency.
Other accessories to the Silverado 1500 Duramax fuel economy game are the optimized aerodynamics and lightweighting program that apply to all of Chevy's new trucks, which help the truck's larger frontal area slice through the air more effectively. There's also that 10-speed automatic transmission that finds its way behind a variety of Silverado engines (as well as that Ford F-150 turbodiesel). With a wide ratio spread and snappy operation, the gearbox achieves the simultaneous goals of responsive performance and impressive steady-cruise efficiency. 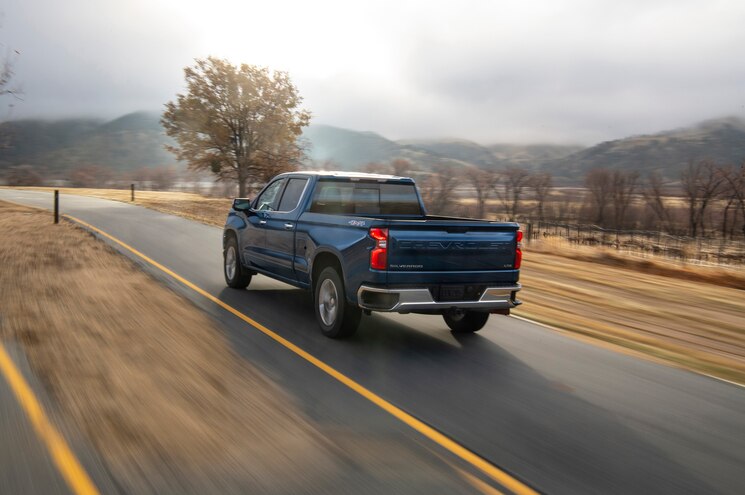 "We have great technology on the engineâActive Thermal Management, straight-six engine with no balance shaft, 10-speed transmissionâa full and integrated package," Herrick says. "We just have some really super-smart engineering, and you can quote me on that. "

Herrick also told us that the entire current-generation Silverado 1500 was designed around this engine, and that its design was a very early consideration for the pickup's development program. Knowing the engine's length, turbocharger placement, and more allowed engineers to idealize the Silverado 1500's cooling systems, engine bay and firewall dimensions, and engine support structures to incorporate the diesel completely into the design.
"We built this truck different from its predecessors because we had this engine square in our sights," he told us. "We knew at that time that this day would come when we would be able to show the world what we could do from a technology and fuel economy standpoint. We saw it right at the very beginning."

With over 700,000 Silverado 1500s sold through the new generation's first year of production, Herrick says the product has been an unqualified success for the company. What's more, GM anticipates about 10 percent of Silverado buyers to opt for the Duramax I-6, with some of those sales expected to enter fleets.
But Silverado 1500 Duramax fuel economy is just part of the budgetary story. Part of its appeal is its aggressive pricing, as it will be available on the LT, RST, LTZ, and High Country. On the latter two trims, the 3.0L Duramax I-6 will be priced identically to the optional 6.2L V-8, at $2,495 more than the standard 5.3L V-8. On the LT and RST, which come standard with GM's impressive 2.7L turbocharged I-4, the diesel will demand an additional $3,890. Here again, GM comes out ahead compared to other -ton diesel trucks. For example, Ford demands a whopping $7,590 for the 3.0L Power Stroke V-6 on the XLT model, due in part to a mandatory option package (on other trims, the diesel adds between $3,000 and $4,000). 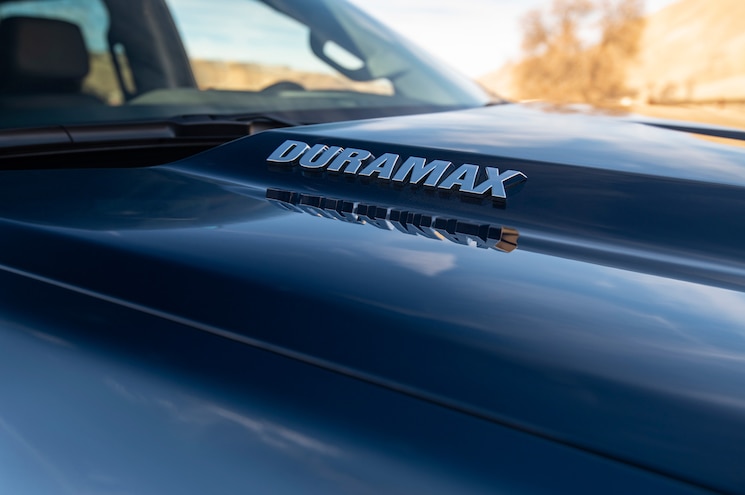 View Photo Gallery | 10 Photos
Photo 5/10   |   2020 Chevrolet Silverado 1500 Duramax Exterior Hood Badge
Of course, while the Duramax I-6 seems like a slam dunk, it is saddled to a truck that is not without its drawbacks. We've criticized the Silverado 1500's somewhat disappointing interior design and floaty driving dynamics before, but then again, it does offer a quiet and comfortable cabin and a truly massive, deep cargo box. There's a lot to like about the truck, and it seems like the Duramax will only add to its charm.
Chevrolet says the first diesels should arrive in customers' hands by the fall, and official pricing for the 2020 model year will be announced at that time. We anticipate it to slot in at just below $40,000 for the LT model, rising to about $60,000 for the High Country.
Source: Chevrolet