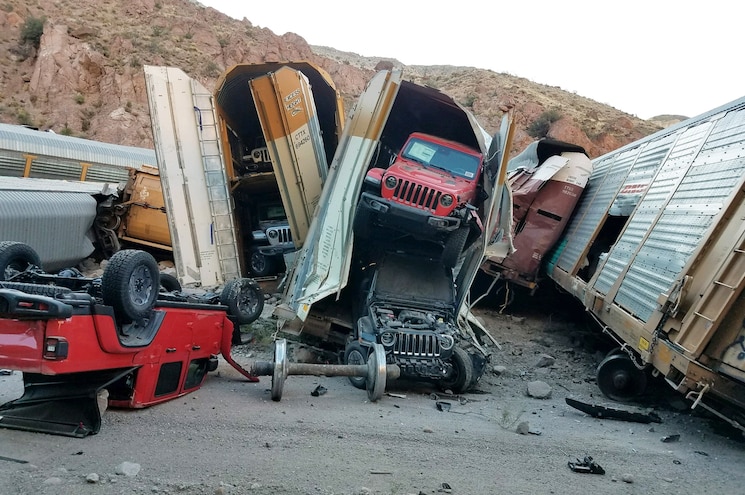 A train carrying Jeep Gladiator, Chevrolet Silverado, and GMC Sierra pickups (among other things) derailed in Lincoln County, Nevada, on Wednesday morning. In total, 33 of the train's cargo cars left the tracks, leaving "the most spectacular mess" that Lincoln County Sheriff Kerry Lee has ever seen. 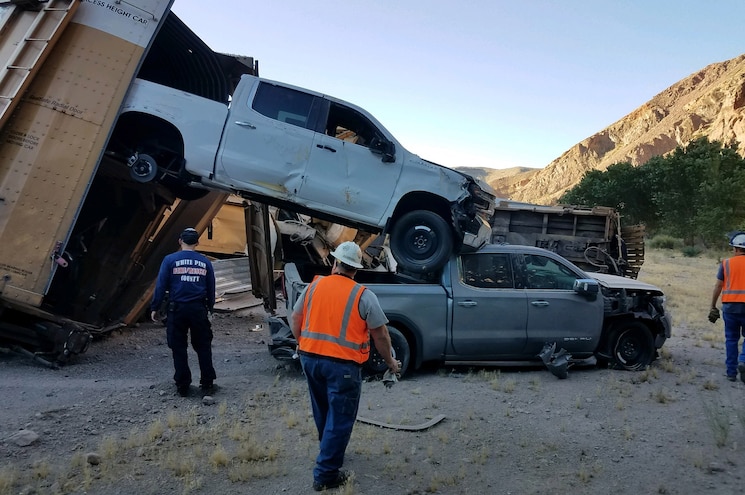 View Photo Gallery | 50 Photos
Photo 2/50   |   2019 Nevada Train Derailment 04
Luckily, the massive wreckage yielded no injuries, but unfortunately for pickup fans, strewn about the twisted metal were several examples of the new-for-2020 Jeep Gladiator, as well as plenty of Chevrolet Silverado 1500 and GMC Sierra 1500 trucks and a few Wrangler SUVs. It's not immediately clear how many passenger vehicles were damaged in the train derailment and to what extent, but it's probably safe to say there's going to be a slight shortage of Chevy, GMC, and Jeep vehicles at dealerships in the Southwest for at least a few weeks.
Occurring about 30 miles from the Utah-Nevada border in the southeastern part of the state, the train derailment also closed down County Route 4230 between Elgin and Carp until at least today, the Sheriff's Department reported. The route will be closed intermittently for the next several days while cleanup and construction take place. 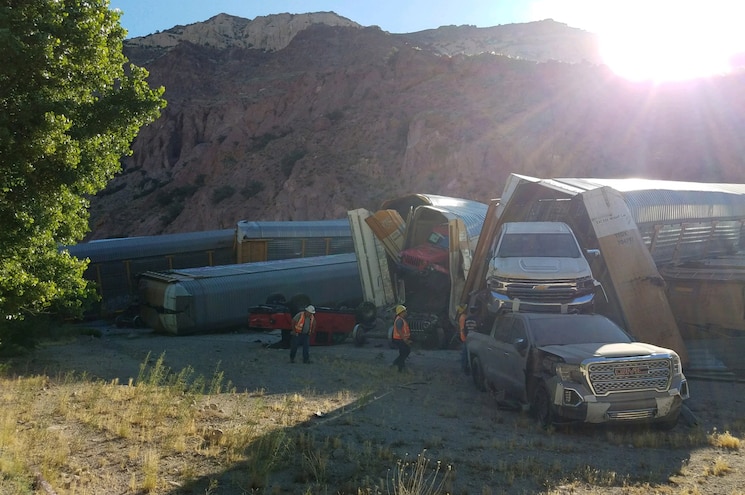 View Photo Gallery | 50 Photos
Photo 3/50   |   2019 Nevada Train Derailment 06
In addition to the 33 cars that derailed, the train was also carrying hazardous material, as reported by Fox 13 Salt Lake City. Those cars were not damaged in the accident, although one hazmat tanker was two cars away from the section of the train that left the tracks. Union Pacific Railroad is investigating the cause of the train derailment and will turn its findings over to the Federal Railroad Administration. Many of the passenger vehicles in the crash were riding in CSX automobile carriers.
Source: Lincoln County Sheriff's Department, via Facebook