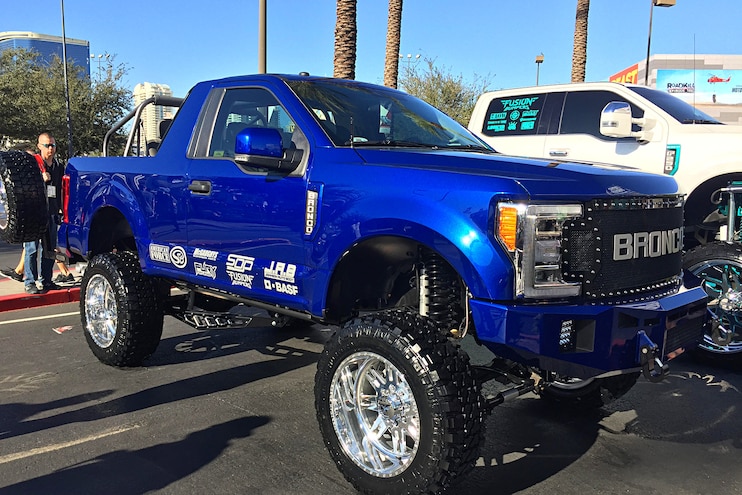 Once again, it's "that time of the year;" early November, and the 2019 edition of the SEMA Show is off and running at the Las Vegas Convention Center. When it comes to radically modified cars, trucks, buses, and bikes (and any other motorized vehicle you can think of), SEMA is the place you'll find it—inside the 1.2 million net square feet of halls and corridors in the convention center and throughout the display areas outside each building. In the custom-automotive space, SEMA is the "show of shows," and enthusiasts come from far and wide to experience it.
While the actual number of mind-blowing customs at SEMA 2019 is estimated at somewhere in the 1,500 range, to us, some vehicles rate higher than others in the "bad-ass" department because of their uniqueness, build quality, and performance (based on our quick assessment of their engines and powertrains, and/or details that builders always seem happy to share). 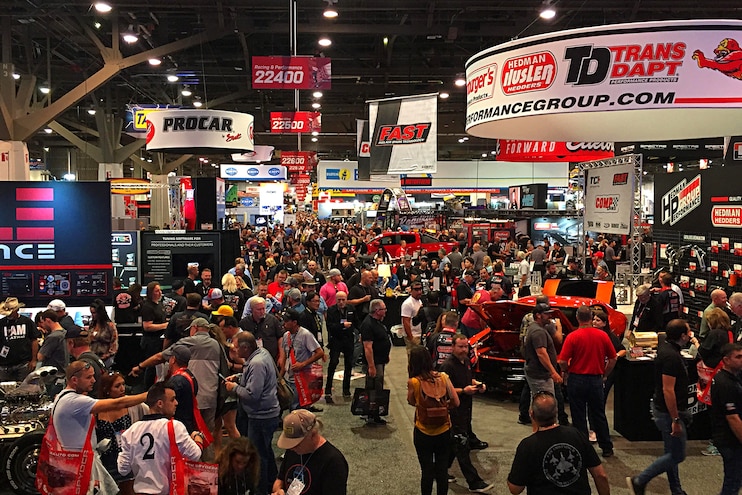 View Photo Gallery | 23 Photos
Photo 2/23   |   The SEMA Show brings more than 161,000 individuals, including: 71,000 buyer companies, 3,300 media representatives, 2,400 exhibiting companies, and representatives from more than 140 countries outside the U.S, to the Las Vegas Convention Center, for four days of the most spectacular custom-automotive displace in the world.
As the Truck Trend Network, of course, trucks, not cars (unless they're powered by diesels), are our team's main concern. Each day, we will bring you a rundown of ten awesome rigs—"builds," as they're called by almost everyone involved with the hobby—that we've encountered at SEMA. They are not ranked in any most-liked-to-least-liked order, and as you'll see when you read on, powerplants vary from gas, diesel, electric and even a jet.
The common factor for all of the rigs we will feature this week is that they are all very cool and deserve their moment in our coverage of the SEMA Show.
#MTSEMA19

While Jeep's Gladiator is the popular production pickup truck at SEMA, TJ Ryan's Ford "Bronco" is winning the race for cool, privately built prototypes. TJ's rig is founded on a '19 Ford F-350 regular cab longbed and features a 6.7L Power Stroke and ten-speed automatic transmission. A lot of cutting went into making this rig, but the finished product, with its out-of-the-box McGaughy's suspension, 22x12 American Force wheels, 37-inch Fury tires, Fusion bumpers, and, of course, wicked rear "tub (created with the stock bed)" and paint by Johnson Auto Body, is something that actually gives us hope for the future, if the real deal is anything close to being this cool. 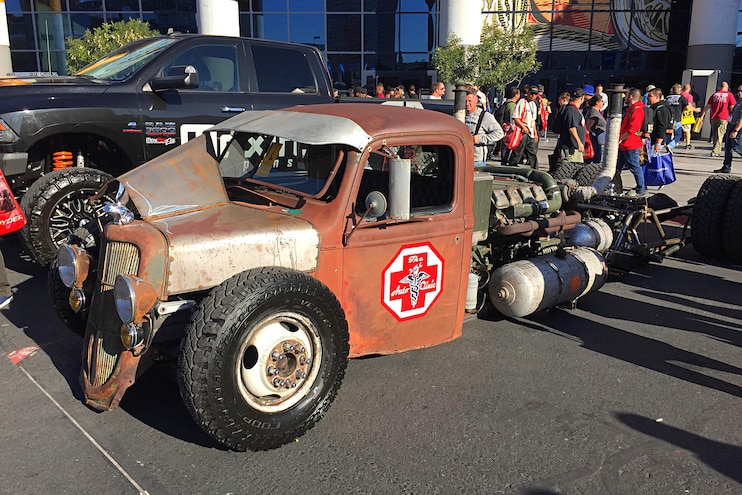 View Photo Gallery | 23 Photos
Photo 6/23   |   We didn't see much detail about this wild rig, but we definitely hope to learn more about it, especially the massive rear-mount diesel engine that makes it move. 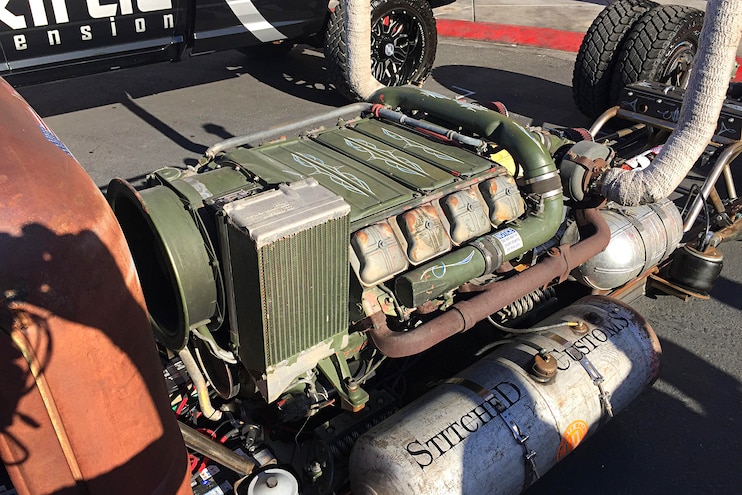 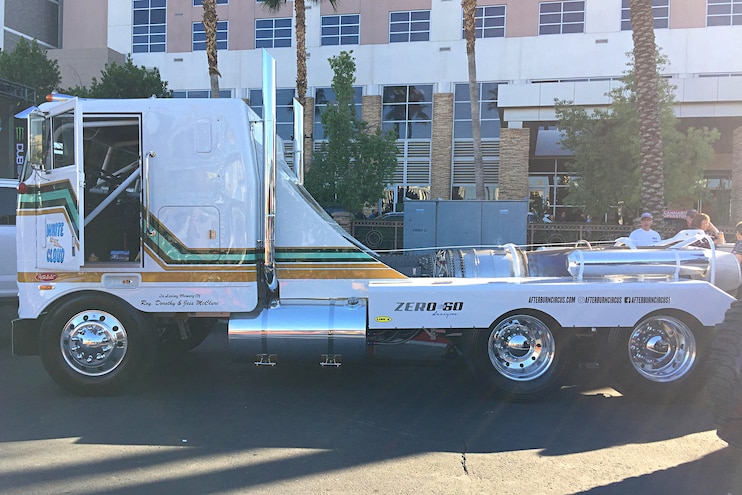 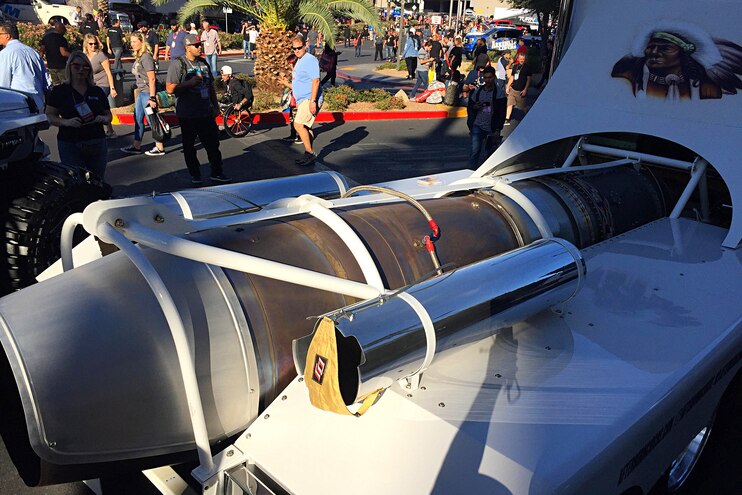 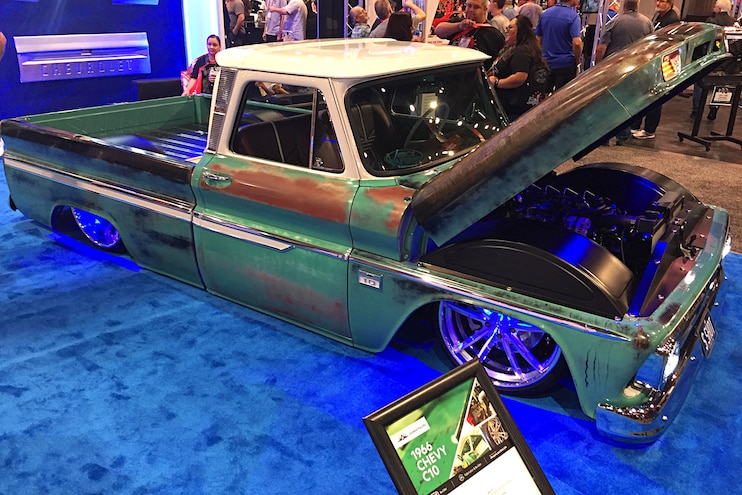 View Photo Gallery | 23 Photos
Photo 10/23   |   While there are quite a few Chevrolet "C10" pickups displayed throughout #MTSEMA, this one, a '62 built by Johnny G, defines the cool and different ways that Cummins' R2.8L crate engine can used in a project. 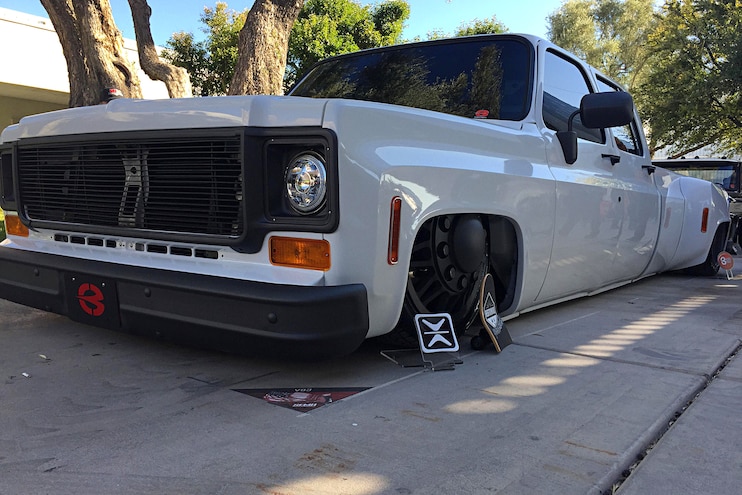 View Photo Gallery | 23 Photos
Photo 11/23   |   As these things go, every truck guy (or gal) has a soft spot for a classic Chevy "square body" pickup. Thanks to air bags, this crew cab dualie is slammed HARD and we dig it! 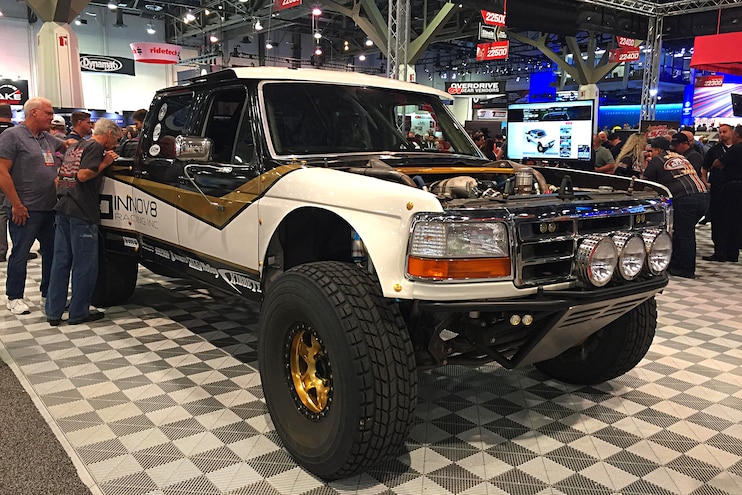 View Photo Gallery | 23 Photos
Photo 12/23   |   Old-bodystyle Fords are just as popular today. Seeing one—especially a crew cab—done-up for the desert (we believe by Ryan Kibbe's crew at Kibbetech Offroad) was an appreciated surprise for the OBS faithful at the SEMA Show. 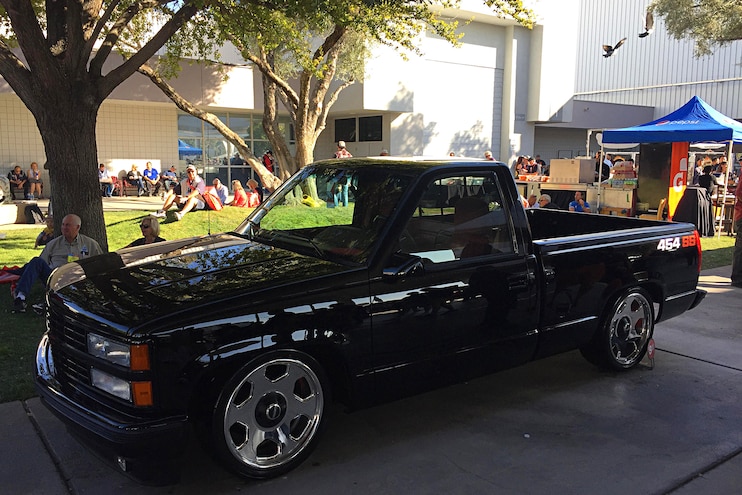 View Photo Gallery | 23 Photos
Photo 13/23   |   During its brief heyday (2002 to 2006), Chevrolet's Silverado 454 SS was the hands-down hot rod of the fullsize pickup segment. We found this black beauty among the hundreds of trucks parked outside and gravitated to it because with exception of wheels, it appears to still be in fairly as-sold condition. As Diesel Power Editor-in-Chief KJ Jones has noted, the '20 Silverado 1500 diesel is an unofficial (but we bet Chevy may have had a little "intent") second coming of a GM-built fullsize that gets up and goes. Seeing such a clean example of the truck that set things off was awesome. 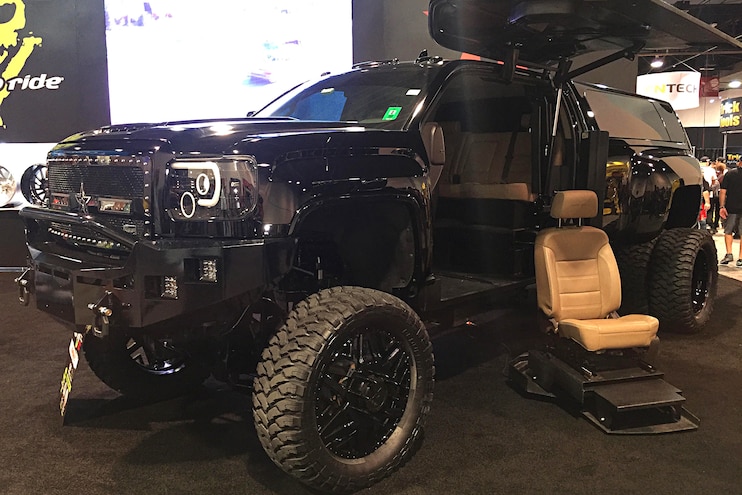 View Photo Gallery | 23 Photos
Photo 14/23   |   Be it at SEMA, or any other major public display, it's always very cool to see trucks that are featured in Diesel Power get their deserved shine (pun intended) at the highest level. Jonathan Barber's '18 GMC Sierra 3500HD Denali graces the RBP booth in SEMA's Central Hall. We first encountered this beautiful and super-trick rig at Rudy's Performance Parts' Spring Truck Jam, and Chris Tobin's report on it (http://www.trucktrend.com/features/1909-unbroken-2018-gmc-sierra-3500hd-denali/) tells everything about how totally cool this rig is. 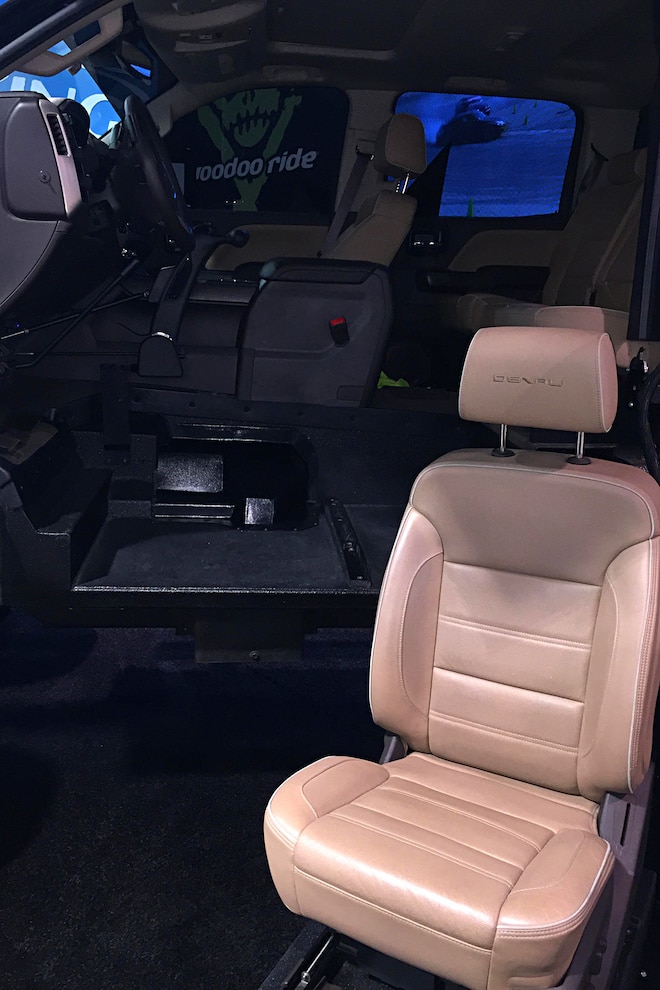 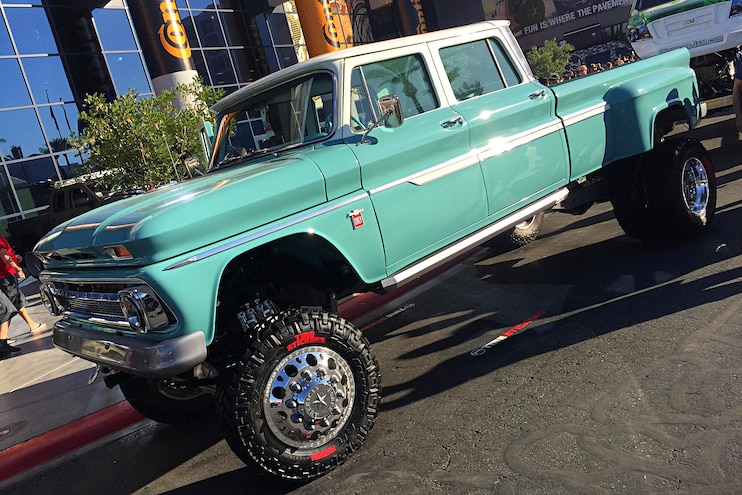 View Photo Gallery | 23 Photos
Photo 16/23   |   One of the downers (if you can believe there actually are downers) about trucks displayed at the SEMA Show is the unfortunate fact that some rigs are displayed without one iota of information about them. Clearly, this early Chevrolet C10 has all kind of merits (tastefully lifted, crew cab, dualie, and we believe it has a 6.6L Duramax under the hood), that we hope to confirm by catching up with the builder at some point during the show week.