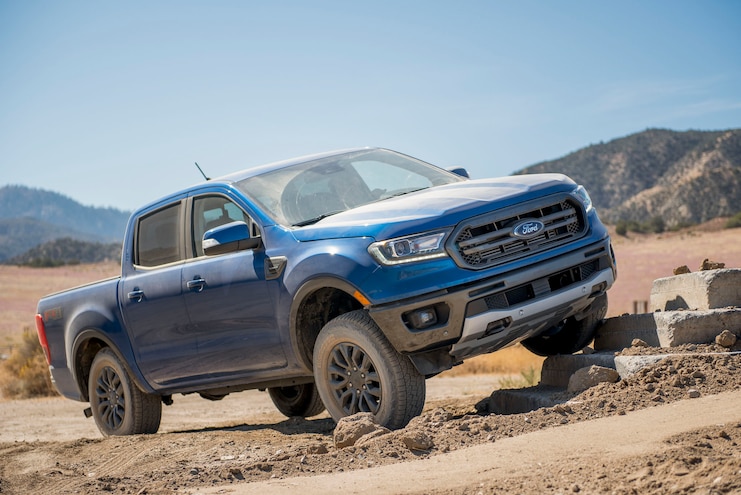 Enthusiasts acted shocked when Ford pulled the plug on the Ranger after it was on the market just shy of three decades. Launched in 1983, this compact pickup quickly became one of Ford's best-selling vehicles, moving nearly 350,000 units at the peak of popularity in 1999. The reality was no one was surprised when Ford discontinued the compact Ranger in 2012. Sales had slowed, fuel economy couldn't keep pace with the new (larger) midsize competition, and Ford was pushing hard for pickup buyers to move into EcoBoost-powered F-150s. 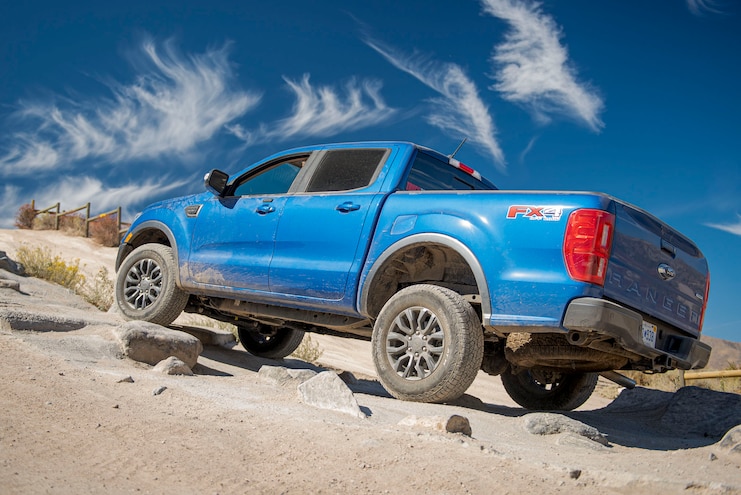 Thankfully, the Ranger nameplate lived on overseas and, due in part to consumer demand combined with an exploding midsize segment, Ford brought the Ranger back to the U.S. for the 2019 model year. Though the truck was eligible for our test last year, production hadn't begun at the time of testing, so its eligibility carried over.

Competition in the midsize segment is fierce, with the Ranger going against the likes of the Colorado, Canyon, Ridgeline, and Frontier. To get to market quickly, Ford gussied up an aging global platform and tossed it on dealer lots. Still, the truck holds up very well.

Our judges appreciated the technology the Ranger brought with it. The digital driver-information-center displays more content than most people can comprehend, and its customization ability is icing on the cake. One of our biggest dislikes, however, was the lack of a traditional tachometer. Though not really necessary with an automatic transmission, it was missed by most. 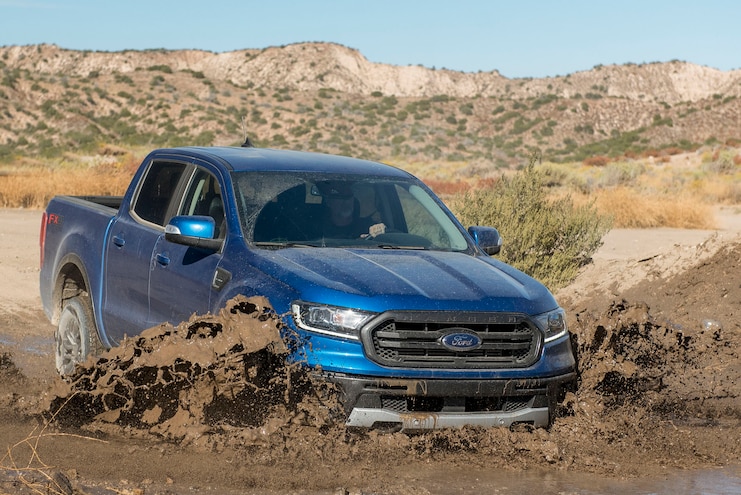 What was updated for the U.S. market was the drivetrain. Ranger offers just one option: a 2.3L EcoBoost I-4 mated to a 10-speed automatic transmission. This combination, making 270 hp and 310 lb-ft of torque, was loved by nearly all our judges. The powerful engine, combined with Ranger's relatively light weight, enabled it to pull off the quickest 0-to-60-mph time of the test, at just 7.39 seconds. The Ranger also snagged the quickest unloaded quarter-mile time, at 15.88 seconds. When hitched to a 5,000-pound trailer the Ranger also recorded the least performance degradation, nabbing it all three of the top empirical towing scores.

Speaking of towing, after leaving the track, we again saddled the Ranger with a 5,000-pound trailer and pointed it up the 6-percent grade of the Cajon Pass. Unsurprisingly, the truck had no issue pulling the grade at speed. Because of the Ranger's diminutive size and the length of the trailer in tow (16 feet), it got a tiny bit of tail-wagging-the-dog effect at times, but never enough to be alarming. Descending the grade, we wished Ford had installed the available integrated trailer brake controller, which was one of the only options not included on our tester. Nevertheless, the truck's service brakes handled the job just fine, and tow/haul mode kept the 10-speed in the proper gear. 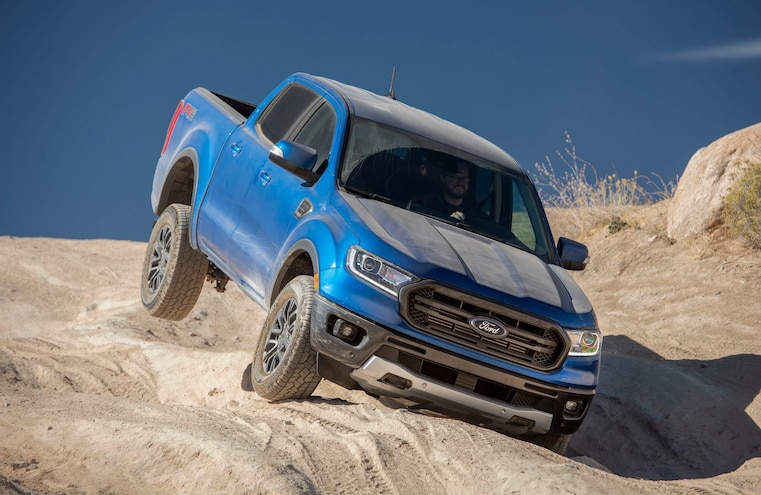 No one complained on long highway slogs, as the Ranger is quiet and comfortable at speed. The premium B&O audio system churned out great tunes, and the truck's available Apple Car Play kept us entertained and pointed in the right direction. Much like the big trucks, the Ranger comes with Sync 3. And while it's not terrible, we wouldn't mind a refresh to the system.

When pavement gave way to dirt, the Ranger became even more fun. Even though we couldn't take its doors and roof off like the Gladiator, because of its small size and big power, the truck performed like a UTV. Adding the FX4 package to the truck brought with it unique shocks, skid plates, and a selectable rear locking differential. Also included was Ford's trick Trail Control system, which acts as cruise control for the dirt. Relatively low ground clearance was the its biggest issue in the rough. Aside from that, it was almost universally loved. 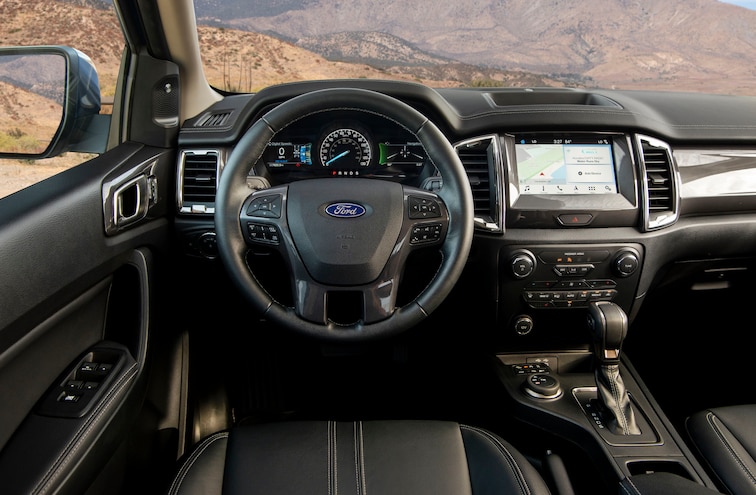 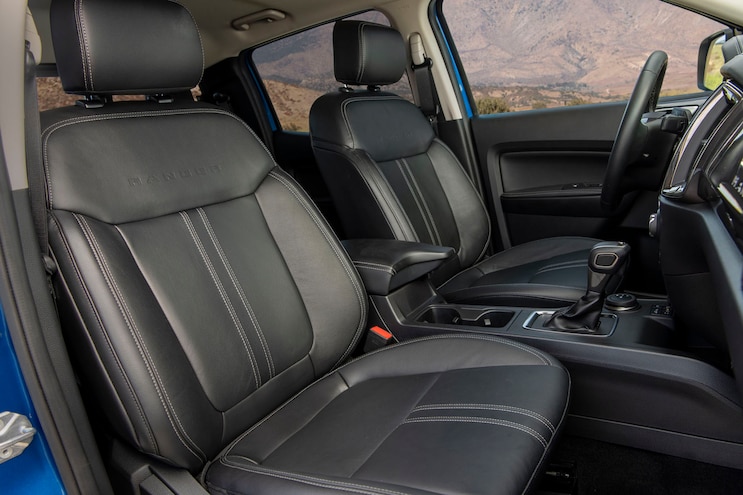 Overall, the Ranger was appreciated by most everyone on our test. While it wasn't a runaway standout in any one category, the it performed admirably all around. The truck is quick and powerful, tows well, is comfortable on the highway, and competent off-road. Despite the love, when the week of testing came to a close and the scores were tabulated, we found Ranger in the bottom third of the group. We don't fault the Ranger for this; instead, it reflects the caliber of trucks being tested. We're pretty certain when Ranger gets refreshed in a couple of years (it is a pretty old truck, after all), it'll be a real contender.