Give Us All Of The Torque! 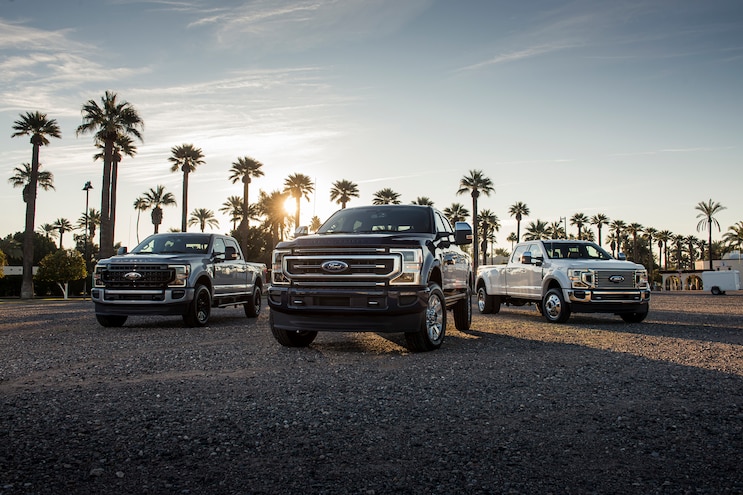 We announced back in December that the 2020 Ford F-250 Super Duty had won the Truck Trend Pickup Truck of the Year award. And we've been fielding a certain level of hate mail ever since because Ford had embargoed the drive impressions for a full month after we made our announcement. Thankfully that embargo has been lifted and we're now free to talk about all the things that make the 2020 Super Duty great.

Unlike the competition, Ford's updates for 2020 are more of a mid-cycle refresh than a full overhaul. Nonetheless, the largest and most important changes are found under the hood. For 2020 Ford introduced the third-generation of its 6.7L Power Stroke V-8 diesel engine. This engine, through significant internal upgrades, now churns out 475 horsepower and 1,050 lb-ft of torque. And customers can have this engine from the smallest F-250 to the largest F-450. 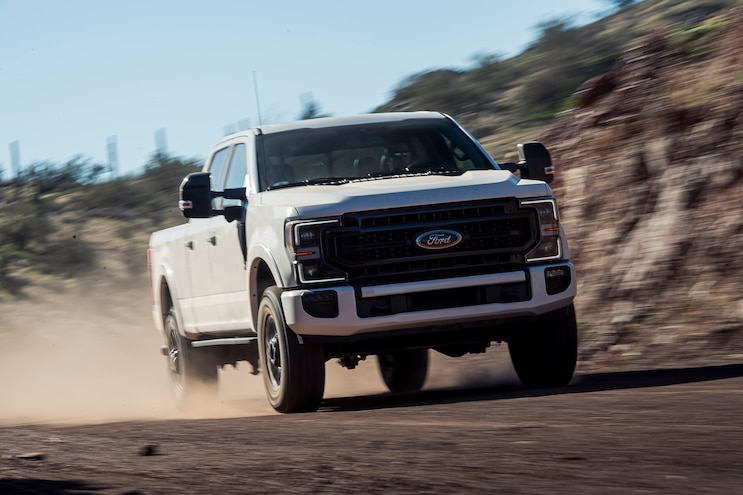 Also new for 2020 is the addition of an all-new big block 7.3L V-8 gasoline engine to the lineup. This engine pumps out a class leading 430hp and 475 lb-ft of torque and slots between the old 6.2L gasoline V-8 and the 6.7L Power Stroke. Backing these engines is a new 10-speed TorqShift automatic transmission.

In addition, the 2020 Super Duty trucks also receive a mild facelift with new headlights and grilles, along with a new tailgate applique.

That's Nice, But How Does It Drive?

In one word, amazing. We love everything about the new Super Duty drivetrains. Power delivery from the new Power Stroke diesel engine is instant, with just the faintest hint of turbo lag. While it's quick from zero to 60 miles-per-hour (just 7.5 seconds in our testing of an F-250 crew-cab Limited) it's must quicker accelerating from 50 to 80 in a passing type situation. Power rolls on smooth and just keeps building all the way to redline. While not a negative, because of this type of power delivery we can pretty easily tell that there's a fair bit of torque management going on, likely to preserve drivetrain components. Having 1,050 lb-ft of torque on tap in an unladen -ton pickup is just ludicrous. 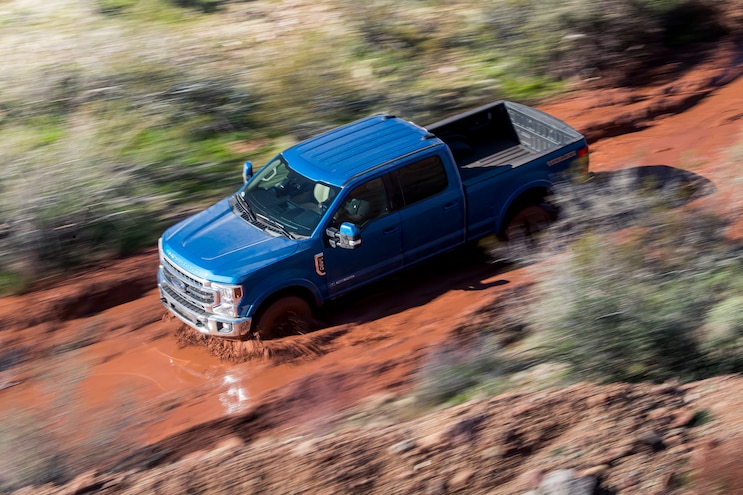 While the Power Stroke is good, we absolutely adore the new big-block 7.3L gasoline V-8. We love the abundant power and its instant delivery. The engine thrums along happily with an invigorating exhaust note all the way to 6,000 rpm. Our only real complaint revolves around fuel economy, as during our 1,000 miles of testing we managed to average just 10.03 mpg with a best tank clocking in at 13.21 mpg. While not great, it wasn't unexpected either.

What really brings both of these drivetrains to life is the all-new 10-speed TorqShift automatic transmission. Based very loosely on, and scaled up from, the 10-speed transmission found in the F-150, this new gearbox fires off shifts with lightning quick speed. Shifts are firm, but not overly rough, and we noticed in normal driving it will frequently skip gears. These gear skips, however, are not discernable other than by watching the readout in the truck's information center. During all of our testing, with both the 7.3L gas engine and 6.7L Power Stroke, we we're never able to trip up the transmission, it just always found its way to the correct ratio. 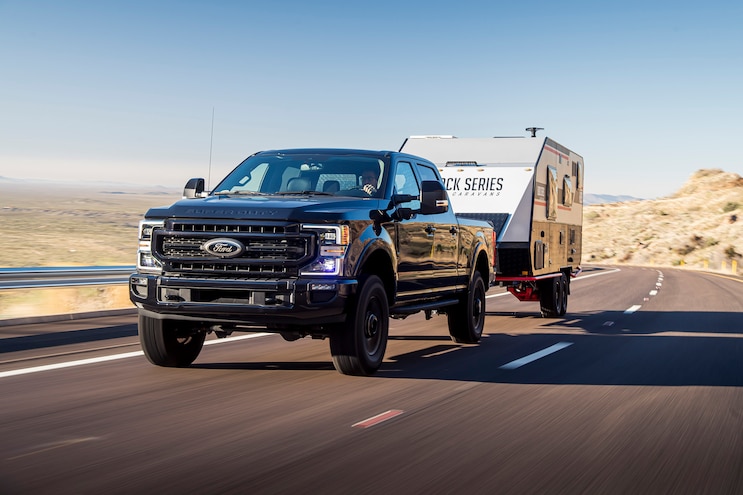 According to Ford the 2020 Super Duty is best-in-class and best-in-segment in just about all of the major towing categories. F-450 tows a maximum of 37,000 pounds, while F-350 can take a 32,500-pound fifth-wheel for a ride. They also tout the highest -ton towing of 22,800 pounds. To sample this Ford brought us to a steep and windy mountain pass outside of Congress, Arizona. This particular road features a steep 6-percent grade that goes on for miles.

Because few people possess commercial driver's licenses, us included, Ford offered a selection of trucks saddled with conventional, gooseneck, and fifth-wheel trailers that all weighed in at about 10,000 pounds. When paired with the Power Stroke diesel engine the trucks, both F-250 and F-350, gave almost no indication that a trailer was attached. Not even the 30-foot bumper-pull toy hauler could upset the truck. They felt incredibly planted, even in tight curves and stiff wind, and had power to pull the hill at speeds much faster than legally allowed. 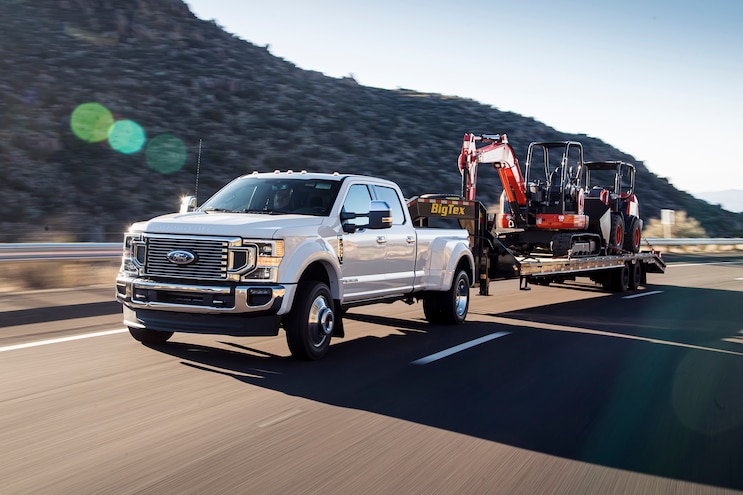 The 7.3L gasoline V-8 showed a little more struggle towing up the pass, due to having less than half the torque of the Power Stroke. Nonetheless, it was no slouch. With the same 10,000 pounds in tow we were able to readily pass slower traffic, even on the steepest part of the grade. Engine noise was noticeably greater with the gas engine than the diesel, but it wasn't bad enough to really complain about. Besides, the exhaust note produced by the new big block is still music to our ears, even when it's spinning 6,000 rpm.

Descending the grade was a nonevent as well. The Power Stroke's engine braking held the truck and trailer at the perfect speed, while the 10-speed transmission worked to downshift aggressively to maintain the proper gear when mated to the gas engine. Service brakes are adequate and carry over from the previous year.

Finally, we had the opportunity to ride along in an F-450 crew-cab saddled with 40-foot equipment trailer loaded to just a touch over 30,000 pounds. Flat out the truck attacked the grade and was able to maintain 50 to 55 mph the entire way to the top. Which, when you think about it, is pretty darn impressive. 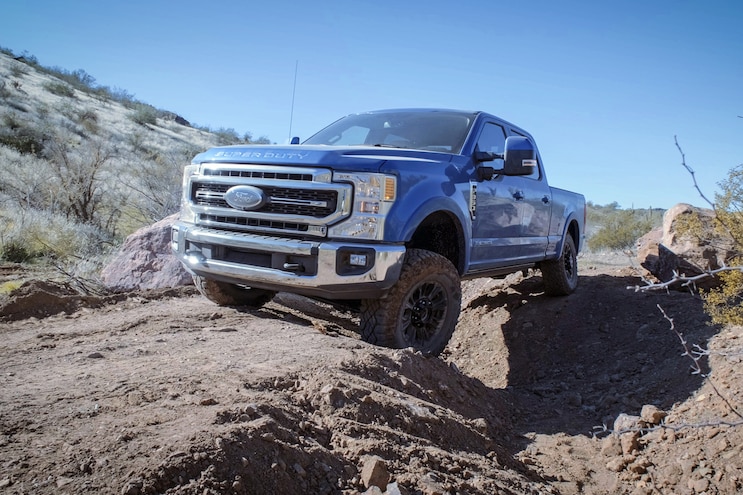 Isn't There A New Off-Road Package Too?

Also new for 2020 is the Tremor off-road package. The Tremor package brings unique front coil springs, which provide a two-inch lift, large 35-inch Goodyear Duratrac tires, a locking rear differential, a limited slip front differential, and aggressive styling to both F-250 and F-350 Super Duty trucks. Of course, the trucks need to be four-wheel drive, but to be eligible for the Tremor package they also need to be crew-cab and either XLT, Lariat, King Ranch, or Platinum trimmed.

Ford built a gnarly off-road course for us to play with Tremors on. This course featured a burly rock crawl, several steep climbs, even steeper descents, ruts, logs, ditches, water holes, mud bogs, and even a deep splash pit. Basically, everything an off-road enthusiast enjoys doing. Unsurprisingly, the Tremors crushed the course. The trucks flex incredibly well thanks to a small front sway bar, and traction was never an issue with the locking rear differential and Goodyear tires. Approach and departure angles are great, as it breakover, meaning we only tapped the trailer hitch to the ground once or twice.

Graded dirt roads are super smooth (for a 1-ton truck anyway) thanks to Tremor's larger 45mm shock absorbers and dual rate front coil springs (both F-250 and F-350 use F-350 rear leaf springs). The Tremor also comes standard with Ford's new Terrain Control, plus a new 'rock crawl' mode is included in the truck's selectable drive modes, which is a first for Super Duty trucks. So, You're Saying It's Pretty Good

Overall, the 2020 Ford Super Duty lineup of trucks hits a homerun. They have an abundance of power, tons of tech, mind bending capability, and off-road performance that's matched by only one in the segment. Powertrains are fantastic, and the rest of the updates have been wisely made. And, at the end of the day, Ford is the only manufacturer to offer massaging seats in a heavy-duty truck it's your move Ram and GM