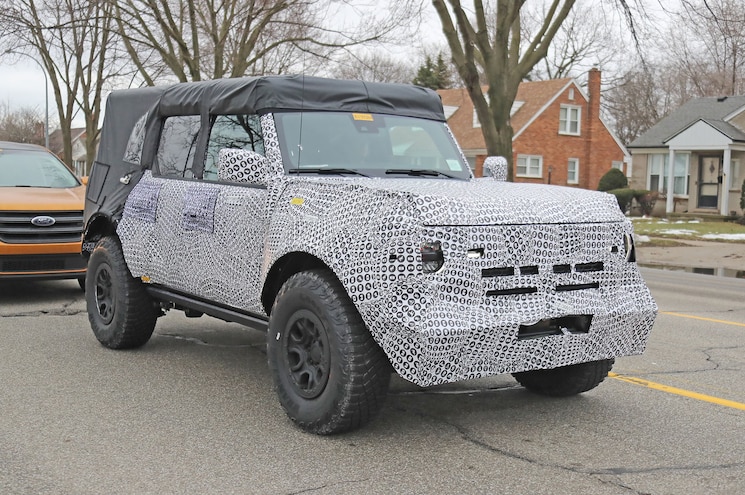 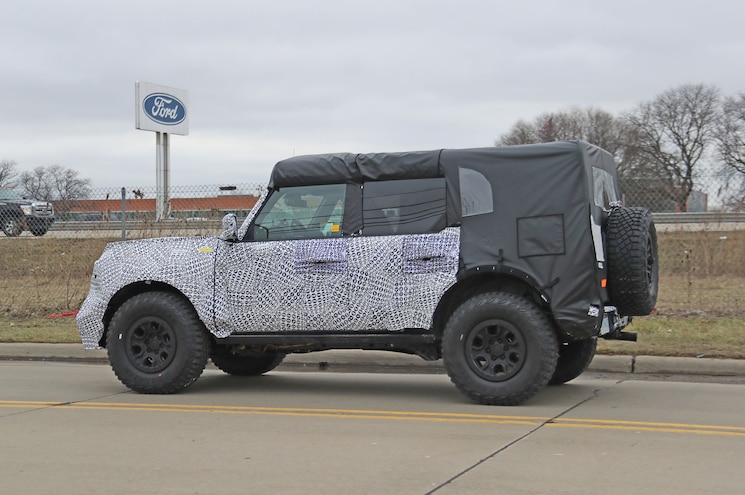 If the standard, plain-Jane Ford Bronco isn't rugged enough for you, then you might be interested in this vehicle spotted in Michigan recently. With more off-road goodies than other Bronco mules we've seen, could this be the 2021 Ford Bronco Raptor, built to battle the Jeep Wrangler Rubicon Recon?

Is a Ford Bronco Raptor on the Way? 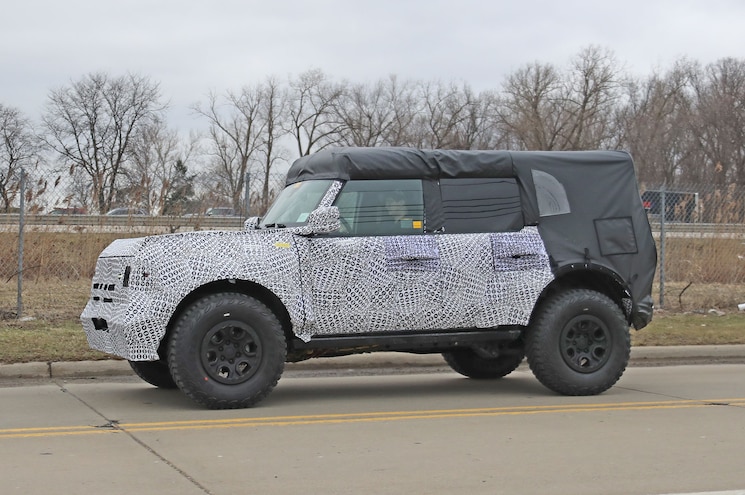 Immediately visible on this test mule is a taller, wider stance, likely the result of the SUV's Goodyear Wrangler Territory mud tires and some unseen suspension tweaks. Measuring more than 34 inches tall, the tires are beadlock-mounted to the rugged Bronco's 17-inch black-finished wheels.

Wider front and rear fender flares accompany the new, elevated stance. However, it's not immediately clear if the increased track width is through axle and suspension changes ( la F-150 Raptor) or merely through wider tires and altered wheel backspacing (as on the Toyota Tacoma TRD Pro). Regardless, the Ford Bronco Raptor (or whatever it ends up being called) is likely much more useful in off-roading situations than the vehicle we've already seen. 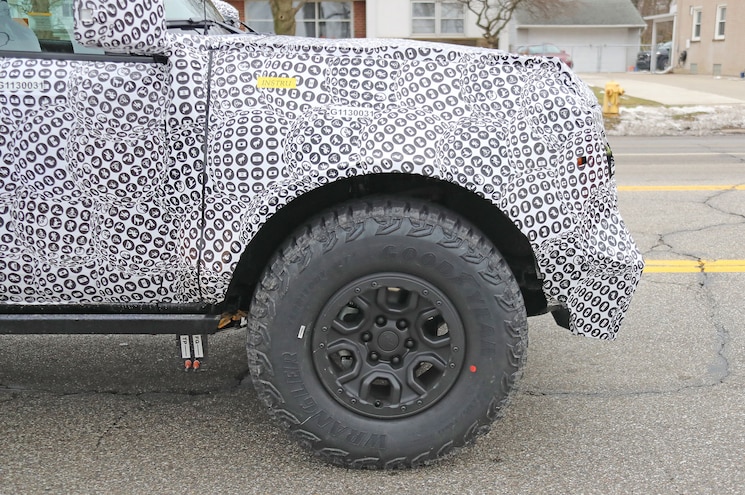 In addition to the obvious changes, the 2021 Ford Bronco Raptor will almost surely feature at least a few hardware alterations—monotube shocks (or remote-reservoir units), electrically actuated sway bar disconnects, front and rear lockers, and more. As on the F-150 Raptor, the hardcore Bronco variant should also receive driver-selectable tuning for the steering, transmission, throttle, and stability and traction controls. 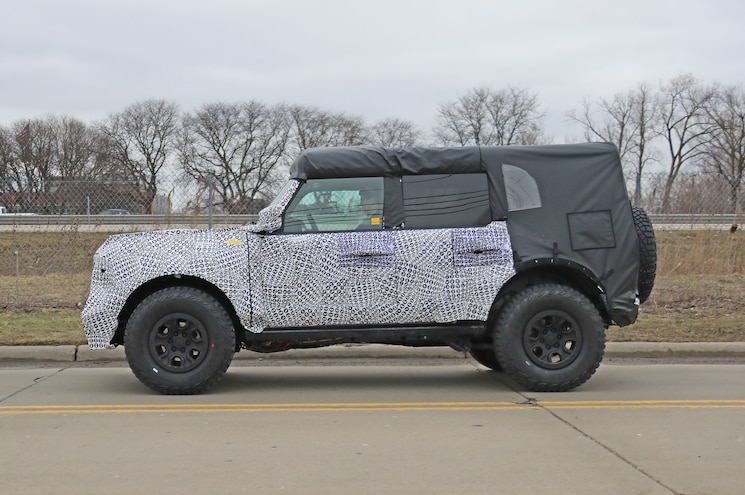 View Photo Gallery | 30 Photos
Photo 5/30   |   2021 Ford Bronco Raptor Special Exterior Side Profile
Given its overall stance, we predict this particular Bronco to be optimized for forest trails and tighter two-track than the widebody, trophy truck F-150 Raptor. That would also suit the Bronco's mission as a Jeep Wrangler rival.
Peering through the camouflage reveals round, retro headlights bifurcated by a modern-looking center bar. The grille texture is also visible under the wrap, and it looks appropriately vintage, featuring rounded rectangle cutouts that recall the first-generation Ford Bronco. 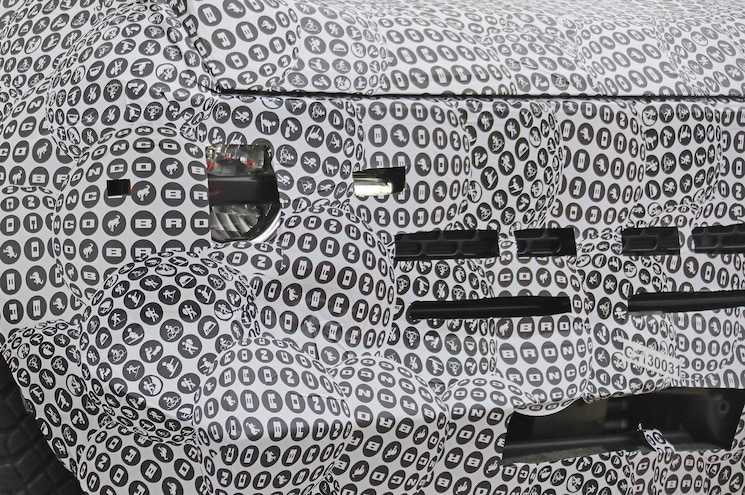 The 2021 Ford Bronco will be revealed sometime this spring, according to the company, and we'd predict it to arrive in stylish (but on-road-oriented) models as well as harder-core off-road trims from the outset. However, Ford will likely show off a range-topping model a few months after the general Bronco unveiling, keeping public anticipation for the SUV high. 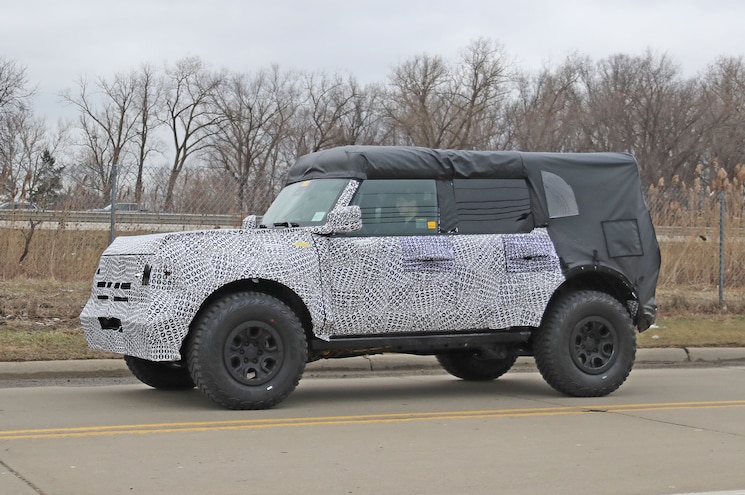