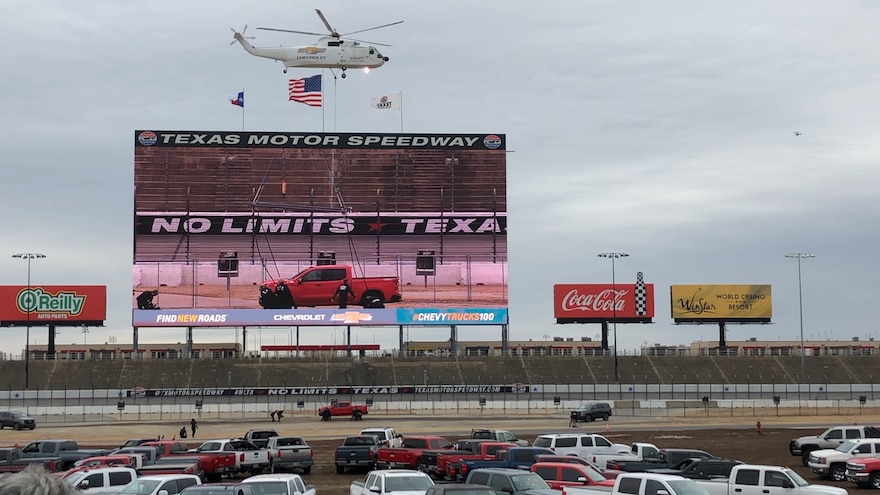 Chevrolet pulled the covers off its all-new and hotly anticipated 2019 Silverado 1500 today in glorious fashion. They did this by airlifting the pickup, a bright red Trail Boss edition, into the infield at the Texas Motor Speedway. At the culmination of the Chevy Trucks Centennial Celebration event, which featured NASCAR legend Dale Earnhardt Jr. and his 1988 S-10 along with 100 Chevy trucks of all ages and types spelling out a giant “100” in the infield, the sound of a heavy lift helicopter filled the speedway. What appeared over the world’s largest HD television, nicknamed “Big Hoss” was the truck dangling on a line below the helicopter. The cargo gently touched down and was unloaded before being driven on stage for its world debut.
View Photo Gallery | 24 Photos
Photo 2/24   |   004 2019 Chevrolet Silverado 1500 First Look
We still don’t know much about the truck, other than how it looks, since the company is saving that information for the 2018 North American International Auto Show in Detroit in a few weeks. They did say that there will be more drivetrain choices than ever before, more special editions, and the bed will remain the same heavy-duty roll-formed steel. The truck shown was a special Trail Boss edition, with a 2-inch lift and off-road tires. Details were incredibly sparse, all done on purpose.
The truck made a quick exit after spending about five minutes on stage, so we’ll have to wait a few weeks for a better look. What we did notice are a hand full of styling queues taken from Colorado, a few from the competition, and several unique niceties that will take some getting used to.
Take a look through the pictures and let us know what you think of the all-new 2019 Silverado 1500!